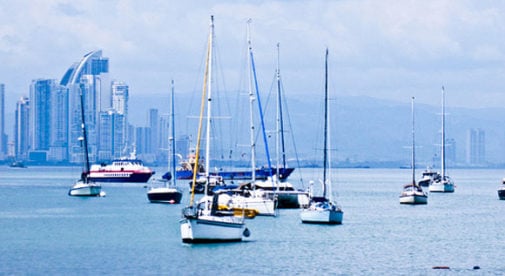 When it’s time to retire, you won’t find Ann Roess sitting on the porch with a pair of knitting needles, or her husband Mike puttering around the yard with pruning shears. Instead, the Minnesota-based couple will be cruising the Caribbean aboard their yacht Escapade.

And by buying their sailboat in Panama, Ann and Mike saved at least 15%. “Boats are marketed in Florida and the Chesapeake, Virginia, area,” says Mike. “When we started to look for a boat, we found that the boats that were in those areas were more expensive. We did look in Fort Lauderdale, but we realized pretty quickly that we could get a better deal if we were willing to go to a foreign country, and that it would be fun.”

They found Escapade—a Hylas 49 sailboat, which sleeps up to eight people—on Yachtworld.com, a website that connects boat sellers and buyers. A Spanish mariner owned the boat and docked it in Panama. The Roesses had a gut feeling that it was the right boat for them, so Mike hopped on a plane.

After landing in Panama City, Mike traveled to Shelter Bay Marina—situated at the Caribbean entrance of the Panama Canal—to meet up with the owner and check out Escapade. Mike was thrilled with the vessel, so, after getting the green light from Ann, he bought it.

The boat-buying process works about the same way as purchasing a house. Before selling a craft, the owner has to get a survey, which is similar to the home inspection required when selling a house. A survey is a critical step, particularly for the buyer, because insurance companies won’t insure a vessel without one.

The paperwork and terms associated with a boat loan are similar to those of a home mortgage, with slight variations from country to country. Typically, when the buyer, seller, and boat all reside in the same country, a buyer will check out the boat before submitting a purchase and sales agreement or handing over a deposit. But Mike’s deal worked a bit differently.

“When you’re buying a boat in a foreign country, it’s best to try to do the deal in one step. So you try to get as many details and photos as possible ahead of time, before you get on a plane,” says Roger Johansson, owner of Free State Yachts in Deale, Maryland. He is the broker who closed the deal for Mike and Ann.

Before Mike left Minnesota, he and Ann submitted their written offer and put down a deposit on the boat. “It makes sense, because then everything is secured before the trip, but the deal is pending,” Johansson says. “Probably 90% of my foreign deals are set up this way.”

Making an offer and forking over a deposit may sound like a risky way to buy a boat you haven’t seen. But it’s a common way to do business, and typically it’s safe when a reputable dealer is working the deal. If you don’t like the way the boat handles, or if something is wrong with the boat, you can either renegotiate or walk away.

The survey turned up a few minor issues that needed correcting before Mike could sign on the dotted line. Nonetheless, the repair service at Shelter Bay fixed the problems quickly. “The seller paid for the work and then we closed on the deal. It was very much like doing a transaction in the U.S.,” says Mike.

People looking for boats often miss the deal of a lifetime because they’re afraid to look beyond their nation’s borders. “I think there is a certain amount of fear out there with regard to buying a boat in a developing country. But don’t be afraid to do it. Some people who were interested were afraid to get on a plane and go to Panama. We weren’t, and therefore we benefited from that.”

Was there a tax savings, too? Well, that’s still up in the air. “When we bring the boat back to the United States—if we leave it for 30 days in Florida—we’re going to have to pay the sales tax. We’re certainly considering leaving it in Panama, and that would save us that money,” Mike says.

And the couple estimates they can save as much as 40% on marina fees, too, if they keep Escapade in Panama rather than docking it in Florida. Mike was impressed with Shelter Bay Marina’s facilities and security. “It’s fenced and protected, so it’s a very safe place to dock a valuable yacht,” Mike says. “The chance of theft is like zero. They have no issues at all, and that’s not true of a lot of marinas in the Caribbean.”

Plus, leaving the boat in Panama offers geographic advantages. “Panama is much closer to the cruising grounds we want to spend most of our time in, the southern Caribbean,” Mike says.

Mike and Ann aren’t waiting for retirement to enjoy their new boat. In fact, Mike recently took Escapade on a Caribbean crossing and the whole family went sailing during spring break.

As for where they’ll call home in the coming years, Ann and Mike are taking their time before making a decision. Regardless of where they land, it’s safe to bet that an ocean breeze, fresh seafood, a little dancing, and exotic drinks adorned with paper umbrellas will play a role in Ann and Mike’s future.