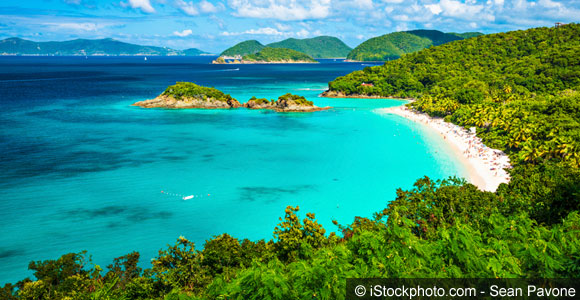 The U.S. Virgin Islands is located in the Caribbean

History: During the 17th century, the archipelago wasdivided into two territorial units, one English and the other Danish. Sugarcane, produced by slave labor, drove the islands’ economy during the 18th and early 19th centuries. In 1917, the U.S. purchased the Danish portion, which had been in economic decline since the abolition of slavery in 1848.

Location: Caribbean; islands between the Caribbean Sea and the North Atlantic Ocean, east of Puerto Rico.

Geography: An important location along the Anegada Passage—a key shipping lane for the Panama Canal. Saint Thomas has one of the best natural deep-water harbors in the Caribbean.

Government: Organized, unincorporated territory of the U.S. with policy relations between the Virgin Islands and the U.S. under the jurisdiction of the Office of Insular Affairs, U.S. Department of the Interior.