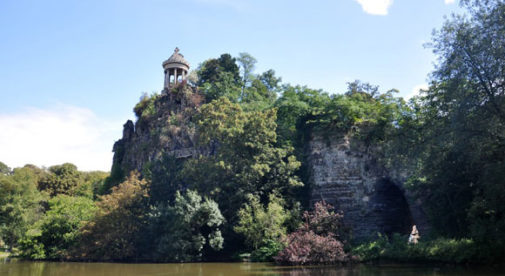 When seeking a calm green space in Paris, most tourists naturally gravitate toward the flawless beauty of the Jardin des Tuileries or Jardin du Luxembourg. But, as lovely as these gardens are, the prevailing message is: “Look, don’t touch.” Even sitting on the grass is usually forbidden.

If you want to relax in a more natural setting, then act like the locals and head to the grassy slopes of the Parc des Buttes-Chaumont, in Paris’s Belleville quarter. Here, amid the laughing children and hand-holding couples, you’ll find massive, slanting trees, the tips of their branches dipping into a small lake; leaf-shaded twisty paths; hidden grottoes; and even a waterfall or two.

This splendid park, Paris’s third-largest, was the brainchild of Baron Haussmann, the legendary 18th-century city administrator responsible for the elegant boulevards and buildings that Paris is famous for today. It’s hard to believe that before the area caught Haussmann’s eye, the park grounds were simply a large bare hill ­that once served as a gypsum quarry and garbage dump. It was so bereft of vegetation that the locals called it chauve (bald) mont (mountain), hence its name, Chaumont.

Now, far from its stark origins, the park is so richly dense with trees and shrubs that when you enter its gates, Paris’s big-city energy suddenly drops away. Were it not for the excellent, panoramic city views offered from the park’s highest peak, you could almost believe you had left Paris altogether.

While much of this park’s fun comes from blindly exploring its many twists, turns, and whimsical features, there are certain highlights you won’t want to miss. Among these is the Temple of Sybil, a neo-Greek-style replica of the famous Roman temple in Tivoli. Set atop a small rocky island, the temple can be accessed by crossing a 207-foot metal suspension bridge that hangs 98 feet above an artificial lake. (Crossing this Gustave Eiffel-designed bridge is an adventure unto itself on windy days!)

As you wander, keep an eye out for the picturesque grottoes and waterfalls on the park’s south side, which were created from the old gypsum quarry. You may also stumble upon the abandoned 19th-century train tracks that run through the park, as well as cement rain shelters designed to look as if they were made from wooden logs.

Before visiting the park, don’t forget to pack a baguette, a hunk of cheese, and maybe a bottle of wine. The park’s slanting hills are a wonderful place to picnic after your explorations.