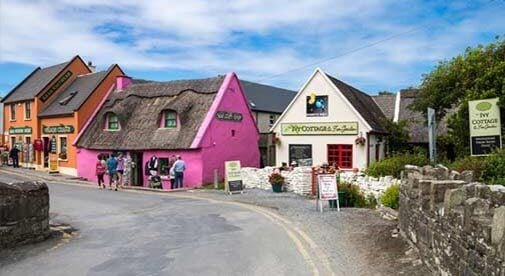 Along the majestic western coastline of Ireland known as the Wild Atlantic Way sits one of its most welcoming and charming villages. Doolin, located in County Clare, consumes visitors with its fabled Irish spirit and space for adventure. It delighted me so much on brief, first visit that rather than skirting past the coastline the second time around, I intentionally detoured west, actively seeking Doolin’s robust music scene, hearty food, and scenery.

Although the town is small, its row of multi-colored shops offers a treasure trove of traditional Irish gifts that I quickly discover I can’t go home without. From hand woven scarves and tweeds to pottery, it’s a taste of this artisan community, and offers that perfect gift to take home with you. More flavor can be found outside of town at The Clare Jam Company where delicious homemade jams, chutneys and mustards provide the perfect toppings for Irish brown soda bread.

Heading south from Doolin toward the Cliffs of Moher, look toward the Atlantic for the 16th century sandstone tower of Doonagore Castle standing majestically over Doolin Point. Although the castle itself is not accessible, a small road will take you close enough for the first of many stunning coastline images.

Whether choosing to drive or go by foot along the coastal walk, the Cliffs of Moher, one of Ireland’s most visited sites (a UNESCO Global Geopark), is a natural masterpiece that will stop you in your tracks. An 11-mile graveled path connects the village of Doolin to the southern village of Liscannor; enjoy views of the Aran Islands, and on a clear day, the southern Blasket Islands in Kerry. Although not a difficult trek, its important to note that the terrain requires jumping streams and has inclines which might prove challenging for the faint of heart.

Equally as breathtaking but a much safer option is the official entrance to the cliffs, about four miles from Doolin. With your car park ticket (from $4 per person), visitors gain access to the shops and the overlook. Formed over 350 million years ago, The Cliffs of Moher tower 702-feet at their highest point, offer heart-stopping glimpses of the Atlantic Ocean. Its also a playground for wildlife most notably the Atlantic Puffin during its nesting season between May and July. A self-guided tour leads to O’Brien’s Tower built in 1835 as an observation platform. Make sure to check weather conditions prior to arrival; fierce winds may close the site.

Before returning to Doolin, drive south toward the seaside town of Liscannor, located on Liscannor Bay. On the way, just off the road’s edge and hardly noticeable, is the shrine of St. Brigid’s well, one of the country’s oldest wells rumored to have healing powers. In a small stone grotto, the running water is surrounded by thousands of photos, rosary beads, and candles left by worshippers. During my visit, a worshiper circled the shrine which was built with stones symbolizing the saint’s character five times, and then sipped from the well. Before leaving, he dropped coins in a pot, his offering for drinking from the well. As with many religious sites in Ireland, be respectful of beliefs and traditions; leave your cameras in your vehicle.

Continue into Liscannor and enjoy a pint at Joseph McHugh’s Pub. Refuel with the day’s fresh catch from local fishermen. It doesn’t take one long in the land of fairies and fables to understand its foundation lies in its musical heritage. Doolin and County Clare, considered by many as the home of traditional Irish music, holds year-round festivals of song and dance. From the Doolin FolkFest in June to September’s month-long Lisdoonvarna Matchmatching Festival, Irish tunes take center stage. However, it’s the nightly  music inside the Doolin pubs that make for the perfect end to the day. Sessions happen at Fitzpatrick’s Bar at Hotel Doolin (try the in-house Dooliner Beer), McDermott’s, Gus O’Connor’s, and my favorite, McGann’s Pub which is open year-round serving hearty Irish beef stew. And if you happen into McGann’s when local favorites Blackie O’Connell (uilleann pipes) and Cyril O’Donoghue (bouzouki) are playing, you’ve hit Irish gold. With this many options, end every day in Doolin with music.

You’ve experienced the green and majestic; now, witness the Burren (meaning rocky), a 97-square-mile ethereal landscape dating back millions of years. Originally a seabed, its limestone covering, as far as the eye can see, allows for little greenery but reveals mostly pavements appearing more like the moon’s surface. A must-experience day trip from Doolin, the Burren region begins in the northern part of County Clare. There are several ways to access it, whether heading east stopping at the Burren Centre for an overview of the area’s history or traveling north toward Ballyvaughan and following a southerly route ending in Burren National Park, each will transport you into what seems like a different world.

I choose the drive from north to south which allows me to stop and explore. To my right and left, I observed a harsh exterior with random sightings of colorful flora and grass rising from between the rocks. Along the way, I visited Allewee Cave, one of Ireland’s oldest, for a tour of the underworld. Continuing south, I recognize the Burren’s most iconic image, Poulnabrone Dolmen, a portal tomb rising high from a limestone plateau dating back thousands of years.

Although the drive is just an hour, I often stopped and got outside in order to truly experience the Burren. Take a walk and listen to the silence. It is genuinely unlike any other place on earth.

At its southern point, the Burren National Park’s information center, located in Corofin, is open seasonal from April to September; an app (The Burren) is available to guide visitors through walks and trails. However, guided walks of the seven trails (easy to difficult) are available through the park service; they are free but must be booked in advance.

Inspired by the Burren? Don’t miss The Burren Perfumery, a family-owned company that creates small-batch organic creams, balms and perfumes influenced by the flora of the region. From lotions to soaps to teas, the only problem is choosing your favorite. My favorite fragrance, Winter Woods, takes me back to the Burren every single time I wear it.

If time permits, take a day trip to the Aran Islands via Doolin2Aran Ferries. Inishmore Island, the largest and most populated, rises from the Atlantic with spectacular cliffs, forts, ruins and churches. Tours are available by bike, pony and trap, or by bus. Spend the day in exploration and at its end, visit the Aran Sweater Market in the village of Kilronan for a timeless Irish product.

Of all the villages in Ireland, Doolin continues to beckon my return with its small-town appeal. Its playground of natural wonders allows exploration while its pubs and people ground me to a place steeped in Irish hospitality.

The 10 Best Things About Ireland