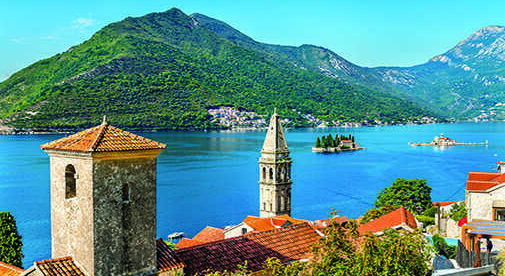 With their home base established in Montenegro, Warren and Julie can explore Europe at will. ©iStock/leonid-andronov

My husband, Warren, and I dared to have a dream: We wanted to travel through Europe as slow roving retired nomads, with our two dogs.

We knew that traveling by plane repeatedly with a dog weighing nearly 30 pounds was just not feasible, so we decided we’d travel by car. I won’t lie. Being Americans, it was somewhat complicated and daunting to figure out how to make it happen. Most of Europe now belongs in the Schengen Zone of 26 countries, which, unfortunately, only allows Americans to remain in the entire area of 26 countries for 90 days every 180 days.

The second challenge for Americans: How do you own and register a car to travel through Europe without having residency in a European country? Non-stop renting of a vehicle limits your freedom, places time constraints, and increases the cost considerably. If you’re looking to travel for a short period of time, say 90 days or less, a car rental is a feasible answer, but we are looking at spending 10 or more years exploring Europe.

We arrived in Europe in January of 2021 with our game plan already established.

We initially arrived in Belgrade, Serbia; due to COVID, it was one of the only countries allowing Americans to enter Europe at the time. We originally rented cars in Belgrade, the first for 45 days, and the next for 90 days. We were able to do some international travel and exploring until we were finally allowed into the country we needed to get to for our automobile.

How can an American citizen buy a car and register it in Europe? The answer was challenging to find. We found three options. The first was to form a corporation in France, which had a lot of bureaucratic red tape, required us to remain in France for up to two months while the paperwork was completed, and would cost us thousands of dollars.

Our second option seemed a bit confusing. The Netherlands had a sort of loophole opportunity, where we would essentially lease the car from a citizen of the Netherlands who would carry the insurance for us.

Now that we had determined how to most easily own and register a car in Europe, we had to find a reputable attorney for the process. We made our initial contact with one in northern Bulgaria via email in August of 2020, but once again, the Coronavirus pandemic delayed our plans. We were ecstatic to finally get to Bulgaria when their border opened in May 2021, but to our surprise, several people warned us against purchasing a used car in Bulgaria (including our new attorney, Dimitar). Bulgaria has a reputation for rebuilding cars, so we heeded the warning and decided to import a car from Germany.

We reached out to the expat communities of Bulgaria and asked for advice. They gave us the name of a reputable company located in Sofia, Cars-Help. We contacted them via email and, to our amazement, they emailed us back in a matter of an hour. They helped us to locate, negotiate, and then inspect our chosen model of car—a Citroen Berlingo. They also transported the vehicle to Bulgaria.

We’re looking to spend 10 or more years in Europe.

We have affectionately nicknamed our car Abby, short for “the Abyss” due to her vast storage capacity. She runs on diesel and gets approximately 45 mpg. She’s also easy to park in the tight European parking spaces. With Cars-Help, the seemingly stressful buying and importing process was made seamless.

Our attorney was fantastic, too, and he guided us from start to finish. The €520 ($570) price he quoted us in August of 2020 was honored in May of 2021. We met with him twice over a two-day period for a total of two hours. His assistant accompanied us to their Motor Vehicle Government office and was there every step of the way. The process took about 90 minutes, including the Bulgarian vehicle inspection. It was impressive and when asked if we would do it again, we respond with a resounding yes!

We are, however, obliged to bring the car back to Bulgaria once a year within a week of its registration anniversary date for what is termed the MOT, an acronym for Ministry of Transport. This is an annual test of vehicle safety, road worthiness aspects, and exhaust emissions. Our insurance on this vehicle along with the annual MOT amount is approximately $400 per year.

Bulgaria is useful for us as it is non- Schengen, and has wonderful sites to explore, from the large capital city of Sofia to the beaches of Varna on the Black Sea. It’s also within reasonable driving distance from one of our favorite countries in the world: Montenegro, where we own our home base.

In 2016, Warren and I bought a 400-year-old small flat in one of the most beautiful countries in Europe, Montenegro. After realizing we could not just choose one country to retire to in the future due to our wanderlust, we knew it was imperative we had at least a home base on the European continent.

We found we could easily obtain residency in this little country of approximately 600,000 people. Currently, residency can be obtained either through the purchase of habitable real estate, or by the formation of a corporation. At this time, we have not obtained residency in Montenegro due to the minimum time requirements of spending 10 months per year there. Since we are choosing to slow travel through Europe, we did not want to limit our time to travel.

Montenegro, however, gives us a non-Schengen location to recharge in. As U.S. citizens, we are allowed to visit this little country for up to 90 days in a 180-day period, twice a year, on a tourist visa. Montenegro offers mountains and the beach all in a day’s drive. You can swim in the Bay as late as November, though the water might be just a little bit chilly. It also boasts the southernmost fjord in Europe. The Old Town of Kotor, dating back to the 5th century BC, looks like a movie set. Quaint little shops, cafés with outdoor terraces, ornate churches, and perfectly preserved buildings.

You can climb the 1,500 steps up the ancient walls of the fortress for breathtaking views of the fjord and Kotor Bay. In the winter, you can visit the towns of Zlabjak and Kolasin for snow skiing. These towns are also great getaways in the spring, summer, and autumn months if you wish to hike and explore the vast trails, zipline across the Tara Canyon, or go on one of the many rafting and kayaking adventures on offer. The cost of living in this near perfect destination is incredibly low. Montenegro uses the Euro as its currency, so there are fluctuations against the U.S. dollar, but the strong currency provides for a fairly stable economy.

Many people ask Warren and I if the process of purchasing real estate in Montenegro is safe, and whether we felt it was difficult. Buying our home was extremely simple and, with the help of our Montenegro attorney, we felt it was extremely safe. You would think that buying a flat in a UNESCO heritage site would be terribly difficult and bureaucratic, but we found the process to be easier than buying real estate in the United States.

After looking at approximately 20 homes along 40 miles of the coast of Montenegro, we decided on a small flat in the very center of the walled city of Kotor. The process was quite like that of the United States. We submitted a written offer through our real estate agent and, after negotiations, we settled on a price.

Cost of living in Montenegro is extremely low.

It was now time to open a bank account in Montenegro. Our real estate agent helped us find the best bank, according to the rates that would be charged for moving U.S. dollars to Euros. At that time, that was CKB Bank, which has a branch in Kotor. We opened two accounts; one was the United States dollar account, and the other was the Euro account. As we had decided on a flat that needed extensive renovations, we moved not only enough money to buy the property and pay the fees, but also enough to cover the required work needed for the remodel. The wire transfer took less than two days.

One thing to note, Montenegro does not issue the standard 10- to 30-year mortgage, so you will need to be prepared to pay for your home in cash. We had to appoint our attorney, Olga, as our Power of Attorney holder, as we had to return to our lives in the United States during the process. She worked her magic and within 30 days, the flat was ours.

We hired a designer to completely recreate the space. He did an excellent job of creating storage from floor to ceiling and a well-appointed kitchen and bathroom. Overall, our experience had its trials and tribulations, but we are thrilled with the end results and would highly recommend people consider choosing Montenegro for their first or second home, or as a home base for European travels.