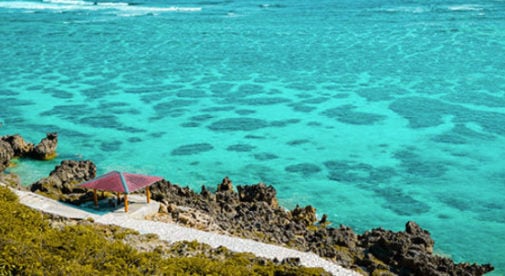 Japan’s islands span a slice of the Pacific Ocean from snowy Hokkaido down to warm Okinawa. ©iStock.com/bee32.

When it came to tropical islands, I always thought of myself as a Caribbean type. Close by… beaches…palm trees…warm…decent plane fares.

That is, till I discovered this gem of an island in the Pacific.

Honestly, I never would have found this gem if it weren’t for a family member moving there. Now, I just got back and I’m already making plans to return.

Okinawa Prefecture is the southernmost of the Japanese archipelago (prefectures are like a U.S. state, but more beholden to the federal government). Japan’s islands cover a distance of 1,900 miles, north to south. Okinawa is 930 miles from Tokyo.

Some 50,000 to 80,000 Americans live in Okinawa. Many are military service members or their dependents. A good number of the island’s expats are civilians or retired military who now call Okinawa their permanent home.

Like the four fishing buddies I met at the beach. They’ve been there since the 1980s and have no intention of leaving. Or the family of seven who moved there with the military, then decided to stay permanently, now making a living teaching English and music.

Pristine beaches are everywhere. Most are secluded and empty—all yours to enjoy. If active sports are more your thing, Okinawa offers great scuba diving and snorkeling, parasailing and paragliding, stand-up paddle boarding, kayaking and canoeing, fishing…and dolphin- and whale-watching.

Cape Manzamo in Onna is easily my favorite. Its “elephant trunk” is nothing short of amazing. Many seascapes in Okinawa boast startling rock formations forged by volcanic lava flows meeting the ocean.

Laidback island life in Okinawa is a welcome escape from pressure to keep up with the Joneses. Most people drive small 10- or 15-year-old, $2,000 cars. Their goal is to get from Point A to Point B, not flaunt a status symbol.

Filling houses with needless stuff isn’t a thing either. The focus is on simple, healthy living, not on possessions.

A sense of quiet respect permeates the island.

4. A foodie’s dream, obesity not included.

Tiny cafés dot the countryside. And delis offer a mind-bending range of delicious Japanese cuisine. Once you’ve eaten real Japanese ramen, you’ll never buy cheap American version again. The flavor is incomparable. While probably not the world’s healthiest food, you could eat it every day and not get sick…unlike the carcinogenic gob that passes as “ramen” in the West.

Naturally, you also have access to a nearly endless array of the daily catch at impressive fish markets, plus tempura, teppanyaki, sushi, sashimi, and more.

5. Vending machines on every block.

Craving a coffee, soda, tea, beer, or just about any other drink? No problem. Stroll down the block or stop along the road, insert coins, and presto—it’s yours. Always nearby, the selection is truly amazing. You’ll see them at parks, playgrounds, and in every neighborhood. They’re far more convenient than a convenience store.

Gone are the days of traditional kimonos. The Japanese now wear typical Western clothing, emphasizing covered arms and legs. But there’s far more to their culture than clothing. It’s wrapped up in their language, food, history, bathing customs, bowing, and more.

Bowing seemed strange to me at first. But I quickly discovered its practical uses.

At the airport, I wasn’t sure if I was at the right gate. I approached two Japanese women. Three words into my first sentence, it was clear they didn’t understand a word of English. They shook their heads and gestured. A simple bow excused me (and them) from this awkward situation.

Daiso, the Japanese version of the dollar store, makes ours look downright cheap and full of low-quality Chinese-made junk.

100 yen stores sell higher-quality items, with a selection that blows ours away. One I visited was a two-story establishment similar to U.S. department stores. I bought items I’d have to pay five times as much for in the States. It certainly helps offset the somewhat higher cost of housing in Japan.

Intrigued? A visit to Okinawa is well worth adding to your bucket list.

An Affordable Long-Stay Tour of Japan by RV