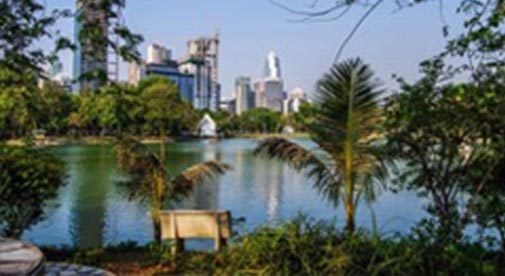 Bangkok is bright and vivid, which is even more rewarding when your sight has been improved. ©International Living/Victoria Harmer.

Mariam Coleman points to Baiyoke Sky Tower in Bangkok, Thailand. “My son took me to dinner there, that’s the tallest building in the city, and the restaurant revolves.” Mariam who, in her own words, is “pushing 80” has been in the city for four weeks and, despite the hazy air, she’s seeing more clearly than she has for years.

“I knew about the cataracts for a couple of years at least, but I couldn’t take the time to recover from the operations while my husband was still alive. Two weeks for each eye meant that we would have had to hire home care assistance 24 hours a day for four weeks and that adds up.” Mariam took care of her husband, who fought Parkinson’s disease for over 10 years.

“It wasn’t the way we had foreseen our retirement,” Mariam says, smiling. “The first few years were great, we had an RV and traveled all over the U.S. Then we bought our beautiful home on the lake, with a small state park behind us. Deer, porcupine, skunks, all kinds of birds would pass through our backyard every day.” Eventually, though, Mariam’s role as caregiver became crucial until she had almost no time to herself. She also ignored some of her own health needs. But when her husband passed away, her doctors told her it was time to get things done, and cataract surgery was at the top of the list.

“My ophthalmologist said my vision was impaired by up to 40%, and that I shouldn’t be driving. This is not a choice where I live.” Cataract surgery is considered a simple procedure with little risk, and her insurance would cover the cost. But she still needed two weeks to recover after each eye, which meant no driving, no doing chores, no cooking.

“I talked to my son about it and he said ‘Mom just come here and get it done, I’ll work out all the details. It’s the holiday you need anyway.’ At first I thought it would be too much, but he assured me that it would be easier this way. And I had never been to see him in the 15 years he has been living in Bangkok. Plus, I could see my grandson, and his wife could help me. It started making a lot of sense.”

Mariam’s son made all of the arrangements. He bought her an open-ended round-trip ticket for $1,400 and made appointments for her at one of Bangkok’s leading hospitals, where Mariam’s insurance was accepted, leaving her only a small co-pay to cover.

“It took a couple of days to get over that long plane ride and the time change (12 hours difference from Mariam’s home in western New York state) before getting the first eye done. I wasn’t nervous about the procedure. After years of dealing with doctors and hospitals with my husband, cataract surgery seemed about as daunting as getting my hair done.”

The surgery required an hour and her whole visit just five. “My daughter-in-law took me back to their condo with me wearing dark, dark glasses because I was warned that everything was going to be very bright at first and I should take it easy. When my son came home from work though I said ‘OK buster, let’s go and see some of this city.’”

It really was like living in a new world.

The real shock after the surgery was the vivid colors. “After I had the first eye done things were unbalanced; my right eye was seeing blazing colors, but the left was still dulled. After both were done it really was like living in a new world.”

Mariam’s home in New York is remote, the nearest store a 20-minute drive, the nearest city over an hour. Bangkok was like nowhere she had ever been. “The food, the language, the smells, the heat! It’s a beautiful mess. After 10 years of being almost a hermit I made them take me everywhere. We went to markets that had vegetables and seafood I didn’t know existed. We went to a luxury mall, we took some canal boat taxis, and I had my first massage ever.”

Breaking down the expenses of an afternoon out with her daughter-in-law Mariam calculates they paid $15 on multiple taxi rides, $5 per person for foot messages, $8 dollars for a lunch of whole steamed fish with herbs and vegetables, and $10 dollars for two glasses of wine in the lobby of an international hotel.

Mariam’s son also took the whole family to Koh Samet island for some sand and sea. “On the island we were pampered; we ate giant prawns and drank fruit shakes. I hadn’t been to the sea in a decade and being there with my grandson Jack was such a joy. I felt so young.”

As the time she allotted for the trip flew by, Mariam postponed returning to New York once, then again, deciding to wait until spring is in full bloom.

In the end the cataract surgery added up to just over $6,000. But Mariam paid less than $300 out of her own pocket. Added to the $1,400 for her ticket and the overall cost of the family’s holiday on Koh Samet, the trip cost less than $3,000. That’s less than what Mariam would have paid for two weeks of home assistance.

Thailand is Renowned for its Excellent Healthcare