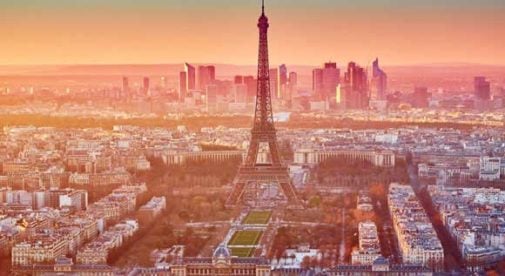 There I was, sipping a lovely white wine from grapes grown within 100 yards of where I stood at a community wine festival.

You might think I’d gone off the beaten track to some remote corner of France where timeless traditions still hold sway… but I was in fact, right bang in the middle of one of Paris’ popular tourist areas—the bohemian quarter of Montmartre.

The fact that Montmartre even had a vineyard surprised me. But Montmartre used to be dotted with them. Clos Montmartre Vineyard is now the only working vineyard in the neighborhood, producing only a small quantity of wine each year.

Historically a village of artists, musicians, writers, and the general misfits of society, Montmartre was the inspirational hunting grounds of Picasso, Van Gogh, and Renoir. You can imagine them drinking locally made wine in dark corner bars, carousing with theatrical sorts from the nearby theaters and cabarets, and generally spending more money than they earned as artists.

Today, money is still being spent, mostly by the throngs of tourists that visit Montmartre each day. It isn’t somewhere you’d expect to find a “community event” let alone any quiet corners to really re-live and experience fin de siecle Paris.

And yet, at the annual Vendanges  de Montmartre festival, I felt suddenly transported back in time, to when Montmartre was covered in vineyards and windmills.

In between sips of wine, I got into conversation with Parisian local Jean-Michel, who loves coming to Montmartre each weekend.

“It is still possible to experience a Montmartre that is very romantic, like the old days,” he said to me while his glass-free hand gestured to the surroundings. “Just don’t follow the main boulevard where the crowds are. Just go, and get lost.”

Taking his advice, I put down my emptied wine glass, headed to the nearest small alleyway, and got lost.

The average visitor arrives in  Montmartre and climbs straight up to the Basilica de Sacre-Coeur or Place du Tertre. Entrance into the cemetery is free, and you will find a complimentary map. I chose to take my time, and strolled through this quiet and peaceful part of the neighborhood admiring the old and ancient tombstones.

I then paid homage to the theatrical side of Montmartre not at the Moulin Rouge, but by visiting the oldest can-can dance theater in Paris—the Elysees Montmartre Theatre. Draped with vegetation, the derelict building sits in the shadow of the iconic red windmill that is the Moulin Rouge.

For some reason or other, I remembered watching the movie Amelie, and found myself in the café she worked at in the film. Les Deux Moulins is a lovely little bistro on Rue Lepic and the perfect spot to engage in one of the favorite pass-times of the French: People-watching. I parked myself at a sidewalk table and watched, as the activities of Montmartre played out in front of me.

Feeling peckish, I followed the directions given to me by my wine tasting friend  and found myself outside the doors of Le Grenier à Pain, whose baguettes won Paris’ best baguette in 2010. However, it was something sweet that I was after, and the lusciously red raspberry tart for $1.13 soon stole my heart.

As the sun made a slow descent towards the horizon, it was time for me to re-join the crowds and follow the cobblestones up to the Sacre-Coeur. But before I reached  my end point, I visited the less appreciated Church of St Pierre, one of the oldest churches in Paris that showcase the area’s Roman origins. The exact era in which the church was erected is unknown, but it was rebuilt by Louis VI and his wife Adélaïde de Savoie in the 12th century, which makes the nearby but more famous Sacre-Coeur seem young in comparison.

Alas it isn’t always possible to avoid the hordes, but watching the sunset on top of Montmartre in front of the Sacre-Coeur is popular for a reason. Montmartre is a place completely in the public eye, but look deeper and you’ll find things about the area that other people have missed. Such is the joy of discovery.