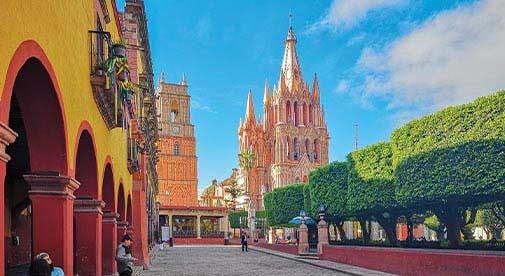 While attending International Living conferences over the years, it was always fun to sit in on Warren Hardy’s entertaining Spanish mini lessons. After moving to San Miguel de Allende, Mexico, I was excited to be to be able to enroll in classes at the Warren Hardy Spanish school in person. My first class was in the summer of 2018. In March 2019 I completed their final Level 4 class.

Having tried other Spanish programs, I quickly appreciated Warren’s approach. His teaching system is designed for how older adults learn. The initial class teaches “Power Verbs”—the most commonly used verbs. From the beginning, Warren also taught us about the Hispanic culture, so we could better communicate. (You can check out Warren’s online classes for International Living readers at IntLiving. com/SpeakSpanish)

After that first class I was able to speak with locals, albeit at a basic level. But my goal was always to keep working and progressing until I could comfortably participate in an active conversation.

From Day 1 we could ask questions in English during class. What a relief! That significantly reduced my stress while learning. For me, most of the classes were fun. Three hours flew by quickly. Each student is paired with a partner of a similar level. Given my past studies, basic verbs came back quickly. I changed partners three times during that first verb class, until paired with a partner of equal level. Warren checks on new students regularly, in case a partner change would improve their rate of learning.

Warren developed an extremely effective flashcard approach that’s used for class exercises. He explains that our over-60 brains best absorb new knowledge by repetition. With our partners, we’d zip through the verb flashcards, prompting one another as we took turns conjugating verbs, learning through repetition. Then we’d shift to the game cards to practice translating complete sentences. Patricia— our patient teacher—and her assistants circulated during the exercises. They’d correct our pronunciation and answer questions. To this day I use the verb and game cards to practice.

After the Level 1 and 2 verb classes, students move to a communication skills class. There are several of these classes, and they were my favorites! Rocio—an absolute delight—teaches these classes. She’s a creative teacher who’s also entertaining. The lessons are primarily in Spanish with a focus on listening and talking. We were given simple topics to write about then translate into Spanish. At the next class we’d share our stories, then answer students’ questions. No more than 10 people are allowed per class, so everyone can participate. After the first week, Rocio began gently pulling our cheat sheets from us. That was intimidating, but the group was always supportive.

Some students take the Level 1 Power Verbs class at the school, then shift to the online versions of subsequent classes. Students rave about the online classes. It’s a great option for those who don’t want to be in San Miguel. Some people take the entire program online; you can do so from anywhere in the world.

Living in San Miguel, I wanted to learn at the school. I prefer the person-to-person teaching approach. Many of the other students I met were from the U.S. or Canada. They rented a place in San Miguel for a few months then took several classes at the Hardy school. They were able to explore this spectacular town while learning Spanish.

After my first class I was able to speak with locals.

So, having finished the entire Hardy program, what’s next? Warren explained that you don’t become fluent until you live in a place where you speak Spanish daily for six months. Due to COVID-19, I can’t jump right into an immersion program, and I’m cutting down on close contact out and about, which also minimizes my chances to speak. So, I’m working on improving my vocabulary, as well as listening and speaking skills, by watching Spanish-language news on the TV (no subtitles) and Netflix movies in Spanish (with subtitles).

Every day I read articles in Spanish, looking up unfamiliar words. I’ve also enrolled in an online class through the Coffee Break Spanish Academy. They offer a series of podcasts, all in Spanish.

It’s been almost two years since my first Warren Hardy Spanish class. I’m thrilled to have completed the series! I can now hold my own in a Spanish conversation and understand much of what’s said. But, learning a new language is a long-term journey. It’s a bit more challenging when you start in your 60s. There’s no point in being hard on yourself. It takes time and practice. But with the solid foundation Warren’s program has provided, I’m on my way to becoming fluent. There’s another silver lining… Learning a new language has helped improve my memory!

Editor’s Note: What’s the #1 Thing Every Expat Says They Wish They’d Done Before Going to Latin America? “I wish I’d learned a bit of Spanish…

Warren Hardy Spanish: Webtutor is delivered to you online, you can enjoy the entire experience in your own home, office, or even on the road… You can access it from your desktop, laptop, tablet, phone…any mobile device any time and any place you want.

Just click here and you’ll be taking that first, critical step to a better, more rewarding experience in any Spanish-speaking situation.