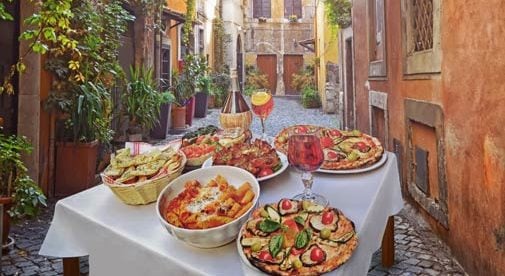 One of the great things about Italian cuisine is that it’s never boring. Each region, even small swaths within regions, have their distinct dishes and food specialties, so traveling around gives you new things to sample.

My region of Basilicata has its own ingrained culinary delights, many stemming from the region’s humble roots, the “cucina povera” that led to creativity in the kitchen using simple ingredients to create delectable dishes. The products from here are genuino, for the most part made like they’ve been for centuries. It’s a great region for vegetarians, because many dishes utilize legumes and the season’s vegetables, but carnivores won’t go hungry, either. Here are a selection of some authentic Italian culinary delights to savor in Basilicata.

A cow’s milk cheese made from the mountain-grazing podolico breed of cattle, caciocavallo podolico from Basilicata is one of Italy’s most prized (and priciest) cheeses. Bearing aromas and flavors of the forest herbs and nuts they graze on, this cheese isn’t used in cooking but is savored. It’s especially delicious when drizzled with local chestnut honey. But my favorite way to enjoy it is at the local festivals when the saddlebag-shaped cheese is suspended over hot coals and the melted creaminess is slathered on toasted bruschetta. Heaven on bread.

The pasta here is made without eggs, and the preferred shape is cavatelli. Hand-shaped by dragging little pasta nubs across the pastry board with three fingers, it retains little pockets that hold the savory sauces. Whether it’s an everyday tomato ragu, a vegetable sauce with chickpeas, or with cooked rapini greens, the shape holds up well to the vast variety of toppings. Orecchiette (little ears) and wider, flatter strascinati (literally, “dragged”) are also popular pasta shapes here.

Found only in Basilicata, peperoni cruschi are long, thin sweet peppers that are dried in the sun then fried in olive oil, they’re eaten whole or crumbled on top of cavatelli pasta. They are often combined with mollica di pane (course bread crumbs) that are seasoned and fried in olive oil, the combination sprinkled over pasta, a poor-man’s cheese substitute. But I warn you, peperoni cruschi are very addictive.

It is more than its mere definition as “sausage” would imply, because Lucánica pre-dates the Roman period, and is still made pretty much the same way it was back when the area’s ancient Lucani people perfected it. Cicero and Orazio both waxed nostalgic about the porky treat, which comes as a sweet or spicy sausage, and fresh or cured versions. Real lucanica is made from selected pieces of pork and fat, both of which are cut by hand into small cubes (not ground), spiced with salt, pepper, ground peperone dolce (from those peperoni cruschi), and wild fennel seeds. The spicy version adds piccante chile powder to the mix. Either way, it’s moist and delicious, and is used in pasta sauce, simmered in wine, or grilled.

Yes, horse meat is a thing in southern Italy and in Emilia-Romagna, but in towns around Matera, like Bernalda, and just across the border in Puglia, it is a passion, especially when enjoyed in a “braceria”. Specialized butchers raise and sell the meat in their shops, which turn into wood-fired grills in the evening. You select the meat you want and they cook it to perfection while you wait. Some offer a smattering of side dishes, along with local red wine to accompany the grilled meat.

An ingenious dish, it means “salt water” but is a way of using stale bread, it has as many recipes as there are cooks. Generally, a light broth is made of onions or other vegetables, along with peperoni cruschi or tomatoes and water. Eggs are poached in the broth and it’s all spooned over the bread in bowls.

There are lots of sheep around Basilicata, so you can bet the lamb dishes are truly delectable. Whether it’s simply grilled or baked with wine and herbs, or topped with mollica di pane, we enjoy its sweet-and-savory flavor immensely. Mutton is used to make a stew called cutturiedde.

Likewise, those grazing sheep provide milk that is used to make swoon-worthy pecorino cheese which can be purchased from a local producer. Varieties made in Filiano and Moliterno (called Canestrato) are both aged in grottoes, and are especially noteworthy and prized in other parts of Italy, as well.

An unusual dish found only in this part of Italy, it uses ráfano (horseradish) which is referred to as “poor man’s truffle.” Rafanata is basically a frittata of eggs, potatoes or stale bread, grated horseradish, and pecorino cheese, though some cooks add crumbled sausage or various herbs. It’s usually served around Carnevale time for a spicy, warming kick during the festivities.

Forget that salt less, mealy bread of central Italy, Basilicata enjoys heavenly loaves with crunchy crusts and soft interiors. It’s made from semola flour (the stuff used for pasta) and often baked in wood-fired ovens, this is what bread was meant to be. The contorted-shaped Matera bread has special protected (IGP) status and Slow Food recognition, and is considered by many to be the best bread in Italy.