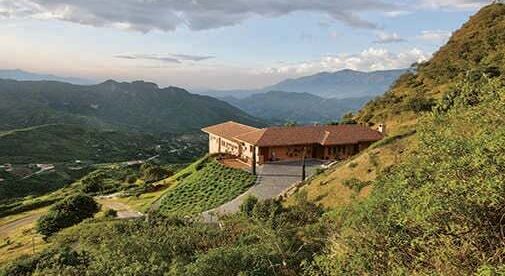 Dek and Val’s home (above) gives them privacy and stunning views of the Vilcabamba valley. © Valerie Klein

“Just getting the foreman to use a spirit level was a huge struggle,” says New Yorker, Dek Tillet, about building a dream home on an Ecuador mountainside. But what a house it is! The master bedroom has floor-to-ceiling windows that literally hang out over the valley, and the infinity pool seems to flow right over the edge of the mountain. A state-of-the-art chef’s kitchen features a central island large enough to seat 12 people.

In early 2016, Dek and Val Klein found and fell in love with a 32-acre plot of land outside of the Ecuadorian highland village of Vilcabamba, in the predominantly indigenous neighborhood of Mollepamba. They immediately saw potential for building their dream home at the top of the mountain—something that Dek had envisioned for 40 years but couldn’t afford to do in the States.

The couple had arrived in Ecuador in 2008, looking for an overseas adventure. Val had lived in Costa Rica for a couple of years and become enamored with Latin American culture, and Dek was ready to leave the stresses of life on the East Coast and reinvent himself in a new country.

“We came on a trip to Ecuador after a friend recommended that we check it out,” Val says: “We got off the plane and almost immediately fell in love with the people here. Three months later we made the move, and 14 years on, we’re still here!”

Though the couple first settled in the handsome colonial city of Cuenca, over the years, they explored the surrounding cities and countryside, finding much to enjoy. They were already familiar with the small town of Vilcabamba, located about five hours’ drive south of Cuenca, having made several short trips down there over the years. “What really attracted us to Vilcabamba,” Dek says, “was the purity of the air and the temperate, year-round climate (temperatures are in the 70s and 80s year round). The natural beauty is also spectacular.”

The small town of about 5,000 residents has become a popular destination for North American and European expats seeking a quieter, health-driven lifestyle in a near-perfect climate. The arrival of overseas residents has given rise to a surprising number of high-quality, international restaurants, as well as a weekly market selling fresh, organic produce, and an excellent French bakery.

Vilcabamba lies at 5,000 feet above sea level, with a semi-tropical ecosystem good for growing coffee and almost any kind of fruits and vegetables. It also lies just 40 minutes from Podocarpus National Park, a protected area of more than 560 square miles boasting over 600 bird species and some fantastic hiking opportunities.

Simply settling down to enjoy life in a new home wasn’t the option Val and Dek settled for though. They also saw a business opportunity to create several lots on a subdivision on the lower half of the property. “The land lent itself perfectly to planning a small community of homes on fairly sizable lots, providing everybody with a sense of privacy and enough distance from their immediate neighbors, while enjoying shared infrastructure and security,” Val says. “We also imagined that people would take some comfort that the owners of the subdivision were so close by.”

Most people would have looked at that land—sprawling over a steep, grassy mountainside—and thought it impossible to build a house right at the top, but Val and Dek were not deterred by those challenges. After six weeks of hard work, the three-quarter-mile farm road was widened and improved to the point of being able to handle heavy trucks, and work began on the site for the house.

Working with an architect from the city of Loja, the couple drew up plans for their home, which would include a horseshoe-shaped brick structure embracing an infinity pool, jacuzzi, and interior grassy courtyard, all overlooking the most spectacular views in the Vilcabamba valley, 1,000 feet below.

When construction began, Dek and Val rented a small house close by and were fully involved in all aspects of the build. A team of workers built and moved into a wooden structure on the property, to provide 24/7 labor to the project, while Dek himself made hundreds of trips back and forth into town to transport bricks in his pick-up truck.

The natural beauty in Vilcabamba is spectacular.

It wasn’t all smooth sailing, and there were many headaches and heartbreaks along the way as they struggled to convey their visions and expectations to the construction crew. But persistence paid off, and at the end of 2017 the house was ready for Val and Dek to move into.

“Ecuador is quite a bit more developed than people might think,” says Dek. “You can source pretty much anything you need these days, and there is plenty of talent when it comes to craftsmanship. We were able to achieve our dream home in Vilcabamba without any background in new construction. So, if you come to Ecuador with a vision, and a good amount of patience, you can accomplish something that would be almost impossible to do in the States.”

The couple have now been living in the house for four-and-a-half years, and although there are always small projects to keep them busy, they finally feel that they have created their dream home.

“There is a real sense of comfort living in a place that we feel so connected to, and that has our imprint on it in every aspect.” Val says. “We feel completely part of the mountain up here.” The four lots in the subdivision—each covering around two-and-a-half to three acres—have now been sold, the owners representing a diverse range of nationalities, from Swiss to Israeli to American.

Despite having some new neighbors at the bottom of the hillside, Val and Dek’s privacy up at the house is still unparalleled. “The only noises we have to deal with are the birds,” Dek says “They wake us up in the morning, and we hear the owls as we go to bed at night!”

Val and Dek spend much of their time overseeing ongoing projects on the property, such as putting in trails on the hillside, making improvements to the steep access road, and tending to the hundreds of beautiful trees and plants that they have landscaped around the house.

They also make frequent trips into Vilcabamba to walk along the river trails with their little rescue dog, Roxy, and enjoy eating at the many excellent restaurants around the town plaza.

With their dream house achieved, the couple are now contemplating the future and deciding whether to embark on another new adventure, perhaps in Europe or the States, or to stay put in their little corner of paradise. Whatever the future holds, living in Ecuador has been quite the ride.

“And we’re still married after all this!” quips Val.

THE VALLEY OF LONGEVITY…OR IS IT? 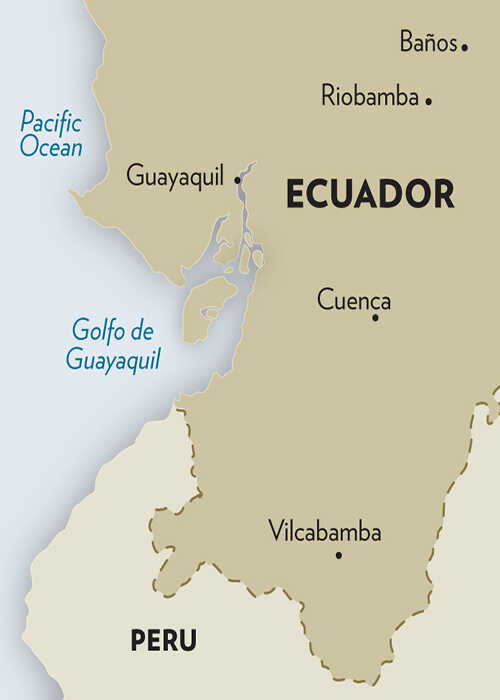 When the trials and tribulations of ruling became too much to bear, Inca royalty would retreat to “the Sacred Valley.” Here they could relax, take counsel, and recharge. Today the Sacred Valley lies in Vilcabamba, a small town nestled in the heart of modern-day Ecuador. However, it now goes by a different nickname; “the Valley of Longevity.” Vilcabamba remained largely secluded until the 1970s, before its potential as a backpacker’s dream became apparent. It was also in the ’70s that reports began to emerge from the valley; stories of multiple centenarians still living life to its fullest. Some people living upward of 120 years old, with one resident apparently making it to an incredible 135 years old!

These incredible tales attracted the intrigue of U.S researchers, who eventually found these claims to be largely exaggerated, unsurprisingly. However, it’s undeniable that there is something to Vilcabamba. The older generation are thriving, continuing to live in a state of happiness and vitality rarely seen in the U.S. Many attribute this to the low-fat, unprocessed diet, the fresh, clean water sources in the area, and a comfortable, moderate climate year-round. Whatever it is, it’s no surprise to see that Vilcabamba has emerged as a popular destination amongst expats. Life in the Valley of Longevity offers a slate of healthy living few places in the world can hope to rival.

Editor’s Note: As Val and Dek have found, the town of Vilacabamba offers a temperate climate and a close expat community, as well as good food at low costs. You too can enjoy a slower pace of life in beautiful surroundings. Whether you prefer life in the country or convenient city living, Ecuador is one of the most affordable places in the world to live or retire. In Escape to Ecuador: Everything You Need to Know to Retire Better, Invest Well, and Enjoy the Good Life For Less we show you how you can enjoy your perfect retirement in Ecuador. Get your copy here.