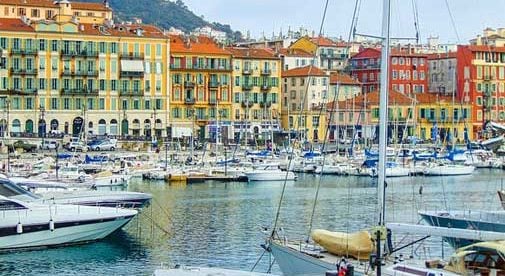 Nice, France is a place often considered synonymous with dazzling wealth and a lavish, champagne-soaked lifestyle—and there’s good reason for this. From the 19th century until about World War II, this was the legendary winter playground of well-to do expats. The likes of Hemingway, Picasso, and Scott Fitzgerald cavorted here during the roaring ‘20s. And it’s only about 30 minutes from the high-stakes gambling dens of Monte Carlo, made famous in James Bond films.

But despite its glamorous history and prime location on the French Riviera—Nice is an unexpectedly accessible and affordable town. In fact, I saw nearly as many young couples and families as retirees.

Ironically, you’ll probably get the best value out of Nice by following in the footsteps of those well-heeled expats of old and wintering there. You can pleasantly expect plenty of bright blue skies, glorious sunshine, temperatures in the low 50sF—and rents that can be half the cost of summer rates. Realistically you can winter in Nice for as little as $3,200 a month.

If you’re going to live in Nice for only a few months, it makes sense to live in the central parts of the city to make the most of your time. Central Nice neighborhoods are all close to the beach and offer a variety of shops, restaurants, cafés, museums, and movie theaters. It’s also easy (and cheap) to get around in central Nice—as the city is highly walkable and has an extensive tramway and bus system that only costs $11.20 for 10 tickets.

Naturally, being close to the beach and most major activities has its price—but it’s not nearly as high as you might think. You can rent a small furnished apartment in a central location—often with all utilities included—for anywhere between $720 and $1,400 a month.

Once you’ve taken care of rent, most other details are gravy. Restaurant prices run the gamut, from swish five-star affairs to no-frills spots with great soul-filling traditional foods. During my visit, I had a delicious lunch at Chez René Socca, dining on socca (chickpea pancake), and fried zucchini beignets, with a glass of white wine. The total came to about $9.

In other places, a large Niçoise salad (native to Nice) costs about $12 and aubergine farcie (eggplant stuffed with chopped meat and garlic), another local specialty, costs about $8. If you’re in the mood for a heartier meal, mid-range restaurants offer three-course set menus for anywhere from $20 to $45. (Try the romantic Côté Marais, where you can get a first-rate, three-course dinner for just $37—amazing value.)

Of course, by having an apartment in Nice, you’ll save plenty by preparing your own meals. “My husband and I probably spend more than the average person on groceries, as we both love to cook…perhaps $168 per week,” says Delorys Welch-Tyson, a U.S. writer and painter who has lived in Nice full-time since 1998. You may be justifiably tempted to shop at the legendary Cours Saleya—a jam-packed outdoor market offering a mouth-watering selection of fruits… vegetables…meats…cheeses…and other products. But, Delorys and other locals say that prices are inflated at this lovely but tourist-infused market. Costs are far more reasonable at the sprawling, mostly French Marché de la Libération (Liberation Market), only a few tram stops from Old Town.

Inexpensive Nice offers much better value than Paris without foregoing any of the glamour—making wintering on the French Riviera surprisingly affordable.