Women in red saris return from morning prayers carrying plates of flowers and tikka powder. I weave past them and dodge rickshaws on the narrow streets. A young man with a bicycle packed with pomegranates makes his way through the crowd, loudly proclaiming he has the best prices. Then the sun hits the golden roof of a temple, drawing my gaze to a flock of pigeons. It’s another day in Kathmandu.

The gateway to the Himalayas and the capital of Nepal, Kathmandu lies in a valley packed with art and treasures. Buddhism and Hinduism have coexisted here for centuries, even merging in some areas. Historically a strategic point on the trade route from India to China, it’s still a city of palaces, temples, and tucked-away streets where little adventures await.

I have lived here since 2012, but for most travelers, Kathmandu is a stop en route to a trek or mountain climb. But the city is worth much more. Here’s my guide to a weekend in “the City of Temples.”

Friday: A Monkey Temple and the Garden of Dreams

You need a hotel, of course. You’ll find most accommodation in the Thamel district. A taxi from the airport shouldn’t cost more than 1,000 rupees ($9.05). In Thamel, you can find countless hotels in all price ranges, restaurants that serve you food from all around the world, and hundreds of shops that sell souvenirs, trekking gear, and everything a tourist might need. Since 2017, cars and motorbikes are not allowed to drive through Thamel’s narrow roads—a huge improvement.

I like the Hotel Shanker, right outside Thamel on Lazimpath. Once a palace of the Nepalese royal family, it became a hotel in 1964—the first 4-star hotel in Kathmandu—and it costs just $68 a night. Take a walk in the beautiful garden by the pool and enjoy the fragrant jasmine flowers.

After settling in, it’s time to eat. There are plenty of small places in Thamel where you can have a good meal, but my favorite restaurant is Fusion Himalaya, on Paknajol. You have to try the vegetable momos; they are the best. Momos are the Nepali version of dumplings, but with specific spices and a very special sauce—a must-eat in Nepal. This is also a good place for dal bhat—rice with lentil soup, vegetable curry, and a spicy sauce.

Once you’re restored, it’s time to explore the rest of the Old Town. The oldest signs of settlement in the Kathmandu valley are from the Stone Age, but the city was founded in the 12th century. Walk down Paknajol Marg into the oldest part of town. The farther you delve, the narrower the streets become. After a while, you arrive at Ason Chowk, a marketplace where all kinds of food are sold. You’ll know you’re close when you smell dried fish, turmeric pow-der, and incense from the temple. Expect to see a sacred cow minding its own business in the market, and devotees ringing bells in front of the temples.

When you’ve have enough of Ason Chowk’s bustle, head toward Indra Chowk. Here you pass through the area of the copper sellers before reaching a small market that specializes in necklaces made of colorful, small pearls. The shops are no larger than 20 square feet, and women in traditional red saris and kurthas—knee-long dresses combined with puffy trousers—push each other through the narrow alleyways, while vendors cry out that they have the best offers. Stop at any of the tiny shops to buy a necklace or two. Depending on the material and size, they cost between 150 and 1,000 rupees ($1.35 to $9.05). Don’t forget to bargain, though.

Continue past the ancient Hindu temples to Durbar Square. For a fee of 1,000 rupees ($9.05), you can explore the palaces that once hosted the kings of Nepal. Many of the more than 50 temples and pagodas were damaged in the 2015 earthquake, but the square is still worth a visit.

You can also visit the house of the Kumari, the living goddess, which is located at the edge of the square. The Kumari is a young girl who is worshipped as the incarnation of the goddess Taleju. Once she becomes a teenager, a new Kumari is chosen. The building is covered in wood carvings of gods, animals, and symbols, and the windows are especially breathtaking with all their ornamentations. Sometimes in the afternoon you can even get a glimpse of the girl goddess in the window.

From Durbar Square, you can slowly find your way back through the narrow streets of the old town toward Thamel, picking up a snack of samosa or sel roti (a circular fried bread made from rice flour) for 30 to 50 rupees (28 cents to 46 cents).

Back in Thamel, take a small break from the crowded streets in the Garden of Dreams. It’s a walled compound that was once a royal leisure garden. A Rana prince created this garden for himself after winning a considerable amount of money at a card game. After decades of neglect and decay, the garden was restored 10 years ago, and it’s now the most beautiful public park in Kathmandu. For a fee of 200 rupees ($1.80), you can lie on the grass, observe the squirrels running around, and listen to the water bubbling from the fountains.

In the afternoon, take a taxi (250 rupees, about $2.25) from Thamel to Swayambunath. Once there, you’ll under-stand why it is called the monkey temple—it is home to thousands of monkeys. The best way to approach it is from the bottom entrance, climbing the 365 stairs. To avoid the climb, tell your driver to drop you at the upper entrance. Enter the temple for a fee of 200 rupees ($1.80).

The main attraction of the temple complex of Swayambunath is the stupa (a mound-like structure that holds relics) with the golden cover overlooking the city. From here you also have an excellent view over Kathmandu. Circle the stupa clockwise as is customary and light butter lamps—traditional Tibetan candles—to make your experience extra special.

You can walk back from Swayambunath toward Thamel, through the back streets, with the last afternoon light. It takes around half an hour. Try the Yeti Restaurant, where you can get Nepalese and Tibetan specialties. I absolutely love the meat momos and pakodas, fried balls of vegetables, cheese, or onions. Also worth a try is the Sherpa beer, brewed from millet, served hot, and enjoyed through a metal straw. (A hearty meal for two will cost around 1,500 rupees, about $13.80.) 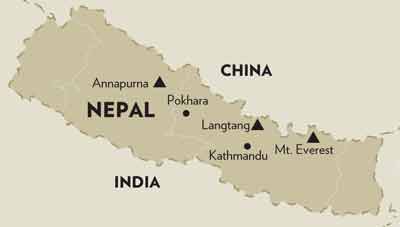 Start your Saturday with a breakfast at the Farmers’ Market at Le Sherpa. To better enjoy Kathmandu life, you can walk there in about 20 minutes from Thamel up Lazimpath road. At the market you can find all kinds of local fresh foods of very high quality. I recommend a delicious baguette, with some local yak cheese and tomatoes to go with it.

It’s time to explore farther out of the city. Take a taxi and head out to Patan, in the south of Kathmandu. Before King Prithivi united the many different kingdoms in Kathmandu Valley, Patan had its own royal family and thus its own Durbar Square. This King’s Square suffered much less in the 2015 earthquake, and you can still see many of the ancient structures.

A museum also gives insights into the rich Nepali culture and history. For 1,000 rupees ($9.05), you can visit both.

Before leaving the south of Kathmandu, you should pay a visit to Karma Coffee, a coffee shop that sells all kinds of sustainably produced local products from within Nepal. You can get beautiful coffee mugs, chopping boards made from mango wood, coffee soap, and specialty teas here—and, of course, coffee beans from different areas of Nepal. The best coffee in Kathmandu and souvenir shopping too.

The most important Hindu pilgrimage site in Nepal is Pashupatinath, and it’s the next stop on your tour. This huge fifth-century temple complex sits along the bank of the Bagmati River, where devotees from all over the country and even India come to pray and worship. It is around 30 minutes by taxi from Karma Coffee. Along the shore you’ll see the cremation sites for the deceased. The Bagmati River leads into the sacred Ganges and is therefore a desirable place for devout Hindus to be cremated. For first-time visitors, this can be quite an intense experience, as you will see the bodies being readied for cremation.

When you cross the bridge and make your way up the wide stair-way, you will pass by many sadhus—holy men who paint their faces with clay and have long dreadlocks. You can take their picture, but they will want a small donation in return. You end the day in Bouddhanath, one of the biggest stupas in the world. This important Buddhist pilgrimage site is surrounded by many small buildings and shops that are home to Tibetan refugees, creating a memorable atmosphere. As you get there shortly before sunset, you witness the most fascinating time of the day at the stupa: All the monks and nuns from the surrounding monasteries come out to do their seven daily laps clockwise around the edifice. Many butter lamps are lighted, and the air is full of mumbled prayers and the smell of incense. The mantra om manhe padme hum adds a low-key soundtrack to the scene. Join the crowd and make your way around the structure a couple of times. Then choose one of the restaurants with a rooftop terrace for a relaxed dinner under the all-seeing eyes of Buddha.

On Sunday, get out of the busy city and head to Chandragiri Hills, in the southwest of Kathmandu Valley. Take a taxi to Godam, where you catch a cable car that takes you up the hill in 10 minutes. A one-way ticket costs 1,300 rupees ($11.77), and a round-trip ticket is 2,200 rupees ($19.90). From the top—8,268 feet above sea level—enjoy an incredible view of the Kathmandu valley and the surrounding mountain ranges. On a very clear day, you can see the peaks of the Annapurnas, as well as that of Everest.

On a clear day you can see the peak of Everest

Visit the ancient Bhaleshwor Temple and take a short hike to explore the beautiful hills before stopping for a lunch break on the crest of the hill. From there you can either take the cable car back down or walk the distance in around three hours.

After you return to the city, head to Pauline’s Garden for dinner. Try the tender buffalo choila, a typical Newari dish, for 1,000 rupees ($9.05). You can also just order a selection of typical snacks, like pork or paneer chili for 300 rupees ($2.71), a plate to share accompanied by an ice-cold local Gorkha beer. Sitting under the old jasmine and guava trees, you can look back at your weekend full of adventure and plan your next steps in Nepal.