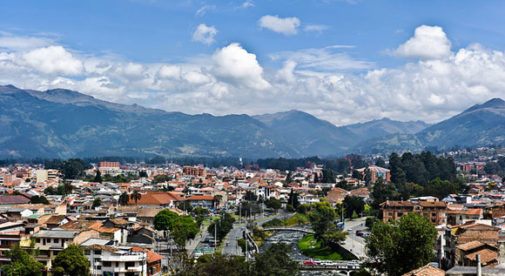 Cuenca, Ecuador has caught the eye of many retirees. Thanks to coverage by outlets like NBC, Forbes, and USA Today, the city is gaining more international attention. And here at International Living, Cuenca gets frequent exposure due to our belief that it’s one of the world’s best destinations for living abroad.

Of course no one place is perfect for everyone, but Ecuador’s third-largest city just might be right for you. Take a look at the following attributes and see if Cuenca checks your boxes.

One of the first things most folks think of when scouting out retirement destinations is nice weather. The average person wants to relax after decades of work, not shovel snow or tinker with malfunctioning air conditioners. For those who are looking for a nice even-keeled temperature every day of the year, Cuenca delivers.

Even though Cuenca sits just slightly south of the equator, its location at 8,300 feet above sea level makes for a nice moderate climate. Temperatures average in the high 60s F year-round. There are no severe seasonal swings either, though May through September tend to see less rain than the other months of the year.

Nice weather is great, but it sure doesn’t hurt to have beautiful surroundings. Again, Cuenca comes through nicely in this regard. The city sits in a basin (incidentally, the word cuenca means basin in Spanish) surrounded by the majestic peaks of the Andes mountains. Not only do the mountains provide a lovely backdrop, but they also contribute four tumbling rivers which make their way through the city.

If the natural setting isn’t enough, just head to Cuenca’s original historic district and feast your eyes upon the centuries-old architectural wonders there. From blue-domed cathedrals to granite-block hotels, you’ll not soon tire of the sights in Old Town.

Because Cuenca is already so popular among expats, you’ll have a built-in social and safety network. Having people around who have already “been there, done that” can save you a lot of time in navigating your way around a new city and country. Nearly everything you might want to know about your new home can be answered by someone already living there. And chances are good that you’ll find new friends who share your love of U.S. sports or country line dancing.

4. There’s Always Something To Do

With a population of nearly half a million, Cuenca has a lot of people to keep entertained. Luckily, it also has a lot of people to provide that entertainment. The municipal symphony often performs free of charge, as do many bands who play in public parks on weekends. There’s also lots of ticketed musical and theatrical performances that will cost you less than $10.

On top of this, there are movie theaters with first-run shows that play in English, writers’ groups, card clubs, cooking classes, and much more. It would be nearly impossible not to find something to keep you occupied in Cuenca.

A big aspect of any perfect retirement haven is its affordability. Luckily, Cuenca is one of the world’s most affordable cities.

Two-bedroom condos in new secure buildings average around $600 per month, though if you spend a little time looking you can find even better deals. Most expats report spending less than $100 on utilities including internet, electric, gas, and water. Great deals on fruits and vegetables can be found at the local mercados (think 15 bananas for a dollar) and even eating out is about half the cost of North American prices.

Typically, a couple can live quite comfortably on $2,200 per month, though a larger budget will afford more luxuries.

Two Reasons Why Cuenca May Not be Right For You

Despite all of Cuenca’s appeal, it’s not for everyone. In fact, there are two main reasons why expats decide against living in this colonial city, and you too should take them into consideration before making a decision to move there.

As mentioned earlier, Cuenca’s seat high in the Andes cools the equatorial air down nicely. However, not everyone adapts well to life at high altitude. Some folks find that they are more easily fatigued or even find difficulty in taking a deep breath. While these symptoms typically go away within a few weeks of arrival, for some they do not.

Additionally, there are certain medical conditions that can cause dangerous problems if the patient spends prolonged periods far above sea level.

While some folks love city life and all that comes with it, others are more at home in a less populated environment. Because of its size, Cuenca comes with great amenities including modern healthcare, a huge array of dining options, and good shopping.

But it also comes with those other city attributes, like traffic congestion, possible noisy neighbors, and all those extra vehicles inevitably create some pollution.

Learn more about Ecuador and other countries in our daily postcard e-letter.
Simply enter your email address below and we’ll send you a FREE REPORT – Ecuador: Live Like Royalty on Your Social Security.
This special guide covers real estate, retirement and more in Ecuador and is yours free when you sign up for our postcards below.