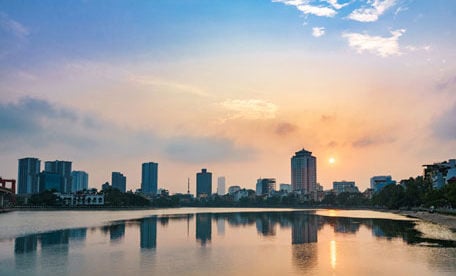 Vietnam is one of the most scenic countries I have ever explored. No matter where I go, I’ll find something beautiful, odd, or just different than anything I’ve ever seen before.

More than a thousand miles of coastline to the east and rugged mountains to the west provide endless opportunities for photographers and nature lovers, while brilliant green rice paddies stretch throughout the coastal plains, the Red River Delta, and the Mekong Delta regions.

I don’t think you can go wrong visiting any part of Vietnam, but you’ll find the most spectacular sights in the northern part of the country, and Hanoi makes a great base to explore this region’s many wonders. Here are a few of my favorite “must-see” places:

The UNESCO World Heritage Site of Halong Bay is the most visited destination in all of Vietnam. Hundreds of tiny islands—many of them inhabited only by monkeys—feature dozens of caves and innumerable deserted beaches. Magnificent limestone towers rise above the waters of the bay like brooding primeval sentinels. Halong Bay stretches out along the Tonkin Gulf, just a three-and-a-half-hour drive north of Hanoi. For an unforgettable experience, I recommend taking a one- or two-night cruise. Bring extra batteries for your camera; the scenery is stunning.

Bai Tu Long Bay is Halong Bay’s northern counterpart, and it’s just as spectacular—maybe even a little more so—than its more famous sister to the south. Since it lacks the UNESCO designation, it isn’t nearly as visited as Halong Bay. The hundreds of tiny, uninhabited islands and limestone towers are just as magical, and there are far fewer people and cruise ships to mar the scenery. I’ve been to both bays and prefer Bai Tu Long for this reason.

The old French hill station of Sapa has been delighting visitors for more than a century. The town is surrounded by the craggy “Vietnamese Alps,” including 10,312-foot Mount Fansipan, the highest mountain in the country. The slopes of the mountains around Sapa are famous for their terraced rice paddies, tended to by colorfully dressed ethnic minority people who look as though they are straight out of a National Geographic magazine.

Guides offer trekking to some of the remote minority villages, but you’ll see plenty of Hmong and Dao people at the markets in town, too. A recently opened gondola runs from Sapa to Mount Fansipan, stopping just a few hundred feet shy of the summit. The mountain that used to be conquered only by the few fit and hardy climbers who could manage the long, arduous trek is now accessible to people of all fitness levels.

The Dong Van Plateau starts just north of the city of Ha Giang, about a six-hour drive from Hanoi. It is a spectacular part of the remote, mountainous region of Vietnam’s far northeast. Spectacular terraced rice paddies climb to the summits of the surrounding mountains, extending beyond the horizon. Further exploration uncovers more gems: Southeast Asia’s deepest canyon, 22 ethnic minority tribes, pristine lakes, pine forests, stone forests, caves bristling with undisturbed formations, and incredible waterfalls are just a few of the many treats that await the intrepid explorer.

Several tranquil rivers meander near the city of Ninh Binh, just 58 miles south of Hanoi. Take a ride on an aluminum rowboat paddled by local village women and marvel at the rugged karst terrain, mountain goats, and lush foliage as you glide along peaceful river waterways through a series of dark grottoes.

You can easily visit Ninh Binh as a day trip from Hanoi, though if you want to stay longer, check out Cuc Phuong National Park—Vietnam’s oldest national park—and visit one of the Southeast Asia’s largest virgin rainforests, complete with easily-accessed primitive caves, thousands of butterflies, and internationally respected primate and pangolin rescue centers.

Mai Chau is the first town along Vietnam’s gorgeous Northwest Loop. You can stay in an ethnic Thai stilt house and explore caves and waterfalls in the rich, hilly terrain where rice is cultivated by the minority people. Mai Chau can be visited as a day trip from Hanoi, or it can be combined into a longer journey with the more remote towns of Moc Chau, Son La, and Dien Bien Phu, returning through Sapa and back to Hanoi for a five- to seven-day adventure.

The Perfume Pagoda is a temple complex just a couple of hours from Hanoi. No roads lead to the complex; instead, small rowboats take visitors past several Buddhist temples—all active places of worship—until they arrive at the base of the main complex. Hundreds of steps lead up to the Perfume Pagoda, though it’s an arduous climb. Fortunately, a gondola is available to ferry passengers to the temple complex and back in just a few minutes. The cave housing the main temple is a large one, with high ceilings and huge formations. It’s a popular pilgrimage site for pregnant Vietnamese mothers, who come here to pray for a healthy baby and many local people here in the north try to visit it at least once a year to pray for health and good fortune.

Be sure to allow a minimum of two or three days to explore the city of Hanoi, as well. Beautiful Hoan Kiem Lake is the living cultural, historical, and spiritual heart of Hanoi and it’s a “must see” place to visit. The ancient Old Quarter is a wonderful place to wander, with its maze of small streets and jumble of shops. Historically, each block specialized in selling a certain item—tin, bamboo, herbs, cloth, pottery—the street names still reflect this heritage. Buy a $0.40 glass of freshly brewed beer at one of the many open-air bia hoi’s and listen to the rowdy toasts, conversations and laughter from the regulars who come here to discuss everything from sports to major business deals. Sip coffee at a streetside café and watch the endless procession of street vendors. It’s a unique way to immerse yourself in Vietnamese daily life.