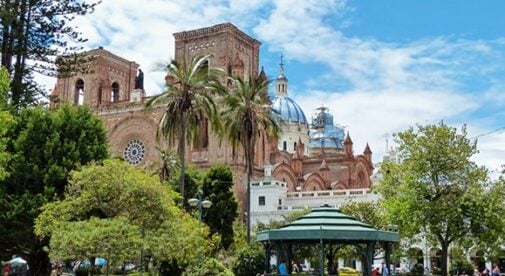 Jim Morgan is hard to miss on the streets of Cuenca. At 6’ 2”, and 195 pounds, bodybuilder Jim (65) towers eight inches over most Ecuadorian men and a foot over Ecuadorian women…he doesn’t blend in. With broad shoulders, bulky biceps sticking out of his tight black tank top, and a gait that announces he’s coming, it’s not a surprise he’s earned the moniker “Strongman of Cuenca.”

While most of us are on our first cup of coffee of the day, Jim begins his daily ritual doing 700 crunches followed by 30 pushups then heads to the gym for an hour workout. “I need the ritual of getting out of bed and starting my workout. It’s a way to get me motivated so I’m not tempted to skip the gym.”

“I’m a bit of a party boy,” he admits. “But even if I have a hangover, I’m out the door to the gym.” He also defies the myth that mesomorphs are meat heads. The man was a rocket scientist who worked on the Space Shuttle program.

Jim grew up in Los Angeles, California, where he describes himself as a typical kid. “I had great parents and lived in a place that afforded me to do many things. I could get up in the morning and surf, go hiking in the mountains, then snow ski in the afternoon.”

His love of flying airplanes came from his father and by the time he was 17, Jim had his pilot license. He learned on a WWII vintage airplane. “You got in front of the prop and turned it to start. It attracted girls; it was better than a hot car.”

He graduated college with a mechanical engineering degree and got a job working at a rocket test lab, testing exotic fuels which occasionally resulted in an explosion. “I was 21,” he says. “At that age you think you’re bulletproof. But I had deep interest in aviation and when the opportunity came up to work on the space program, it fit right into the rest of my life.”

For the next 17 years, he worked on the Space Shuttle Challenger on crew conditions inside the capsule until January 28, 1986, when the Space Shuttle Challenger broke apart 73 seconds into its flight, killing all seven crew members aboard. Although the explosion wasn’t caused by his role, it still had a deep impact on him. “First of all, I saw it explode and felt sorry for the group for sure. But this was also my career and the Shuttle program closed down for two years.”

After the Shuttle program was relaunched, Jim started working on the Space Transportation System (STS) in Florida. “I remember my first assignment was on the STS-26, the first manned mission after the Challenger disaster. My role was to make sure the decompression system was activated prior to takeoff.  In the minutes before takeoff, each system manager would shout ‘Go’ when its system was activated. But the astronauts hadn’t decompressed the cabin which could cause death so I stood up and said ‘No Go’ which no one wants to hear because that ends the launch and cost millions, so they ignored me. I stood up again and said ‘No Go’ in a very firm way and I can be intimating because I’m a bodybuilder. The crew finally depressed the cabin and I sat back down and said ’Go’.”

Jim had to leave his beloved, though often stressful, job when he developed renal disease and had surgery to remove his kidney. By this time, he was married and living in Orlando, where his wife was an executive at AAA and spent the next 10 years traveling with her around the world.

After they divorced, Jim, then age 57, had a hard choice to make. “Do I go back to working full time in a stressful job or look for a place I could live off my savings until I could take my Social Security. That’s when I started considering living overseas.”

After doing lots of research including reading International Living, Jim went on two-week exploratory trip to Cuenca, Ecuador. In Cuenca, Jim found a modern city with lots of modern amenities, like fiber optic internet, cheap transportation where taxis run under $3 to get most places in town, and a temperate climate where he could get outside every day to exercise.

“I chose to move to Cuenca because of the affordable healthcare, the beauty of the city, the low cost of living, and I loved the kind culture.”

Jim moved into a three-bedroom, two-bathroom condo located on a river for only $450 a month in the chic Remigio Crespo neighborhood. It’s filled with lots of outdoor cafés and is an easy 20-minute walk to downtown, where he could explore the French republican and Spanish colonial architecture which earned Cuenca it’s UNESCO Heritage Site designation. “I’m in good financial shape and live on $2,000 a month. I live a good life,” he says.

Jim soon joined The Art Gym where he worked out with both Ecuadorians and expats and found a community of like-minded friends.

The gym sets a healthy course for Jim every day so he doesn’t sit around vegetating and only membership costs $30 a month. “I socialize with Diego, owner of The Art Gymnasia, and expats who work out with me and give me encouragement. We’re always inspiring each other to keep going. I’m building people up; they’re building me up and it becomes a synergy of positivity. It makes me push my limits. It creates a sense mental discipline.”

The positive reinforcement has another benefit. “I have made lasting friendships at the gym.  We have a common bond. It creates a fellowship,” adds Jim.

Larry Scherwitz, an expat friend who works out with Jim, touts the friendship network the gym provides. “If someone is sick, or needs help, we know we can call on each other. We can count on each other.”

Jim touts the benefits of weight-lifting and the confidence that comes from it. “I don’t mind looking at my body in the mirror. But I also developed an appreciation for the mental discipline which comes with doing bodybuilding because it carries into other parts of my life as well. And I would say now more than anything else that is what’s important to me.”

At the Art Gym, Jim starts with stretching and deep breathing to get into a Zen frame of mind. “I need everything I’ve got to do this. You have to focus to do it correctly and if you don’t you can mess up and injure yourself”.

Jim works out at least three times a week concentrating on different muscle groups: biceps and triceps, chest and shoulders, and legs and back. Today he’s working on sculpting his arms.

He sits down on the work bench and deadlifts 100 pounds while Queen’s Another One Bites the Dust blares in the background. Then he stands and breathes heavily spreading his arms wide like an eagle.

As he sits down on the workbench to work on his biceps, Dire Straits’ Money for Nothing drones a steady beat. “The music helps motivate me,” Jim says.

“When people first see me, I get immediate respect and that gives me confidence. Now after I open my mouth, that could change,” he jokes. “But it reinforces that I’m doing something powerful and positive.”

After he has finished three sets on each muscle group he is working for the day, he’s pumped.  As he leaves the gym, Aerosmith’s Walk this Way blasts out from the gym’s speakers…a fitting soundtrack to his exit.

“I would encourage anyone who moves down here to join a gym, even if you’ve never been in a gym before. It’s a great form of socialization. It gets you off your seat and gets you into the community and culture. And that is huge in a positive way,” Jim says.

After living in Cuenca for eight years, Jim has made lots of expat and Cuencano friends. “I love it here. And now that I found Fanny [his Ecuadorian girlfriend] everything is great. She has six children and five grandchildren and I have become part of a family that’s very accepting of me. Plus, my Spanish is getting better because they don’t speak English. It’s a happy ending for me.  My life is rich.”

By the time we retire, we’ve been working stressful jobs which rob us of our connection with our minds and bodies. We are chasing material things which start to own us, we lose sleep worrying about what comes, we medicate ourselves to help us escape what we’ve become. We are driving down a dead-end street.

You can reclaim yourself in Ecuador.  You can build your body back and strengthen your mind and become healthy again. Maybe it’s bodybuilding, or hiking, or walking around the four rivers surrounding the city.

“I have found that when I start with my body feeling invigorated, the mind tends to follow,” Jim remarks. “What’s good for the body, is good for the mind. I tell people to get physical; they can do anything, but just do something.”