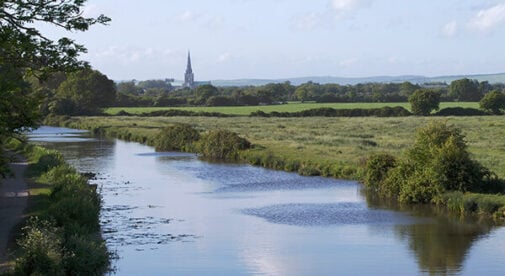 Chichester is a popular second-home destination for the London market. Many owners are based in London or the commuter belt around it.

My senior researcher, Margaret Summerfield, is in England. This is the latest leg of her European tour, as she moves from country to country in search of her perfect base.

Surrounded by sleepy glades and meandering canals, the small city of Chichester has a lot to offer. Ancient cathedrals, Georgian and Victorian architecture, street markets, art galleries, and a symphony orchestra. And all within easy reach of London and seaside beaches.

In her own words, it’s an excellent place to live. But it has one major downside…

Read on to find out more…

A Tale of Two Cities

I lived for almost 14 years in Panama which is home to a world-famous canal.

I’m close to another canal where I’m currently based. They’re not in the same league, however.

The Panama Canal runs for 51 miles. It carries approximately 5% of world trade. It’s a money-making machine that cuts cost, time at sea, and risk for huge container ships carrying everything from liquid gas to cars to flatscreen TVs.

It dwarfs the canal I’m close to now—which is tiny, only four miles long. It’s no longer used to transport goods, either. Instead, it’s become an amenity for paddleboarders, fishermen, joggers, and walkers. Here’s a shot from my morning walk: 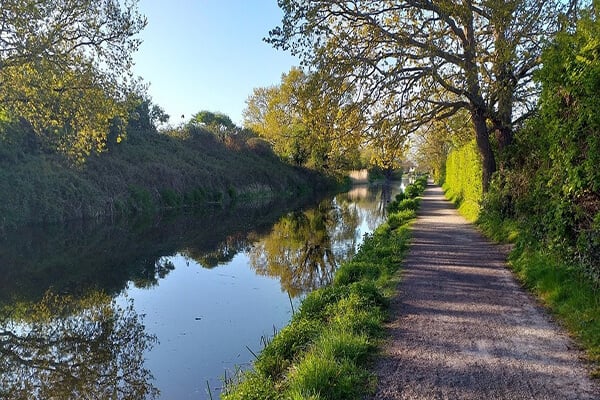 I’m in Chichester, a cathedral city in West Sussex, England. It’s small, with a population of only 26,000 or so. But it’s got a lot to offer.

The city dates back to Roman times when it was called Noviomagus Reginorum. It was a walled city (although the walls were replaced in the Georgian period). Some evidence of its Roman past survives today, with a museum housing original Roman baths in the center of the city. On the edge of the city there are some intricate mosaics, part of a Roman palace, at Fishbourne.

After the end of Roman rule in Britain, the city fell to the Anglo-Saxons. Alfred the Great made use of the Roman walls to establish a fortified city in 878 to 879. By the time of the Domesday book (completed in 1086), Chichester had 300 dwellings and 1,500 people. The Norman invasion of the 11th century saw the township handed to Roger de Montgomerie as a reward after the Battle of Hastings. The city was then besieged in the English Civil War.

You can still see some noted landmarks in the city today. One is the cathedral itself. Construction began in 1076, overseen by Stigand, a Norman bishop. It was remodeled after fires in the 12th century. The spire, cloisters, and detached bell tower were built around 1400. Today, it features some paintings from the 1530s, a stained-glass window by Marc Chagall, and tomb effigies from the 14th century.

The cathedral’s spire is a true landmark, one that can be seen for many miles around the city.

You’ll see lots of fine Georgian and Victorian buildings around the city, too. Pallant House, for example, hosts an art gallery. The oldest side is a Queen Anne townhouse in red brick with stone ostriches (from the original owner’s family arms) guarding the entrance.

Today’s Chichester is very cosmopolitan. The city center is compact and walkable. There are plenty of shops, from big brands to small, family-run businesses. The main streets around the Cross are lined with shops selling clothing, toys, books, outdoor gear, furnishings, and beauty products. Wednesdays and Fridays, there’s a street market selling Danish sourdough bread, tapenades and pates, fresh fruit and vegetables, local cheese. It was revealed recently that the city has more restaurants per head of population than anywhere else in the U.K.

There’s a cultural aspect to the city as well. There are art galleries and museums, a symphony orchestra, an arthouse cinema, and an Open Mic for poetry.

Chichester Festival Theatre is famous. Its first Artistic Director was Laurence Olivier. The Theatre normally has a calendar of plays and musicals. Their summer season attracts actors and directors from London’s West End and farther afield. In addition, there are “side” events—performances, talks, cabarets.

Goodwood House close by has a motor circuit with track days where you can test your skills and an annual Revival. The Revival features historic cars and motorcycles. Even the audience gets into the swing of things, dressing up in vintage clothes. If horses are more your scene, Goodwood’s racecourse dates back to 1802. Goodwood also has golf courses and an aerodrome offering flying lessons and flying “experiences” in vintage aircraft.

For outdoors enthusiasts, there are walks along the city canal. The South Downs national park is just north of the city, with a walking trail that runs for almost 100 miles. The landscapes are stunning—encompassing hills, vales, and cliffs. It’s a good spot for stargazing, too; it’s a Dark Sky Reserve.

West of the city is Chichester Harbour, an Area of Outstanding Natural Beauty. It’s got beaches and dunes, salt marshes and mudflats, and miles of shoreline walks.

For boaters, there are several sailing clubs that host races and regattas. And on the canal, the ocean and rivers in the region, lots of opportunities for kayaking, paddle boarding, and surfing.

It sounds like an excellent place to live. And it is. But there is one big downside.

Chichester is a popular second-home destination for the London market. Many owners are based in London or the commuter belt around it. And this pushes up prices.

Are there bargains to be found?

Tune in next week and find out.

Ronan says: There are advantages and disadvantages to buying in a popular second-home market.

The advantages are that the demand will continue to drive up property values, and you can expect strong rental potential. The downside is that, more often than not, the demand has already been priced into the cost of the property—meaning you’re paying inflated prices, along with everyone else.

As an established high-end destination, Cabo’s market has long been dominated by multi-million-dollar listings. It’s home to world-class resorts that charge thousands of dollars for a night…gourmet restaurants owned by Hollywood royalty…

The “entry point” of the Cabo real estate market is $250,000 to $500,000. This is the really broad and active segment of the market—the sweet spot. The kind with the broadest appeals for a swathe of long- and short-term renters.

But we’re not buying at market price. Like I say, we’ve used our RETA group buying power, seized a special moment, and made the right contacts to get a price no one else will ever have.

I figure on gains of $141,800 three years after delivery. I think renting short-term you could bring in $40,000 when the community is established.

I’ll be telling you more about what we’re getting in this incredible deal tomorrow.

If you’re a RETA member, you can get my special opportunity report, right here.

What Kind of Real Estate is for You?