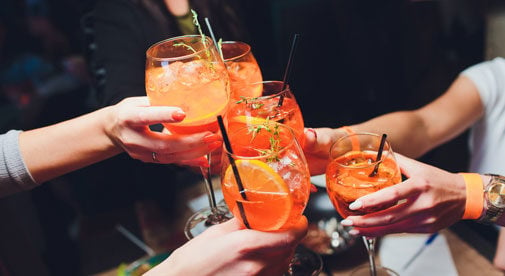 One of the most exciting things about exploring a new country is the native food and drink. We asked our editors and correspondents from around the world to recommend the must-try drinks you should try when you visit their country.

Below, they give their top recommendations.

This simple but tasty alcoholic cocktail is Peru’s signature drink and is far too easy to consume. It’s sweet and tangy and frothy because of whipped egg whites.

“Pisco sour is sort of like an adult SweeTart,” says Jeff D. Opdyke, editor of The Savvy Retiree. “One part Simple syrup, one part lime juice, one part egg whites, all shaken together vigorously with three parts pisco, a brandy endemic to the wine regions of both countries. A frothy concoction great for summer sipping.”

“Italy is known for its excellent wines, but come summer it’s Spritz time—a cold sparkling glass of summer sun that has been all the rage here for several years and is now catching on abroad,” says Valarie Schneider, IL Italy Correspondent.

“It started in Venice (or Padova, they vie for owning rights) and can be made with Aperol (the Padova version), Select (hello, Venice) or Campari (for rebels) topped off with white wine, usually prosecco but true Venetians use still white, and a final “spritz” of sparkling water.

“It’s one of the few drinks in Italy that is generous on the ice, and it goes down easy. The Spritz craze goes to the max in the Emilia Romagna region, where bars offer their own signature combinations with different liqueurs or herbal essences.”

“It’s quite simple to make and it has a distinctive flavor.

“Put all the ingredients in a large, covered pot filled with water, bring to a boil and then simmer for 60 minutes. Remove the lid and continue to cook for 20 more minutes. Remove the pot from the burner and let the mixture cool. Take about half the corn and blend it in a food processor. Return it to the pot and mix well. Transfer everything to a clay pot and refrigerate for a couple days to ferment.”

“Panama produces several rums, but my favorite is Abuelo—the 12-year was awarded a Gold at the 2009 Ministry of Rum Tasting Competition and here in Panama it is just $30 for a 750 ml bottle,” says Jessica Ramesch, IL Panama Editor. “The 7-year is just $16.50 and so good you can sample it neat or over ice, while the regular Añejo is $8.25 and perfect for a pintado—two shots of rum, club soda and lime to taste, and just an ounce of cola. Abuelo means grandfather so you could say Abuelo rum is the grandfather of all rums here in Panama…it’s been around much longer than its competitors with their fancy bottles. I’ll take a regular Abuelo over any other rum any day.”

While so many IL editors and correspondents raved about their local booze, Jessica offers a cautionary tale:

“Panama’s original spirit, Seco Herrerano, is strong stuff, distilled from 100% sugar cane via a four-column process and charcoal filtered for a smooth finish,” she says. “It’s made near the sugarcane region of Pesé by Varela Hermanos, a family-run distillery that dates back to 1936.

“It can be mixed with orange or grapefruit juice (I like a blend of both) or used to make cosmos…it works for pretty much anything you’d normally make with vodka, as it’s similarly neutral in flavor. A 750 ml bottle is just under $7 so it’s more than affordable. But unless you’ve got the constitution of a college student you may want to learn an extremely important phrase… before going to any festival or big family party in Panama: ¡No gracias!”

– Would you like a Seco con leche? (Seco and milk…ugh!)

– Would you like a Chichita Panamá? (Trick question! That’s Seco with pineapple juice!)

Portugal is famous for wine, but what about cocktails?

“Medronho is unique to Portugal. It’s a spirit made from Medronho berries, which grow wild especially in the south in the Algarve and in the interior, the Alentejo,” says Tricia Pimental, IL Portugal Correspondent.

“Store-bought is about 40% alcohol, but homemade can be higher. A cocktail made with it is Melosa, made from Medronho, honey, cinnamon, and lemon. Great if you’re fighting a cold, but fun no matter what.”

“I’m not an expert on alcoholic beverages, but I’ve seen practically everyone in Vietnam drinking at least a few shot-glasses of rượu, or traditional rice wine, after dinner and well into the wee hours,” says Wendy Justice, IL Southeast Asia Correspondent.

“Depending on what part of the country you’re in, the wine can be as potent as the strongest whisky or mild, slightly sweet, and fruity. Most varieties contain around 40% alcohol. Many people store their rượu in large, ceramic jugs, where it is drank communally through long reeds. The liquor can be produced in as little as a week, and many families make their own.”

Rượu is popular throughout Vietnam, as it has for many centuries. You’ll hear locals boisterously toasting “Mot, Hai, Ba, Dzo!” (Cheers) in the south or “chúc sức khỏe” (to your health) in the north as glass after glass of the potent brew is consumed.

Here is a traditional recipe for Belizean Rum Punch.

Combine all ingredients (except dark rum) in a cocktail glass, add ice, and then add the final splash of dark rum on top.

“Another way to have this drink is to pull a coconut off a tree, use a machete to make a flat bottom, and then machete off the top until you have a hole big enough to pour in extra liquor,” says Laura Diffendal, IL Belize Correspondent.

“Add just a shot of coconut rum, a straw, and a hibiscus flower. This is the simple and nature-based way to make the drinks if you don’t have access to all the ingredients.”

“It is a rum based cocktail and you will need 45ml Jamaican rum, 20ml Campari, 15ml fresh lime juice, 15ml simple syrup, and 45ml pineapple juice.”

“Since I prefer my Sangria on the dry side, I forgo adding grenadine or blackberry liqueur and substitute sparkling water for 7-Up. If you want a sweeter drink, add sugar to taste.”

Guaro is a Costa Rican liquor distilled from sugar cane.

“I liken it to a cross between white rum (although not as sweet) and vodka,” says Kathleen Evans, IL’s Costa Rica Correspondent. “The most popular shot in the country is called the chiliguaro and you can find it at any bar. The ingredients include: guaro, tomato juice, hot sauce, and lime. If you like bloody Marys you will love chiliguaros.