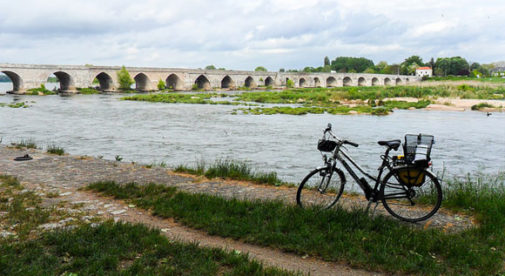 I’m at Fontevraud Abbey in France’s Loire Valley, gazing at the face of a man who left this world over 800 years ago. Fontevraud was the final resting place of Richard the Lionheart—or at least most of him. Arguably the most famous of England’s Plantagenet rulers, the crusader king died in 1199. If his reclining effigy is a true likeness, he was a handsome brute.

He probably didn’t look quite so handsome after being partitioned. In the crazy days of the early Middle Ages, removing the organs of aristocratic corpses—a practice known as partitioning—was fairly common. So Rouen got Richard’s heart. Châlus got his entrails. And Fontevraud Abbey got the lion’s share of what was left.

Presided over by a succession of Abbesses for almost 700 years, Fontevraud is the largest abbey complex in Europe. Its 35-acre demesne once contained both monasteries and nunneries, and a sizeable settlement grew up beside it.

Surrounded by forests and vineyards and with châteaux in every direction, the village of Fontevraud l’Abbaye is a charmer. And it’s lively. Concerts are held at the abbey throughout the year—everything musical from rock to baroque. It’s used as a cultural center, too. Should you go before next May, don’t miss Julian Salaud’s La crypte des effraies (“the crypt of the owls”), a stunning art installation that will delight your inner goth.

From gourmet dining to cheery cafes, options for eating out in the village are plentiful. As it gets rave reviews, I wanted to try Le Restaurant in the Abbey’s former priory. Its head chef is Thibaut Ruggeri who won 2013’s Bocuse d’Or gastronomic prize, but it only opens for Sunday lunch and in the evenings. With so many places along the Loire to investigate, I had to move on. I could only salivate at the thought of what pigeons covered with a cognac marzipan must taste like.

Thanks to the Lorie Valley’s historic links with royalty and medieval nobility, it’s often assumed that properties here must have a price tag to match. Not true. One of my real estate contacts has a small house (731 square feet) with an open plan living areas, two bedrooms, and a bathroom in Fontevraud l’Abbaye for $94,500, and $150,000 delivers a lot of options.

In the village of Samur, 15 minutes away, is a two-bedroom apartment in a restored 17th-century building. Located on the riverside there’s an open-plan living, kitchen, and dining area, and small garden for $123,700. Samur is a town with a storybook chateau of white stone, a weekly market, and vineyards on its doorstep.

Affordable homes in such a lovely area aren’t the only surprise. Although I’d read about Fontevraud’s effigies, I knew nothing about the abbey’s later history. So I didn’t realize that until relatively recently, its cloistered inner courtyard was where bad boys took their exercise. Not long after revolutionaries sent the last Abbess packing in 1792, Napoleon Bonaparte transformed the complex into a prison. You wouldn’t guess now, but it remained one until 1963.

And it was one of France’s toughest. Although he served his own prison sentences elsewhere, the writer Jean Genet (a petty thief and male prostitute in his younger days) kept louche company. An exhibition is dedicated to the abbey’s prison days and Jean Genet himself. Even into the 1950s, prison life was harsh. Lunch normally consisted of potato and cabbage soup, cigarettes were limited to three per day, and violent inmates were crammed into impossibly small structures nicknamed “hen’s cages.”

A heartless king, owls in a crypt, and ghastly tales of prison life—I couldn’t wish for more. Whenever I explore places like Fontevraud, it’s always a perfect day. Yes, even without pigeons in cognac marzipan.