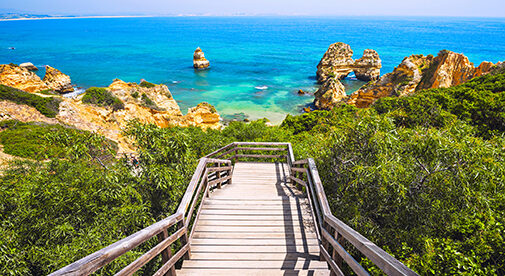 Last month, LA Magazine wrote that Portugal has become the go-to destination for Californians in search of reinvention and rejuvenation. ©Poike/iStock

Back in 1965, The Mamas and Papas released the single “California Dreamin'” and cemented the idea of The Golden State as a place of sunshine, surf, and the good life.

But while California still has plenty of sunshine and surf, in recent years rising costs of living and sky-high property prices have taken a lot of the good out of life in much of the state.

The San Francisco Bay Area in particular has become a byword for unaffordable housing, consistently being ranked as one of the most expensive real estate markets in the world. The typical price of a home in this area today is around $1.5 million (meaning half are priced even higher). Not a bad market if you’re selling—but not one I’d like to buy in right now.

So it’s no wonder that Californians are looking outside of their state to find that life The Mamas and Papas sang about so long ago.

Thing is, they’re looking even farther than that… All the way to the sunny, low-cost Portugal.

Last month, LA Magazine wrote that Portugal has become the go-to destination for Californians in search of reinvention and rejuvenation.

“It’s the new chic spot to grow a startup, forge an international team, buy an apartment or truly live. The cost of living is less than half that of California, dinner for two runs about $25, good vinho de supermercado is cheaper than our state’s bottled water, and the work-force malaise and politicization of the pandemic that have gripped the Golden State and the nation are refreshingly absent.”

In many respects, Portugal has become California’s “European Twin,” even down to the fact that’s it’s a growing hub for tech innovation. Earlier this month, Lisbon held the Web Summit, the biggest, most influential technology conference on the planet.

When it comes to that easy-going, laidback California beach lifestyle, it’s all about the Algarve and its incredible golden-sand beaches. And there is nowhere on this southern coast that encapsulates this better than Lagos.

This town is a pretty and happening place, compact, low-rise and walkable. There’s a height restriction on building here and from spots all over town you can catch breathtaking views of the bay, fringed by miles of golden sand…

You can walk from town to the beaches. You’ll find semi-secret sandy coves, long stretches of golden sand, cliffs, sea stacks and bluffs.

The coastline and climate remind folks of Southern California, though I’ve heard some say the oranges are even sweeter here.

Stand in the shade of a flowering tree beside the 15th-century church of Santa Maria and you can see the entire sweep of the bay.

You can dine on grilled sardines, eat clams in garlic or try piri piri chicken, and wash it all down with a delicious local wine.

One of the first things you notice near the excellent marina is a replica caravel—the type of boat that carried Portuguese sailors across the world from Lagos beginning in the 15th century. It’s a museum and you can board it for a look.

Not only is it beautiful here, but real estate in Lagos is booming and can be super profitable if you know where and how to look (which I do).

Lagos is a place where best-in-class property is in incredibly hot demand. By getting in early on the right condos, in the right locations, we can do very well. Demand is surging, supply is scarce, and there are constraints that put serious limitations on availability.

For years Lagos has been benefitting from a Path of Progress moving west along the Algarve. When development first came to the Algarve, it rolled out west of Faro, where the international airport is, toward Vilamoura. That’s where the major resorts, golf courses, hotels, and condo communities first developed, before moving farther west towards Lagos.

Lagos is the last major stop on the Path of Progress here. And because most of the early tourist growth hit towns closer to Faro, like Albufeira, Lagos avoided the same unrestrained development. It remains low-rise and protected.

And that protection is good for savvy real estate investors like us.

Members of my Real Estate Trend Alert group who have bought there are sitting pretty.

One RETA member bought two condos as investment properties in Lagos about five years ago for approximately €430,000 each. They rented them both, bringing in an average of about €30,000 (a 7% gross yield) a year each and recently sold one for €650,000. Those are some serious gains…

Last year, I recommended condos in a community called Adega—built by a developer I have worked with before. A couple of months ago, I got word that a RETA member who bought there was already getting offers €160,000 ($179,538) higher than what they paid.