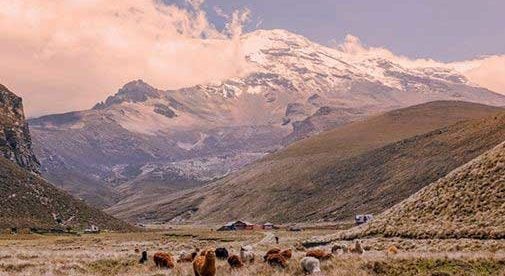 I am literally shivering, wishing I had on gloves and a heavier coat while staring up at the glacier on Chimborazo Mountain, Ecuador, and I’m not even out of the car yet. The temperature is a chilly 26 F at an elevation of 6,268 feet, but once I step outside the car the wind factor knocks the temperature to 8 F, which requires something more than a windbreaker.

But it’s winter in Ecuador and this is the Andes Mountains after all.

The view of the massive snowcapped mountain just three hours south of Quito, on this sunny clear day yields spectacular views so I amble out of our SUV, to watch bundled-up backpackers start ascending what looks like a sideways ice rink on what is claimed to be the tallest mountain in the world.

However, Mt. Chimborazo is the tallest, standing at 6,384,404 meters from the Earth’s center beating out Mt. Everest at 6,381,670 meters. So why does it even matter? For those who want bragging rights to climbing the tallest mountain on earth, climbing to Chimborazo’s summit is cheaper, lower in altitude, easier to get to, and only takes eight to 10 hours to ascend, as opposed to two months to climb Mt. Everest. This makes the climb to the highest place on earth within reach of mere mortals, otherwise known as amateurs by the indigenous.

But just because it’s a shorter climb, doesn’t mean it’s less challenging, and Chimborazo has sidelined many inspired climbers including famed explorer Alexander von Humboldt, who in 1802 narrowly failed to reach the summit turning back due to altitude sickness and inclement weather.

Getting to discover places like Chimborazo is why I love being an expat and living in Ecuador. One of the reasons I retired to Ecuador is because it offers so much variety for site-seeing: the Galapagos Islands, Amazonian jungles, and the Andes Mountains.

I’m a true Florida girl, so when our guide Juan Perez suggested we take the back roads home to Cuenca to see the famed Chimborazo from Baños, where we were visiting, I jumped at the chance.

To get to Chimborazo, we drove by the Reserva de Produccion Faunistica Chimborazo, a 58,560-hectare protected ecosystem formed to preserve the habitat of the Andes natives. It conserves the water supply from mountain rivers to nearby towns, and protects the vicuñas (a smaller version of a llama), llamas, alpacas, deer, and other wildlife living there as well as the multitude of flora that thrives around the mountain.

As we pass, Juan explains that “the vicuñas’ wool is the priciest wool in the world and used to be reserved only for Incan leaders.” I’m thinking a wool poncho would be nice about now. But the cost of vicuñas’ wool sells for anywhere from $1,300 to $3,000 per yard and has strict guidelines for harvesting, so I take a pass.

Not long after passing the reserve, we started seeing herds of vicuñas, roaming at the base of the Chimborazo and posing unassumingly at passing cars filled with tourists snapping photos.

As we sped towards the mountain, Juan regaled us with tales about Chimborazo.

“Did you hear about the airplane crash here in 1976?  It had around 59 passengers and disappeared on a Quito to Cuenca flight.  Some climbers found the plane 26 years later at nearly the top of the mountain and recovered all the bodies. Some people thought it was hijacked or taken up by UFOs and would never be found. But climate change has caused the glaciers to melt, which caused the plane to appear.”

Juan’s last story turned out to be inspiring rather than chilling as he pointed to the ice caps of Chimborazo and talked about the ‘Last Iceman’, Baltazar Ushca, 84, who for over 50 years has climbed four hours up to the glacier with a donkey and pick axe and chipped away blocks of ice, wrapped it in straw bundles and then carried it down to sell as the purest ice in the world to vendors in nearby cities.

As refrigeration has taken over his fledging ice business and as the glacier slowly melts away, a few vendors have remained faithful to his efforts, selling the blueish glacial ice to locals and tourists wanting to taste this priceless commodity—which still sells for $2.50 per 80-pound block of ice.

Standing at the foot of Chimborazo in all its magnificence you can understand why walking alongside a donkey for four hours for fancy ice cubes is worth it. I’ve seen photos of Chimborazo countless times but standing there looking up I feel the size of an ant.

Breathing in the briskness and freshness of untarnished air while vicuñas graze peacefully on vast arid land is real life and thousands of people before me have stood right where I’m standing, and will be doing so long after I’m gone. It’s humbling. We headed out after about 30 minutes, because we still had six hours to log before getting to Cuenca and wanted to make a few more stops.

As we ventured out again on back roads, Juan next took us to Pelileo, known as the Blue City, because of its booming jean industry, where rows and rows of jean-clad torso-only mannequins line the streets in a whimsical but a little creepy display. We drove through another small town which pretty much just sold leather shoes—all kinds, all types, but not all sizes as my sister discovered after going in just about every store just in case.

But my favorite sideshow was our visit to a small town pretty much comprised of a Catholic Church and town bar located across the street from each other and not much else, until you venture down a few blocks and springing out of nowhere, is a topiary garden reminiscent of something you’d see at Disney. I wish I could tell you the name of the city or exactly where it is (and I will continue to track this down), but I can give you directions Ecuadorian style “after leaving Chimborazo it’s a turn off the highway when it curves and you look for a group of cows on the left and meander down this street until you find the church and go straight”. This is why you need a guide.  I wonder, what kind of person comes to the middle of nowhere to build a topiary garden, in the same manner I wonder why an elderly man would climb up a glacier to chop ice.

Ecuador teaches me every day about the simple grandness of life. Laughing with Juan on a road trip while sharing stories erases borders. Shopping in a small town filled with pant wearing torsos is way more interesting than a mall and getting lost in a garden filled with animal topiaries out in the middle of nowhere reminds us that no matter where you go, the world is full of extraordinary things.