For generations now, Ecuadorians have been proclaiming their country to be “La Mitad del Mundo” (the center of the world) and it is exactly that. With the equator running through the middle of the country (hence the name Ecuador), this land in the northwest corner of South America is bordered by warm waters of the Pacific Ocean on the west, the jungles of Columbia on the north, and both jungles and deserts of Peru, which wraps around both the eastern and southern borders of Ecuador.

To put the location of the country in the perspective of air miles, it’s 1,786 miles southwest of Miami (about three hours, 45 minutes by air), and 2,820 miles (five hours and 50 minutes) from New York City.

Because Ecuador is on the equator, its lowlands are warm (and in some cases hot) 12 months out of the year. Ecuador has rainforests, lush farm country, and even some desert land scattered around its 109,484 square miles of land (about the size of the U.S. state of Nevada.) There’s arid land in the north and southwest; but the eastern third of the country is part of the Amazon River basin, with annual rainfall of almost 200 inches. The mitigating factor in Ecuador’s climate, however, is the Andes mountain range, which runs south to north through the entire country.

Mountain altitudes as high as 20,000 feet above sea level give the country some peaks that are snow-capped year-round, and high-altitude, major cities like Quito and Cuenca in which it never freezes, but the temperature never goes higher than the mid-70s F even in summer.

Altitude and Temperatures in Ecuador 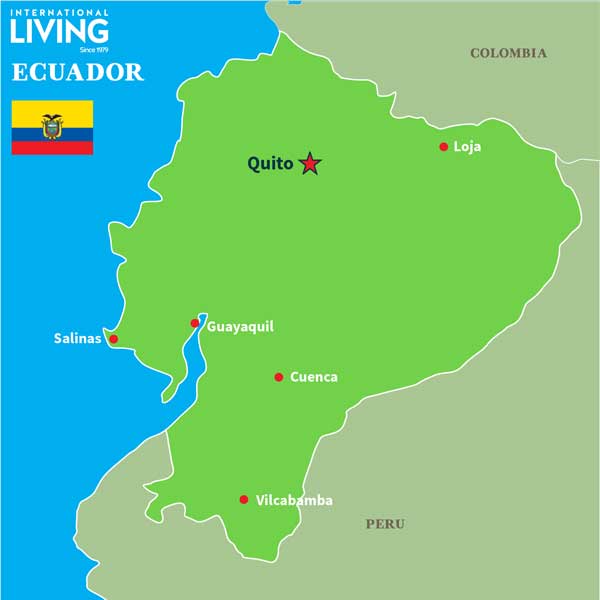 The equator is only a few miles north of downtown Quito, in the northern third of Ecuador, meaning that the southern two-thirds of the country is in the Southern Hemisphere—where December is a summer month and June is in winter—so the seasons are reversed in the two hemispheres.

And since the equator runs right across this country (which is about the size of the U.S. state of Utah and is in the northwest corner of South America—bordering Colombia to its north, Peru to its east and south, and the Pacific Ocean to its west), it’s safe to assume that when you are packing your bags for a visit here, that there’s no need to throw in a coat, right?

But if you let the “equator always means hot weather” theory dictates your travel plans, then you are likely to fall into a trip that illustrates another concept that’s seldom wrong: “a little knowledge is a dangerous thing.” 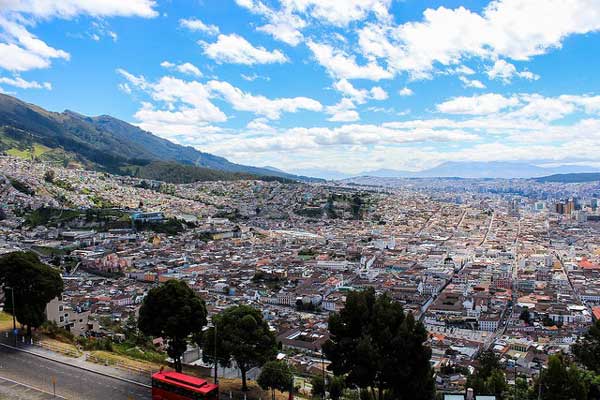 It can get legitimately cold in much of Ecuador, including the capital of Quito and my newly adopted hometown of Cuenca. That’s because of another geographical fact about Ecuador—the majestic and formidable mountain range, The Andes, runs through the middle of the country from north to south. So Ecuador is at the confluence of two major, climate-determining geographical forces.

Those two forces, latitude and altitude, are at war with each other, and once you start getting above 6,000 or 7,000 feet above sea level—altitude wins. Our house in Cuenca is at 8,425 feet above sea level, and we sleep under a blanket every night. I have a digital thermometer in our bedroom and in “summer” the temperature reads 65 F and 62 F in “winter.” (I use quotation marks around the season names because there really are no seasons, at least none defined by temperature—there is really only a rainy season and a dry season).

And oh yes, our equatorial location offers another gift—at least a gift in my opinion—the sun rises at 6:30 a.m. and sets at 6:30 p.m. 365 days a year. I like the stability of that. There is no Daylight Savings Time—that’s something for the U.S. and other far-away places.

So in the mountains, which cover about a third of Ecuador’s land mass, you’ll find coolish to cold temperatures much of the time, although “cold” would be in the 50s F, with the rare drop into the mid-40s F. There’s never ice or snow in high altitude cities like Quito or Cuenca—that happens up in the mountains above the cities. 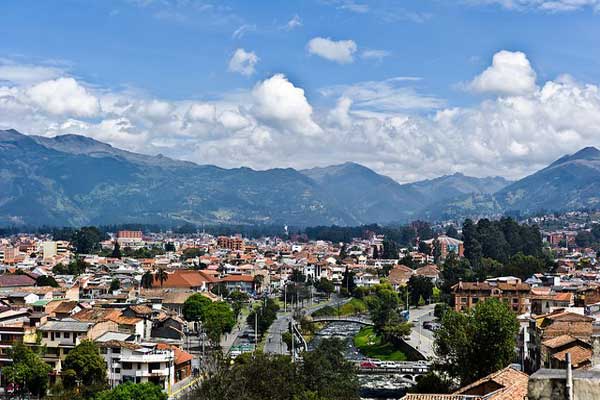 Cuenca is famous for its colorful festivals, distinct food, and breathtaking scenery.

If you fly into Ecuador’s busiest airport in Quito and then fly southward to Cuenca, you could get the impression that this country on the equator is something like Switzerland in late spring—lots of green farm land with snow capped mountains as far as the eye can see—even from your 35,000 feet vantage point.

Take a look at an altitude map of Ecuador and you’ll see that only a quarter to a third of the country is in the Andes Mountain range. Go east or west from the Andes and you’ll find that Ecuador gets low, flat, and quite warm very quickly. Fly into Guayaquil, the largest city in Ecuador with a population of 1.95 million and you will immediately decide that shorts and a tee shirt will likely be your wardrobe at all times during the visit. The average daily high temperatures are going to range between 91.3 F in December and 86.8 F in July.

I tell my friends two things about Guayaquil: First, Guayaquil is going to be like Houston or Miami in summer, only it’s always summer there because, there is almost no temperature variance at all as the “seasons” change. 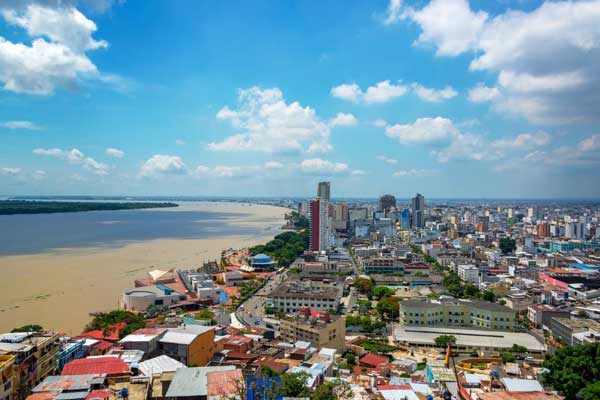 It is estimated that as many as one out of every five Ecuadorians live within an hour of downtown Guayaquil. ©iStock.com/DC_Colombia

Secondly, don’t worry, just like Miami or Houston, every building in Guayaquil is air conditioned 24/7. And Guayaquil, with a big airport and lots of direct service to cities like Los Angeles, Denver, Miami, and key European cities, makes a great gateway to Ecuador. And once you arrive, you are very close to compelling Pacific beach destination like Salinas.

Another note about altitude and temperature. They do not constitute a fixed “either/or” choice when visiting the country. There are scores of “in between” altitudes that allow the country to claim to having the most natural biospheres of any nation on earth. You can be in an Amazon river delta rainforest in eastern Ecuador with lush ecologically-oriented resorts in the morning, in a region with green, rolling farmland that is not unlike Ireland in the middle of the day, and be in the mountains overlooking the Los Angeles-like city scape of Quito by night.