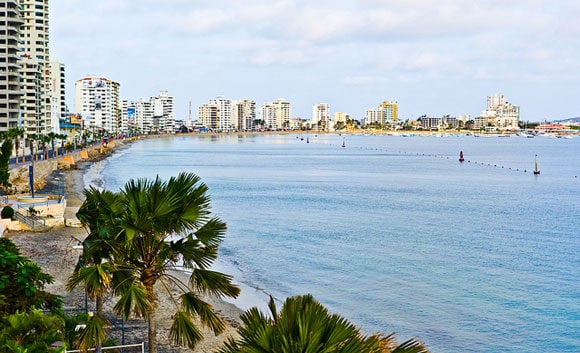 Unless you’ve traveled to Ecuador, you may not understand how very diverse this country is. It really does have everything…from the Galapagos Islands to the Amazon basin and the Andes Mountains, from big, modern cities to small, quaint villages. And up until now, one particular area of Ecuador has been overlooked—and that’s its 937 miles of Pacific coastline and its beautiful mainland beaches. But all that’s about to change.

Ecuador tourism and government officials are now making a concentrated effort to promote the country’s breathtaking western coastline. They’re going all out to attract tourists to these beaches, and behind that effort are new infrastructure projects. For instance, construction of the new bridge over the Rio Chone was finished recently and has made one stretch of Manabi province’s beautiful coastline more accessible than ever before.

What does this coastline look like? Imagine California’s Pacific Coast from Malibu to Santa Barbara before the Pacific Coast Highway was built. Imagine stretches of the coasts of Mexico and Costa Rica…those areas where the mountains come right down to the sea, with rocky cliffs and wide deserted beaches…and you’ll have some sense of the beauty of this coastline.

Salinas, Ecuador’s largest coastal resort, offers one of the country’s best real estate investment markets and most popular and most upscale (for Ecuador, that is) beach lifestyle. Located at Ecuador’s western-most point, Salinas is sometimes called “Little Miami Beach” because of the plethora of white mid- and high-rise condominiums that sprout from the sand and curve around a crescent bay. Then again, except for the sun, sand, and surf, it’s really nothing like Miami. Although the town has a permanent population of less than 40,000, the number swells to more than 100,000 on holidays such as Semana Santa (the week before Easter), Christmas, and New Year when condos, rentals, and hotel rooms are filled to capacity. Salinas is a fully-fledged beach resort—among Ecuadorians, it’s probably the country’s best-known resort. This is the place for those who like all amenities: modern condominium buildings (which line much of Salinas’s miles-long beach), restaurants, coffee shops, bars, and discos. Plus there’s regular bus service to Guayaquil, only two hours away, which has an international airport. All of this makes retirement in Salinas an attractive option.

Salinas is also a great place for those who want to escape those long, cold North American winters. The sunny season goes from mid-December through April, and you’ll find the warmest waters between January and March.

The beach here is wide, sandy and clean, bordered by the blue, calm Pacific waters. To the left, the sun is gleaming off a few dozen yachts and sailboats parked in the marina. While the entire beachfront is bustling during peak periods, it tends to quiet down as you go west along the water. Salinas is a relatively small town. The beach is divided almost perfectly in half by a jetty where you’ll find the docks of the Salinas Yacht Club. The sandy half-moon bay on the north side, where the abundance of action takes place, is Salinas Beach. To the south is Chipipe Beach, quieter and more family oriented.

Despite the flurry of activity that is Salinas, it may be one of the world’s least-expensive beach resorts. A nice private room in a boutique hotel just one block off the malecón (boardwalk) can be had for $30 a night for a single. A steak or seafood dinner in one of those trendy restaurants will set you back just $5 or $6. Or chow down on fish or shrimp, cooked any way you like, at the local mercado (market)—more than you can eat for about $2.50. Real estate in Salinas is affordable. You can still find new condos with floor-to-ceiling views of that gorgeous half-moon bay. With three bedrooms, three bathrooms, and a maid’s quarters, one was recently priced at just $130,000.

Despite being this coast’s upscale, all-amenities option, prices in Salinas are still low. Modern two-bedroom condos on or near the beach will cost you little more than $150,000. In family-style neighborhoods just a few blocks from the beach, there are three-bedroom houses, often with lawns and garden areas, going for about $100,000.

Cost of Living in Salinas, Ecuador Daily living costs in Salinas are low. There are shopping malls with modern supermarkets near the city line between Salinas and the town of La Libertad; there is also a traditional market, where a few dollars can buy you a bagful of fresh fruits and vegetables.

Prefer to eat out? In central Salinas you’ll find plenty of food stalls, where you can buy freshly-cooked seafood or homemade ceviche. A meal in these stalls will set you back only a few dollars per person—or pay slightly more if you prefer a restaurant right on the seaside malecón.

Here’s an example of a monthly budget for a couple living in Salinas: