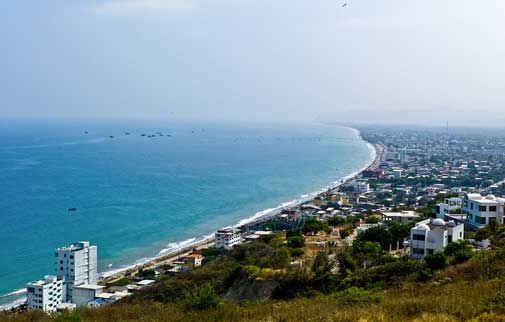 Crucita, Ecuador, about 25 miles north of the port city of Manta, on the shores of the beautiful Pacific Ocean, has become a Mecca for parasailers and paragliders from around the world. Like its sister beach of Santa Marianita, to the south, known for its famous winds and kiteboarders, Crucita takes its strong winds and high launch points to call to the higher altitude adrenaline junkies.

The resulting phenomenon of sailing above the miles of perfect beach and blue ocean has transformed this once small fishing village into one of the world’s most famous high altitude parasports venues. Better roadways into Crucita have made it much easier to get there, with road improvements from the south on the Ruta del Sol and with a new highway in from Portoviejo, its largest nearby city. Crucita is also one of the few beach towns with regular bus services to Manta and Portoviejo, making it very attractive to residents and visitors alike.

What happens when you make something so beautiful much more accessible? More people keep coming to visit, and more of them stay to live there. There are expats from around the world living nearby, with most of them hailing from the United States and Canada, but there is a smattering of Europeans who have settled into the easy lifestyle that Crucita offers, too.

The numbers vary, but most estimates are that there’s probably 50 to 100 full-time and part-time expats living in the neighborhoods and communities that make up Crucita. Condominiums, gated communities, and single-family residences dot the beachside and the adjacent hillsides.

So, okay, you’re not ready to don a “sail” and jump from the mountain? I can’t blame you; I probably wouldn’t be in that line either. If you are, and yearn to fly, contact Parapente Crucita Manabi, a well-known parasailing venture on top of La Loma, the big hill on the south side of town. They’ll help you sail to your heart’s desire.

But there’s lots of other things you can do here, starting with just heading for the beach. Air temperatures here are usually in the low to mid-80s F, with the water about the same. It might cool down a bit during the chilly (joke) months of July through October (75 F to 80 F every day, nights a little cooler), but the beach here is always an option. Sunny days, a nice breeze, and a fine-grained sand make a trip to the beach a pleasant experience almost any time.

You want a nice place to stay that’s going to leave you with some money in your pocket, right? There is a terrific place to stay situated right on the beach, with a great restaurant and excellent service. The hotel, El Viejo y El Mar, is a new addition to one of the town’s best restaurants. Their restaurant, Motumbo’s, opened in 2004, and is famous as a place whose varied menu makes it stand out and above most of the other beach restaurants. They serve lunch and dinner, offer a Kid’s Menu, and have a fully-stocked bar for your drinking pleasure. 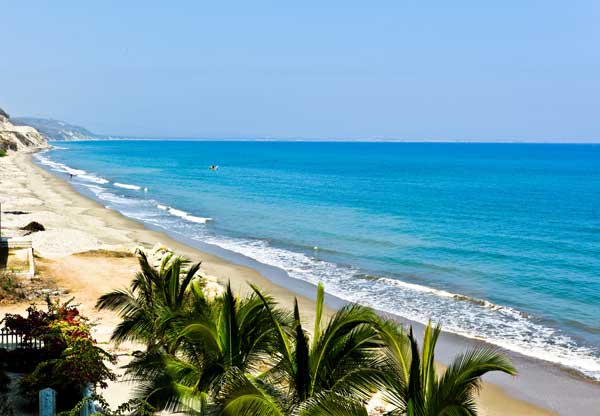 The Hostal El Viejo y El Mar opened in 2014 to better serve the growing demand in Crucita for good, clean lodging at a reasonable price. The owners, David and Denise, are onsite and very accommodating. They offer rooms for individuals, couples or families that need a little more space. Both the restaurant and the hotel come highly recommended by expats and Ecuadoreans alike, and offer direct access to the beach.

If you’re looking for a more traditional beachside restaurant, Las Gaviotas on the Malecon (the road on the beach) could be worthy of a look-see, too. It has all the coastal seafood of the region; lots of shrimp in all sizes and preparations, mixed seafood plates, and my favorite fish in all of Ecuador, the camotillo. This flaky white fish is cooked and fried whole, with the head and tail, and it’s eaten using your fingers mostly. It’s boney, so picking it off the bones becomes necessary, and it’s fun to eat. Camotillo are local to the provincial waters here, and eat only shrimp as their natural diet, resulting in a very nice flavor; it’s definitely worth a try.

Another local beachfront restaurant worth mentioning is the Zona Fria Bar and Restaurant. Like Las Gaviotas, the Zona Fria specializes in fresh seafood dishes, cooked Ecuadorean style. These three restaurants are on the main beach road, not far from each other.

A few minutes north of town is the area known as La Boca, where the Rio Portoviejo empties out into the ocean when the waters rise during rainy season. The riverfront area has a mangrove forest walk that is very popular with visitors. La Boca offers lots of places to stay, good restaurants, and a nice beach. During whale watching season, June through September normally, local boat captains will take you out to get up close and personal with humpbacks and gray whales. Fishing trips can also be arranged with some of the local fishing captains for a very reasonable fee. I have heard that there are snorkeling excursions at certain times of the year, but I wasn’t able to confirm this; like the fishing and other activities here, a lot depends on whether the river is open to the ocean.

So, Crucita is one of those magical places on the coast of Ecuador that offers so much, for so little. It’s a great day trip, weekend excursion, vacation, or as many have already done, it’s a terrific place to live. It’s your choice. Fly the skies, hit the beach, go fishing, eat food, watch gorgeous sunsets and enjoy. It’s all in Crucita.

A Beach Town in Ecuador Saved Our Retirement 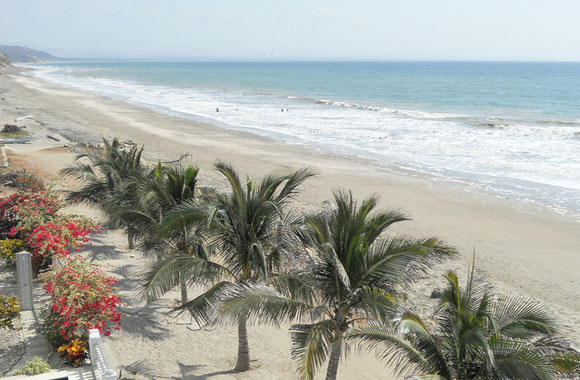 A typical day for Louise and Gary Mullins includes breakfast by the ocean, a walk on the beach, some Spanish study, and then whatever the couple feels like doing. There is no schedule to keep in Ecuador.

“Visitors stop by or we go out; many times my friends and I decide to escape to a new place and explore. Most afternoons we take a few dips in the pool, lunch in or out, and a little late afternoon reading or Judge Judy. We have Slingbox (a device that enables you to access U.S. programming overseas) set up in Houston,” says Louise.

Louise was raised in Kansas and, from the first time she saw a world map, she could envision herself traveling the globe. That didn’t happen. She married Gary and her big adventure was a move to Texas, where they lived for over 30 years. But she never forgot that map.

Gary lost his job as a producer selling commercial printing after 30 years with the same company. Louise says, “It was terrifying; we went from a very livable income to nothing in a matter of minutes.” Fortunately, as a stay-at-home mom, Louise had set up a lighting business several years before Gary’s job loss. “Gary joined me and we expanded my little business into a very lucrative lighting business. We designed and manufactured the most wonderful, whimsical lighting.”

However, business dwindled, and when seven of their biggest customers filed for bankruptcy, they were left holding the receivables. Louise had never forgotten that map, and with their dwindling business and income, the prospect of moving overseas became a real option.

They briefly considered Mexico but decided that the heat was too much for them. “Texas was hot enough; the last year there we felt like crispy critters,” says Louise. During the summer of 2011, their son-in-law suggested they check out Ecuador, and finally Louise’s map had a pinpoint. She explains, “We are about as boring as they come and are not spur-of-the-moment people, but by November 2011, we had sold our home, closed our business, sold a bunch of our belongings, and we took off to Ecuador. Flying overseas and obtaining a passport was all new to me and I was raring to go.”

They arrived in Manta for a two-month stay having done their homework: they had a checklist and were on the hunt for a new home. Manta is a prosperous port city and has emerged as a major cargo port and beach resort in recent years. With a vibrant nightlife, beautiful beach, and great local restaurants, this area had it all, Louise felt. “I had always wanted to live at the beach, so looking at other areas was not of interest to us.”

With their trip quickly coming to an end, they drove to the fishing village of Crucita.

“We were driving down the malecón and, lo and behold, there was a big ‘for sale’ sign and an expat yelling ‘Come on in and I’ll show you around.’ I fell in love with the condo!”

The interior was not finished, but they called the builder, did the purchase contract the next morning, and left the day after that. Their attorney did the walk-through several times for them, and every item they agreed to had been done.

Louise didn’t experience any “culture shock,” she says. “I was in love with the town, the local people, my condo, the beach, and—believe it or not—the bus.” They also knew they could afford to live here comfortably. “We could afford health care, groceries, dinner out as often as we liked, and gas for our car.”

There is a Saturday market a short walk out of town. You can leave the market with a giant head of broccoli for 80 cents, a bag of apples for 50 cents, a freshly dressed, generously sized chicken for $7.50, fresh tomatoes for $1, and pineapples for 50 cents. “We purchase fresh corvina from a fisherman on the next corner for $4 a pound, huge langoustines for $5 per pound, and we can purchase cleaned crab for $6 to $7, depending on the time of year.”

Crucita has everything you could want in a community, the couple feels. On the street you can catch a bus going to Portoviejo or Manta, and from there you can go anywhere in the country. You can fly to the States from Guayaquil or fly from Manta to Quito. There are many shops, a pharmacy, several doctors, and a soon-to-be-built mini-hospital in the area. There are plenty of activities to keep you busy here, according to Louise. “The restaurants are abundant, a new gringo hangout has opened, you can paraglide or relax on the fantastic beaches, and we will be starting a non-denominational Christian church service soon.”

Louise says that you can be as involved or as quiet as you like in Crucita. “Our group of friends is the kind you can call on if you need help, and they beat down the door to see who can get there first. We are starting a dining club, we have many card players, a women’s group, and more.”

Get Your Free Ecuador Report