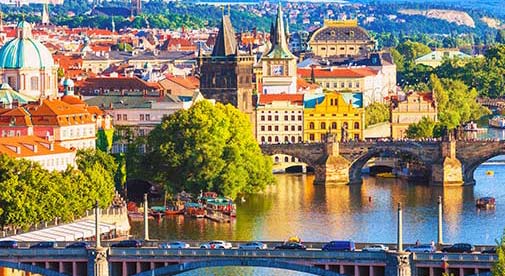 Guide to Prague - A Great European Lifestyle and Center of Culture

In the days after fire devastated Paris’ iconic Notre Dame Cathedral, travel stories flooded the news feed on my phone, rapturously describing all the other Gothic-era churches one might visit in Spain, Germany, and England. Blindingly absent was Our Lady Before Tyn, a Gothic masterpiece, its twin spires defining the skyline of the city I now call home: Prague.

The oversight, I thought, says something about Prague’s place in the media’s consciousness. It’s often a second-thought behind the “traditional” Western European holiday spots. And in similar fashion, it’s an afterthought—if it’s even thought of at all—as a place to consider spending one’s retirement, or at least a part of it.

Unlike so much of urban Europe, Prague is 100% authentic. The city was essentially undamaged by World War II and, thus, the streets are crammed with buildings that span the entirety of the architectural movements in Europe over the last thousand years—Romanesque, Gothic, Renaissance, and Baroque, up through Cubism, Stalinist, and Post-1989. The Prague Castle complex, standing sentinel on a hill overlooking the city, is the largest in the world. As such, UNESCO has named Prague’s entire Old Town as a World Heritage site.

And yet, Prague isn’t just some kind of architectural Disneyland. It is an increasingly modern city, with all the creature comforts of Anytown USA. It’s home to a diverse food scene, a high standard of living, high-quality healthcare, an expansive arts culture, parks big and small, and endless opportunities for walking and exploring. And, best of it, Prague offers an affordable lifestyle.

For those reasons, a city that’s already home to more than 120,000 expats is also collecting retirees who want something other than palm fronds and sand between their toes every day.

I have conversations about Prague regularly with friends in Europe and back home in the U.S. There remains a perception that Prague is too “eastern Europe”—a short-hand way of saying it’s still under-developed because of Czechoslovakia’s half century as a totalitarian, communist state. What they’re saying is, “Prague sounds exotic to visit, but who would live there?”

Second, Prague is as modern and convenient as much of Western Europe. Yes, this was a communist state for much of the last half of the 20th century. But communism died in 1989, and in the intervening three decades, Prague has refashioned itself into a modern version of its Bohemian past—a leading center for arts and entertainment.

Because it’s in the middle of Europe, Prague’s climate is continental, meaning hot summers and cold winters. That said, winter rarely blasts Prague with lots of snow. It does snow a few times a year, and it’s usually gone by the next day. And though the weather does get cold, days and night are not often miserable.

Also because of its location, Prague is a superb base from which to explore all of Europe, the Middle East and North Africa. Literally within a few hours on a direct flight, you can be in the Hermitage in St. Petersburg, Russia; shopping the high streets of London; bargaining in a Moroccan souk; or touring the vineyards of Lebanon. And trains are equally convenient and cheap, like $30 or less—to places such as Vienna, various parts of Germany, and into Poland and Slovakia.

Need medical care? You’re in good hands. The Czech healthcare system is widely regarded as one of the best in Europe. It has even emerged as a destination for medical tourism because the quality of care is so high, and the cost so affordable. Health insurance is compulsory is you live here, and I opted for the national plan because everything is basically free, and the doctors are Western-trained and usually speak English. My cost: $97 a month.

But even if you had to pay for services, the prices are affordable. I visited the dentist for a wisdom tooth issue. It cost me less than $40. The dentist told me that if he’d had to extract that tooth it would have been about $80.

For millennia it was a center of trade in Central Europe, a center for the arts, and a center of religion. Today, it attracts expats because the lifestyle is so agreeable.

First, there’s the food and drink. The Czech Republic is the undisputed beer capital of the world. Czechs drink more beer per capita than anyone—and by a country mile. (The Germans, widely thought of as beer-consuming giants, don’t even crack the top three). That means the beer here is immensely good and uniquely varied… sour beers, fruit beers, dark beers. In restaurants you’ll pay just over $1 or $2 for some excellent brews that play well with food.

The Czech cuisine, itself, is heavy on fried and roasted/grilled meats (think: pork), root vegetables and dumplings in many different ways—and, honestly, it’s all really tasty. There’s little on a winter’s day quite as satisfying as a plump sausage, strait off the grill, wrapped in a fresh, crunchy baguette, and slathered in mustard, with a side of halushky (potatoes, bacon, and sauerkraut cohabitating an open marriage of tangy, robust flavors).

But Prague is more than its Germano-Slavic staples. The city is overrun with great sushi, Italian, Indian, Mexican, and anything else you might crave. And oddly, it’s home to top notch Vietnamese food, a throwback to its communist past, when Vietnamese flocked here and stayed, bringing with them the flavors of home.

And the costs will keep a miser ecstatic. Though you can obviously find expensive, high-end meals all over the city, a good, filling, Czech meal at a local pub, with beer, will set you back about $8.

Prague has always been a center of culture. Mozart was a huge fan of the city, and first performed his Don Giovanni opera here. Culture, in fact, is the reason the city wasn’t destroyed in World War II. Hitler wanted to preserve Prague as the cultural hub of a unified Nazi Europe.

Today, the art scene is robust. Opera, theater, dance, concerts… they’re every. As well, museums are all over the place—everything from the National Gallery to specialty museums such dedicated to the KGB, Communism, Kafka, and so many more.

Cost of Living in Prague

Apartments, often housed inside buildings that back a century or more, are as modern as you could want: high-speed Internet faster than in the States and substantially cheaper; modern kitchens with modern appliances; air-conditioning (though not always), and radiant heat for winter. Almost all the apartment buildings stand shoulder to shoulder on the streets, protecting quiet, often green interior courtyards from the din of city life.

To say there’s an epicenter to life in Prague is hard. In theory, one might argue that it’s the one-and-a-half mile stretch that runs from Wenceslas Square, through Old Town Square and across the Charles Bridge to Prague Castle. That’s Prague 1, the heart of Tourist Prague, and tourists arrive like hordes of locust throughout the year, save for January and February, to lay claim to that patch of city.

For anyone who likes to be in the heart of that kind of action, an abundance of apartments are available, but you pay for the neighborhood. A 4,843-square foot, two-room apartment (done up very nicely) is in the $275,000 range.

But outside of the city center, Prague’s different districts have their own distinct feel and often much-cheaper costs. Prague 2, for instance, is hip and urbane, with tree-lined streets and parks, loaded with restaurants, beer halls, and unending shopping. For the same $275,000 or even slightly less you can find an equally nice apartment of 6,458 square foot or more.

Prague 3 is a revitalization project in full swing as 50- and 60-year-old Communist-era buildings are turned into ultra-modern apartments. A similarly nice, 600-square foot apartment is about $260,000. Prague 8, an eclectic mishmash of old and uber-new that borders Prague 1, has largely been rebuilt after devastating floods in 2002. Prices here for a nice 600-square foot apartment are similar to Prague 3.

For those who would don’t want the hassles of owning, rents across all the districts where expats tend to congregate vey widely. But you can expect to pay about $650 a month for a very nice, unfurnished apartment of about 6,458 square foot, up to about $1,700 for a top-of-line, 700-square-foot furnished apartment in the center of the city.

Don’t worry about being removed from the action if you’re outside of Prague 1.

Prague is a very small “big city” well-connected by a spider web of metro, bus, and tram stops. My apartment is on the border of Prague 2 and 3, home to hipsters and new families and white-collar workers. It’s a leafy area packed with coffee shops, burger bars, and Vietnamese restaurants, and willed with parks and an abundance of shopping… and I’m a 12-minute walk to the center of Prague along beautiful, old streets. Or, I’m two metro stops away—and a 5-month transit pass offering access to any type of public transport—subway, bus, tram, and local trains, even the funicular that traverses picturesque Petrin Hill—is just $105.

For a European capital, Prague represents a great lifestyle at a great value.

Here’s a look at what you can generally expect to spend in a month to call Prague home:

Prague is a wonderful city to call home. You’re close to so much in terms of weekend getaways or longer trips. The lifestyle is relaxing. The city is eye-candy pretty much everywhere you go. The food is great. The transportation is cheap and convenient and gets you around anywhere you might want to go—including the airport.

With such a huge arts scene and so many museums and walking tours that recount Prague’s 1,000-plus years of history there is always something interesting to do. Perhaps the only thing missing is a beach.