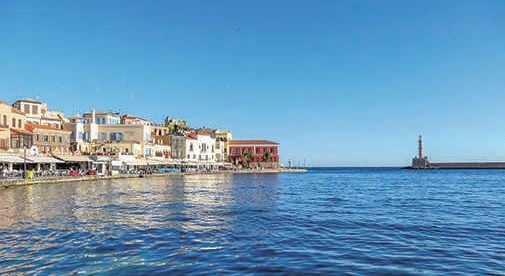 Chania on the Greek island of Crete is just one of the locations Greece’s new visa covers.

The Aegean sun tore into me. I was hot. I needed to write. I seriously craved the iciest of beers. I turned the corner, lost in the warren of alleyways in old-town Chania, on the Greek island of Crete, to find that Dionysus and Hermes (the Greek gods of drink and writing) had smiled upon me. Or, maybe it was just luck. Either way, there on the corner I saw Mamouth Bar. It was everything I wanted in my life right then: a small, quintessentially local pub, untouristed, where I could sit and write for a while.

And, so, there I sat—a digital nomad doing his digital nomad-y thing—for a couple hours. I downed a couple of very frosty Alfa beers, met my writing deadline, and then relaxed in the afterglow of work, content with a life earning my keep from anywhere in the world. At that exact moment, there was no better place I could think to be.

Now, Crete, other Greek isles, and the country as a whole are looking to attract a lot more people like me—digital nomads who can live and work from anywhere in the world they find a decent WiFi connection. And the Greeks are doing so with a plan that, once it comes to fruition, will be the best digital nomad visa I’ve seen so far.

Over the last year of the global pandemic, various countries have unveiled “digital nomad visas.” These are designed to attract remote workers by providing them the legal cover they need to live and work in some place for longer than a few months, yet without having to apply for the full-blown residence visa that would otherwise be necessary. It’s an attempt to hoover up tourism dollars at a time when tourism has collapsed because of travel restrictions.

They’re aiming to play off one of the biggest side-effects of the pandemic: A reordering of the workforce.

No longer must workers confine themselves to cubicle farms from 9 to 5. Many, many companies now allow workers to work remotely. And a lot of workers have realized that they thrive on the improved work-life balance they can achieve by avoiding all those wasted hours commuting. Many get to work to a schedule that better fits their life. So, even before we consider the benefits of working from a new location, workers are choosing to pursue a remote-worker lifestyle.

And then there are the older workers who lost jobs during the pandemic and have decided to turn distress into opportunity. They’re creating new, online careers for themselves—as writers, designers, consultants, and so much more. Some of them are choosing to live globally for a while. Digital nomad visas make that possible.

Alas, most of these new breed of nomad-centric visas aren’t so great.

First, some are quite pricey in terms of the application cost—upward of several thousand dollars.

Others require that you prove you have an employer and that you earn a rather hefty income. The United Arab Emirates, for example, require proof that you earn $5,000 or more in monthly income. The Cayman Islands government demands that you earn $100,000 annually as a single person;$150,000 as a couple. Some people will meet those requirements; others won’t.

Worse, from my perspective, is that many of these digital-nomad visas allow you to live locally for only a year. Then you’re gone. Now, if you want only a single year abroad—a sabbatical—then a one-year visa is fine, assuming you don’t mind the costs involved.

What if, however, you realize how much you love overseas living? What if you don’t want to go home and, instead, you want to continue living your life abroad?

You’re out of luck.

Now you have to start all over in some other location, pursuing a traditional, long-term residence visa. That’s more time and more money, when you could have just chosen a standard long-term residence visa in the first place. It’s often cheaper, and after a year (when it expires) you can either return home or renew your visa for another year or two at minimal cost. Then, you can renew it again, ultimately reaching the point where you can apply for permanent residency, citizenship, even a passport if that’s your goal.

Which is where Greece’s proposed digital nomad visa stands apart.

Late last year, the Greek parliament introduced new legislation to create a visa that gives you more time abroad and, when you read between the lines, is effectively a way to build a new life in Europe permanently.

The visa is still under development as I write this, but Greece seems to be moving full speed ahead with a plan that will look something like this.

Applicants for the Digital Nomad Visa in Greece must:

Not have been a tax resident of Greece in five of the last six years.

Be a tax resident of the European Union or a handful of other non-EU countries, including the U.S. and Canada.

Provide their services in Greece.

Agree to live in Greece for at least two years.

It’s that last one that really fuels my interest. Most countries offering digital nomad visas kick you out after a year.

Greece is giving you two years in-country right off the bat.

But it gets better.

One of the benefits of the Greek proposal would provide for a sharply reduced tax rate for seven years so that digerati workers would pay taxes at just half their normal rate on the income they earn in Greece. At the highest level, that would cut the current 44% rate to just 22% on earnings over €40,000 per year (about $48,000). But read between the lines and that’s where you find the most interesting element of the Greek plan: Why would a two-year visa offer seven years of tax benefits?

Because the visa will very likely be renewable.

Though Greek officials haven’t explicitly stated that just yet, it’s the only rationale that makes sense. All the Greek commentary on this topic explicitly highlights those seven years of reduced taxes.

Which means Greece’s digital nomad visa becomes one of the most appealing of such visas in all of Europe. Why? Because, conveniently, after seven years a non-Greek is eligible to apply for Greek residency and citizenship. That comes with a Greek passport, which is a European Union passport. And a European Union passport grants you unfettered, visa-free mobility to live and work anywhere in the European Union (if you happen to tire of an Aegean lifestyle).

But even as the country’s government works out the details on a larger scale, several localities already have campaigns in place to attract digital nomads.

This past spring, Crete launched the first website in Greece specifically aimed at digital nomads (See: Workfromcrete.gr). It mostly promotes the national digital nomad agenda, but from a Cretan point of view of working “remotely from paradise.”

Having spent 10 days traveling through Crete on assignment in 2019,I can tell you it has a warm, laidback lifestyle, punctuated by fabulously fresh food (especially seafood), superb Cretan wines, and Aegean sunsets that make you want to stop working every evening just to sit on the beach and chill.

Athens, meanwhile, recently launched the #BetterInAthens campaign that highlights the lifestyles of digital nomads from around the world who have relocated to the boisterous Greek capital. And Astypalaia, a butterfly-shaped island in the Dodecanese group, northeast of Crete, is pushing development plans that aim to make the island “a desired place of residence” for people who want to live and work remotely.

The big question: Is Greece right for you?

If you’re a sun and sand person—absolutely. Love the sea? Greece will spoil you. Food and wine? Seriously, some of the best on the planet. Culture? I mean—it’s Greece! Ancient history, mythology, birthplace of democracy, etc. etc.

Of course, those are just lifestyle issues. You also have to consider the daily practicalities. And it’s there where you have to pay attention. When it comes to Greece, in particular, you don’t just tell yourself “I love X” and decide that’s where you’re moving.

Compared to the U.S. and Western Europe, Greece is definitely affordable. But it does depend on where you choose to live and the kind of apartment you rent. Mykonos and Santorini—both huge tourist draws—are definitely more expensive than many parts of Crete, for instance. Apartments in Athens can get downright pricey. Same with Rhodes.

Also, there are transportation issues to consider if you decide you want a quiet life on an island. During the winter, when tourist season dies away, ferries run on a much less frequent schedule. In rough weather, they can stop running altogether for days at a time. Many of those islands don’t have airports, so you’re dependent on the ferries.

On some of the smaller islands, you will find infrastructure challenges, including lack of banking, shopping, and dining options. In other destinations, winter can see pretty much everything shut down but the bare basics. And quality WiFi—a must for any digital nomad— is spotty in many locations.

All of those should be on your checklist of necessities, if chasing a Greek digital nomad visa appeals to you.

That said, the Greek digital nomad visa is a winner among the world’s nomadic visa options. It offers the longest period of initial residency. It comes with a significant tax break. And, if my reading between the lines is on target, it’s going to offer a path to permanent residency—and an EU passport—for those wanting to settle into a European lifestyle.

7 Steps to Becoming a Digital Nomad

Expat vs. Digital Nomad: Which Lifestyle is Right for You?