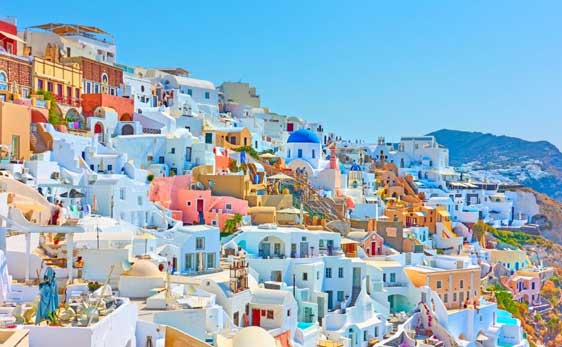 From the Ionian Sea, the Aegean Sea, and the Mediterranean Sea, you could spend years island hopping and exploring without ever getting bored. Even within island clusters, each place has its own personality, unique character, and signature charm. Below we offer you a guide to the Greek islands, highlighting some of the major islands you might want to visit either for a holiday or when scouting out a new home.

Apart from the two largest islands of Crete and Evia, the Greek islands are grouped into six clusters:

To the west in the Ionian Sea, are the islands of Corfu, Zakynthos, Kefalonia, Lefkada, Paxi, and Kythira.

For an easy day or weekend trip from Athens, the Argo-Saronic islands including Aegina, Hydra, Poros, Spetses, Salamis, and Agistri are ideal options.

In the northeast Aegean Sea near the coast of Turkey, you’ll find the islands of Lesvos, Samos, Limnos, Chios, Samothrace, and Ikaria.

Located in the northeast in the Aegean Sea, you’ll find the Sporades islands including Skiathos, Skyros, Skopelos, and Alonissos.

In the eastern Mediterranean Sea below the North Aegean island cluster, you’ll find the Dodecanese islands, including the islands of Rhodes, Kos, Kalymnos, Patmos, Kastellorizo, and Symi.

If you are looking for an island that will hold your attention for months on end, Crete is a great choice. The biggest island in Greece and the 88th biggest island in the world, Crete has world-famous beaches, stunning mountains and gorges, a colorful history ranging from ancient Greek mythology (the Minotaur and the Labyrinth) to the famous Cretan resistance to the Nazis in World War II. Crete offers larger cities like Heraklion, Chania, and Rethymno, as well as tiny villages both in the mountains and by the sea. Featuring three airports, it is one of the only Greek islands that can support itself independently without tourism. It offers world-class attractions like the Palace of Knossos and Elafonisi pink-sanded beach. If you haven’t been to Crete, it is worth a visit.

Evia is the second largest island in Greece but because it is connected to the mainland by so many bridges and short ferry rides, it can be easy to forget it is an island. It’s easily accessible from Athens and features both gorgeous beaches and magical forests. Coming in at 1,422 square miles and the home of just under 200,000 people, it is known for its conference centers and luxury accommodations.

We’ve listed just 23 of the dozens of colorful, unique islands you’ll find in Greece. From popular to remote, from polished to raw and rugged, there really is something for everyone within the Greek islands. And whether you are seeking a relaxing holiday or a brand-new life, Greece has a way of meeting you just where you are and giving you just what you need.