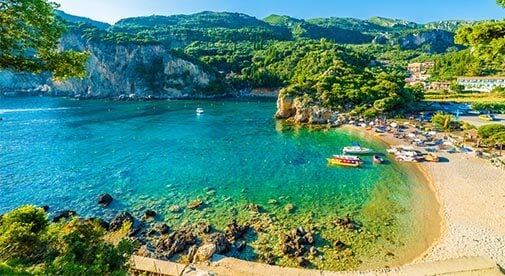 Whenever I mention I live in Greece, people get a faraway look in their eyes and often share with me that they had a really amazing Greek holiday at some point in their past. They tell me about island hopping after college, a Santorini hotel they stayed at for their honeymoon, or a Cretan village they visited during a summer break. I’ve never met someone who reported a bad holiday in Greece and, in fact, some people admit to me that they dream of retiring to a Greek island…

It’s a dream I encourage—I’ve lived here for eight years, and I truly believe Greece is one of the best places on Earth. But I also raise a flag of caution. Why? Because living on a Greek island year-round is a very different experience than visiting for a few weeks or even months in the summer. People get confused and think their summer experience will carry over into the offseason. But if you talk with the locals, they will explain to you that life on most Greek islands is very difficult during the months of November through March. Eighty percent of businesses close leaving the islands with a desolate, empty feeling. For some people, this seems like an image worth romanticizing but the blush comes off when the grocery stores are shut, the repairs shops are boarded up, medical help is scarce, and the restaurants are quiet.

If you dream of island living, it’s worth careful consideration. But that doesn’t mean it’s not possible because there are a few Greek islands that are fully inhabited all year-round. These islands are diverse, ranging from large to small and spanning locations in the west near Italy to the east close to Turkey. Let’s explore some of them.

It’s almost not fair to call Crete an island as it clocks in at 3,260 square miles in size making it the 88th largest island in the world. It is about the size of the state of Delaware, although if you are looking for U.S. comparisons, it is more culturally similar to Texas. Crete has its own distinct dialect, and most natives identify themselves first as Cretan and secondly as Greek. Gun ownership is prolific, and Cretan weddings are famous for the tradition of shooting guns into the air as part of the celebration. Cretans have a tough, anti-authority, no-nonsense style that is mirrored by the island’s geography. The island is mostly mountainous with soaring peaks, deep ravines, lakes, and gorges.

Popular attractions include the Elafonisi Beach with its signature pastel pink sands, the Samaria Gorge, a 10-mile hiking area that became a national park in 1962, and the palace of Knossos, the ancient Minoan ruins that have been referred to as Europe’s oldest city. The palace of Knossos is also where the mythological tale of Theseus and the Minotaur is said to have taken place.

Whether you seek natural beauty, ancient ruins, or vibrant city living, Crete is one of your best choices for year-round living. With a population of over 630,000, the island is fully functional 12 months a year. The largest city is Heraklion with a population over 200,000 and because the island is so big, it has three airports and an effective, functional medical infrastructure. Crete is one of the only Greek islands that can support itself independently without tourism.

While impressive in many ways, there are some drawbacks to life in Crete. Winter is cold, and if you are looking for international cuisine and modern culture, you are likely to be disappointed unless you live in one of the big cities. That said, if you are looking for a traditional Greek experience, Crete is a great choice as a year-round island.

If you are seeking a smaller, more low-profile, culturally diverse island, Siros, about 78 nautical miles from Athens, is worth considering. It is the administrative capital of an island group called the Cyclades and because of this, it stays open and fully functioning 12 months a year. While you are likely more familiar with the marquee islands of the Cyclades like Mykonos, Santorini, Paros, and Naxos, Siros is important in its own right with a year-round population of over 20,000 people inhabiting its 39 square mile landmass.

The island is known for its culture, and you can easily find quality art openings, film festivals, fine dining, and theatre in Siros. The architecture has a bit of a northern European feel to it with cobblestone streets and neoclassical mansions tucked against narrow, winding alleys. It’s not known for its beaches but with Mykonos a short ferry ride away, Siros gives you good proximity to everything you imagine when you hear “Greek island.” Plenty of Athenians maintain a dual residence in Siros, and the island has a cultivated, broad-minded feel. If you are a culture enthusiast seeking island living with easy access to mainland Greece, consider Siros.

3. Have a Taste of Italy in Corfu

Located in the Ionian Sea with close proximity to Italy, Corfu is another good year-round living possibility. It is a mid-sized island with a landmass of 236 square miles and a population of over 100,000. Corfu was under Venetian rule for hundreds of years, and the island has a distinctly Italian feel and influence. Pasta restaurants are almost equal in number to Greek tavernas, and limoncello is just as popular a drink as the traditional Greek ouzo. While the island is highly dependent on tourism, Corfu has a developing agricultural economy including the export of olive oil, the production of specialty cheeses, and the cultivation of exotic fruits like the kumquat and bergamot oranges. Famous sites in Corfu include the UNESCO World Heritage-listed Old Town of Corfu City, at the center of the island, and Angelokastro, a Byzantine castle located at the top of the highest peak of the island’s shoreline.

Despite being a year-round island, you’ll notice a difference in Corfu during the offseason months. The villages in the interior of the island can feel a bit empty, and the weather becomes wet and cold. But while the smaller towns and villages start to feel desolate, Corfu City remains lively and vibrant. Beloved local restaurants stay open in winter with fireplaces blazing and good Greek red wine for drinking.

4. Indulge Your Medieval Side in Rhodes

On the eastern side of Greece, about 365 nautical miles from Turkey, Rhodes is another year-round Greek island. Like Siros, this is a capital island, serving as the administrative center of the Dodecanese island cluster. The island’s 530 square supports a year-round population of over 115,000. Rhodes’ claim to fame is the Colossus of Rhodes, a now fallen statue of the Greek god Helios that was named one of the Seven Wonders of the Ancient World. While the statue is gone, the walled fortress of medieval Rhodes remains, and many of the island’s villages have their own medieval castles. Rhodes Town is the principal city on the island and is lively and active year-round. Though quieter during the winter, the interior of the island has some lovely villages and fantastic scenery. Like Crete, Rhodes offers a lot of natural diversity. Including Rodini Park located just outside Rhodes Town which is one of the oldest parks in the world.The Rhododendron racemosum or rock-rose in Rhodes is so prolific the island has been nicknamed the “Island of Roses.”

If you dream of living full time on a Greek island, these are your safest bets. But if your dream is centered on living on a small Greek island, don’t give up hope. You can adopt the lifestyle of many Greeks by spending six months on an island and six months on the mainland. Unlike North America and most of Europe, Greek life is very focused on the summer, and the rhythm of the country reflects this. It is very normal to spend the summer season on an island and then relocate to Athens or somewhere else in the mainland for the winter period. The summer season traditionally starts with Greek Orthodox Easter and runs to mid-October. Athens offers a surprising array of modern culture and while the capital of Greece is very sleepy in August, it wakes back up during September and October. In Athens, during the winter you can find excellent theatre, dining, art openings, lectures, and more.

Whether you want to live on one island year-round or have the flexibility a mainland/island lifestyle offers, Greece has a way of accommodating you. It is part of the cultural “philoxenia,” a uniquely Greek word that means “love of strangers and eagerness to show hospitality.”

The 5 Most Picturesque Greek Islands