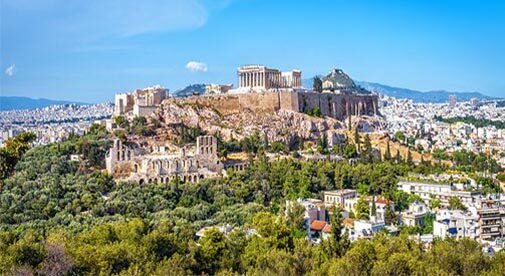 Expat Lynn has made her home in Athens since 2012. ©iStock/scaliger

When I moved from San Francisco, California, to Athens, Greece, in 2012, I didn’t come for economic reasons. The move was purely intuitive. After 15 years of living in San Francisco and working as a Certified Public Accountant, something deep inside me wanted to be in Athens. And so I came with my dog, my two cats, and one suitcase.

In the years since, Greece has been good to me, and I could spend hours listing all the things I love about my adopted country: the genuine warmth of the people, the fact it gets over 250 days of sunshine a year, the mountains of Meteora, the beaches of Milos, seaside fish tavernas with grilled octopus and tsipouro (a brandy from Crete), the Greek language that has eight different words for love, the list goes on…

There’s also the more practical elements of life here. Because the cost of living is so much lower than most of the U.S., you can live very well. I was able to quit my work in the finance field to become a full-time writer and yoga instructor. If you want a life change, Greece just might be your place.

One of the first things I noticed is that the cost of housing in Greece is relatively low. You can easily rent a respectable apartment in the heart of the capital, Athens, for less than $650 per month. If you want to put down roots or even buy investment properties, that’s an option too.

Since moving here, I’ve purchased and renovated two apartments near the Acropolis and put them on Airbnb to earn extra income. My first purchase was a 269-square-foot apartment for €28,000 (about $31,000). And I went on to buy a second, bigger apartment for even less. You can get great real estate deals in Greece if you know where to look, and expats can easily buy property here as long as they follow a few administrative steps.

If you are considering a move away from the U.S., one of your considerations will be healthcare. I’ve been impressed by Greek medical care. There are plenty of extremely highly-qualified doctors who speak fluent English and have often been trained in the U.S. or U.K. The Greek medical community is sophisticated, and the country has become a destination for medical tourism too. Because healthcare is largely socialized, you can get plenty of routine or more specific treatments for a fraction of the cost you would pay back home.

Last summer I had to go to the doctor for an eye infection. I went for an eye exam and was given a prescription for antibacterial cream. The cost for the visit? Zero. Healthcare in public hospitals is free for Greeks and expats alike. The administrator looked confused when I asked where to pay. The cost of the prescription? Four dollars.

Greek doctors are also kind. This eye infection happened days before I was supposed to do my duties as godmother at a baptism. When I explained the situation, the doctor looked at me directly and said, “That’s an important day. I think the swelling will be gone by then. Don’t worry!” I actually feel much more secure about my healthcare future since moving to Greece.

The lower cost of living extends to all parts of life. In the eight years I’ve lived in Greece, I haven’t had a car because I haven’t needed one. I live in the center of Athens where I can walk most places, but when I do need to take a taxi, they are easy to hail and cheap to ride in. The minimum fare is under $4 with a standard rate of about $1.30 per mile. I easily get across town for under $10. It’s much cheaper than my life in San Francisco where taxis have a standard rate of about $3 per mile.

If you are concerned you’ll be cheated by a taxi driver, don’t be. The free app, Beat, is widely used and acts like Uber, allowing you to hail, track, and rate your taxi ride.

And if you are wondering if you will miss out on art and culture in Greece, don’t worry. You won’t. The Basil and Elise Goulandris Modern Art Museum in Athens offers a yearly membership for $65 so you can go as often as you want to see their five floors of impressively diverse modern art. The Stavros Niarchos Foundation Cultural Center offers all types of free events including theatre, live music, and films. My favorite time to visit is during the holidays when they offer a colorful sound and light show on their pavilion.

The economic scale of Greece compared to the U.S. can be so different, it’s almost confusing. It took a dinner with a group of friends, who all work as electricians in Greece, for it to really hit home. When the bill of €40 ($44) for the four of us came, I started to leave a €5 tip. My friend, Dionysis, looked at me in horror.

“Do you understand that most of this country lives on less than €900 per month? There is no need to leave a €5 tip!”

Thanks Dionysis—I’ve got it now.