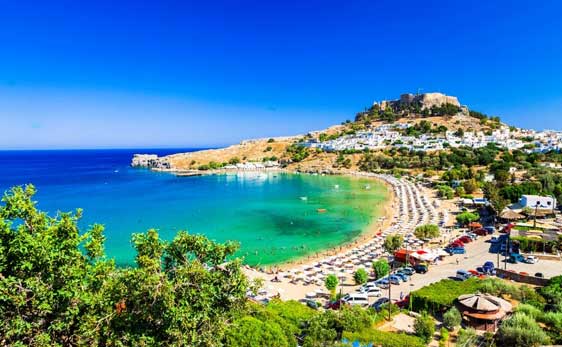 A Guide to Rhodes: The Island of Knights

In the Aegean Sea near the coast of Turkey, Rhodes is the largest island in the Dodecanese island cluster and a popular tourist destination, welcoming over 2 million visitors in a typical year. With a landmass of 541 square miles and over 115,000 full-time residents, it’s an active island all year round making it a good choice for full-time living.

Rhodes has a unique character, and beyond its beautiful beaches, the UNESCO-recognized Old Town, and its impressive natural beauty, the island has a distinctly medieval feel. Nicknamed “The Island of Knights,” it was headquarters to the Knights Hospitaller, an ancient Catholic military order, from 1310 until 1522. You’ll see influences of the middle ages throughout the island, giving it a regal feel.

How to Get to Rhodes

Rhodes has an international airport (airport code RHO) named “Diagoras” after the famous 5th-century Greek boxer known for his victories and those of his offspring. The flight from Athens takes less than one hour, and the airport has charter flights from many European cities.

If you prefer ferry travel, there are one to two daily ferry crossings from Piraeus Port in Athens to Rhodes all year round. Because Rhodes is so far to the east, the journey takes between 12 to 24 hours, depending on the vessel and itinerary. Check for overnight sleeping cabin options.

When to Visit Rhodes

Like all Greek islands, Rhodes is most active during the summer season, beginning on Greek Orthodox Easter and ending in October. During these months, you can expect to take advantage of the beach resorts, seaside restaurants, shopping, and other activities geared toward visitors. In the winter months, the island is still active, albeit at a slower pace and with fewer options. You’ll also experience a more local vibe and lower prices, so offseason travel has its benefits.

Rhodes is a large island, so if you plan to sightsee outside of the area you stay in, you’ll need transportation. You can rent a car, use taxis, or use the island’s bus system. If you use a taxi, be sure to ask about the price upfront. Island taxis often don’t use meters and will offer you set prices depending on where you need to go.

Four Things to See and Do in Rhodes

1. Stroll Up the Street of Knights to the Palace of the Grand Masters

To see the Palace of the Grand Masters, walk up the Street of Knights, the most famous road in Rhodes that has been restored to look much like it did in the middle ages. In ancient times this road was lined with inns for the seven different factions of the Knights Hospitaller, each representing a different language. Today, the building facades are decorated to reflect each respective country, making for a colorful and interesting walk.

At the top of the Street of Knights, you’ll find the Palace of Grand Masters, a Byzantine structure that served as a citadel, a fortress, and a command center before it was turned into a museum in 1947. With over 150 rooms, the palace is huge, but today fewer than 25 of these rooms are open to the public. In addition to the period piece furniture, vases, and frescos you’ll find, be sure to look for the Medusa Mosaic, a tile floor mosaic featuring the head of the Gorgon Medusa complete with curly hair ringed by four snakes.

2. Visit the Lindos Acropolis and the Acropolis of Rhodes

The word “acropolis” literally means ”high city,” and this name typically signifies a lookout point over the city. A visit to Rhodes will offer you not one but two acropolis views.

The Lindos Acropolis sits over the town of Lindos, a former fishing village known for its beautiful, long sandy beach on the east coast of Rhodes. The Lindos Acropolis has several levels and includes the Temple of Athena Lindia, the Byzantine chapel of Saint John, and an impressive 20-column walkway. Beyond the Acropolis is an archaeological site including a theater, an ancient cemetery, and more. You’ll appreciate the views of the surrounding harbor juxtaposed against the ancient ruins.

Less than two miles from Rhodes Town lies the Acropolis of Rhodes, a lookout point and series of ancient ruins dating back between the third and fifth century B.C. This site includes the Temple of Apollo as well as an ancient stadium and a theater. Although the site of the Acropolis of Rhodes is much smaller in scale than the Lindos Acropolis, it is worth a visit for the stunning views.

3. Beach Hop Around the Island

With over 40 world-class beaches, be sure to spend some time at the sea during your visit to Rhodes. Beaches in Rhodes are a popular attraction, and they can get crowded from June to September, so arrive early to get a sunbed. A few great choices include:

Rhodes is one of the few islands in Greece where you can castle hop. The island has five castles located all over the island, offering you a great opportunity to explore while taking in a bit of history.

If knights, castles, fortresses, and cathedrals capture your imagination, Rhodes is the island for you. It weaves together medieval history with Greek mythology in a unique way allowing you to visit a castle, see a temple dedicated to a Greek goddess, and take a dip in a blue-flag beach, all on the same day.