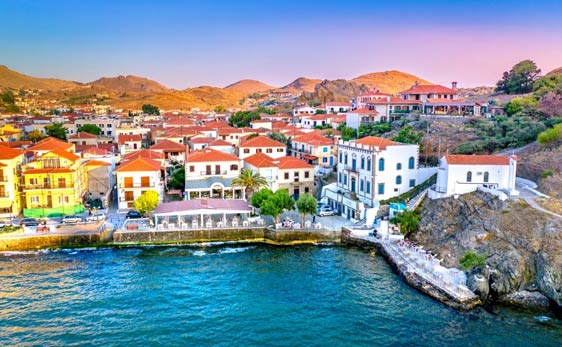 A Guide to Lemnos, the Adventure Island of Greece

If traveling a bit off-the-beaten-path is your style, check out the island of Lemnos, located on the North Aegean Sea near the coast of Turkey. Here you will find natural wonders like a mini-Sahara Desert, a shimmering salt lake, lunar-looking volcanic rock formations as well as pristine Blue Flag beaches, innovative gastronomic dining, and a low-key, authentically Greek vibe.

In Greek mythology, Lemnos was the location of the forge of Hephaestus, the god of metallurgy, blacksmiths, and fire. The island is also thought to be where Dionysis took Ariadne after Theseus abandoned her on Naxos.

In ancient times, Lemnos was a member of the Delian League ruled by Athens. In the 4th century, the island came under Byzantine rule, but in 1204, the Venetians took possession. During the centuries that followed, the island was controlled by Venice, Genoa, and the Turks. Lemnos joined the Greek kingdom after the Balkan Wars in 1912 to 1913. Today the island has a strong military presence, including a military air base near the Lemnos airport.

Despite its off-the-beaten-track vibe, Lemnos is the eighth biggest island in Greece. It lies in the North Aegean island cluster and to the north of the island of Lesvos. The island has an international airport (airport code: LXS) and several ports, including the main port located in the capital city of Myrina. From greater Athens, you can take a nine-and-a-half -hour ferry ride from the port of Lavrio, or a 22+ hour ferry ride from Athens’ main port of Piraeus. A flight from Athens takes less than an hour.

With a landmass of 184-square miles, Lemnos is a big island, so renting a car is generally considered the best way to get around. That said, the island is not overly focused on tourism, and driving isn’t for the inexperienced or faint of heart. Many of the roads to the popular attractions, like the sand dunes of Pachies Ammoudies, are dirt or poorly paved roads with limited signage. But if you have a taste for adventure, you’ll be rewarded with relatively small crowds and spectacular scenery.

When to Go to Lemnos

The high season of early June to late September is the ideal time to experience the most this island has to offer. Expect raw nature, manageable crowds, tiny, unassuming villages, unspoilt beaches, and arid, barren stretches of land throughout the island.

6 Things to See and Do in Lemnos

1. Savor a Sunset at the Sand Dunes of Pachies Ammoudies

Pachies Ammoudies, or the Lemnos Desert, is considered to be the only desert in Europe, and these sand dunes in the north west of the island are one of the top attractions. Spread over an area of about 17 acres, the dunes offer an impressive change from the usual beaches and hills you typically see in Greece. The road to the site adds to the experience. You’ll feel like you are on safari getting there. You don’t need an off-road vehicle but don’t expect paved roads or clear signage. The trip is worth the effort as the site is quite distinct. Sunset is a perfect time to go because there is very little shade in the area, and the temperatures soar during the day.

Lemnos boasts five Blue Flag beaches, the international Foundation for Environmental Education designation of excellence. The beaches of Thanos, Platys, Agios Ioannis, Richa Nera, and Evgatis-Zematas offer visitors sparkling water, clean facilities, and a sustainable natural environment. Thanos, in particular, is a great option as it has several organized beach clubs, an outstanding fish taverna called Giannakaros, and a place to rent water sport equipment. Platys is another great choice with a glimmering sea and organized sunbeds. When you get tired of sandy beaches, head to the rockier Agios Ioannis beach for a relaxing swim. The Blue Flag beaches are in the south west part of the island, and you can easily visit several of these beaches in a single day.

Beyond the Blue Flag beaches, Lemnos offers a number of secret coves and hidden spots. Visit the Cave of the Seal, a short walk from the beaches of Mikro and Megalo Fanaraki. Follow the dirt path and hike down the rocks to arrive at a natural arch that offers picturesque views and raw, unspoilt nature.

3. Hike Up to the Myrina Castle

The fortress of Myrina is a Byzantine castle that was reconstructed by the Venetians in the 13th century. Towering over the capital city of Myrina, it is the largest castle in the Aegean. An impressive site, the castle covers roughly 144,000 square meters and has 14 towers. From the Myrina seaside, look up and follow the winding steps to enter the free site.  Because the area is so large, give yourself time to explore, and visit early or late in the day to avoid the brutal heat of the sun. You can easily spend an hour hiking around the grounds taking in beautiful views and striking images.

After leaving the fortress, be sure to pass through the Central Market of Myrina, where you’ll find a wide array of cafes, restaurants, and retail stores.

4. Stroll Across the Aliki Salt Lake

In the summer months, the Aliki Salt Lake on the north east coast of the island dries up and forms an expansive salt flat. Surrounded by sand dunes and marshlands, this shimmering white stretch of land offers visitors an impressive moonscape-looking setting. Head to the Salt Lake for a stroll and then drop into Aliki Beach to watch the kiteboarders and windsurfers at one of the windiest beaches in Lemnos.

5. Explore the Volcanic Rock Formations at the Faraklou Geological Park

6. Go Back in Time at the Archaeological Site Poliochni

Located on the east coast of the island, Poliochni is believed to be one of the most ancient towns in Europe, dating back to the Aegean Bronze Age. The site was discovered in the 1930s, and today, you can visit the village ruins with partially retained walls showing how the houses were closely huddled together. You can also see what is left of Europe’s first Parliament building. Visit this site with a good guide to get a full appreciation of the history.

Where to Eat in Lemnos

Lemnos has a wide spectrum of food choices, and whether you seek traditional Greek taverna fare or a more innovative dining experience, you’ll have lots of options. The island is known for its local cheese, including melichloro, a hard goat or sheep’s milk cheese, and kalathaki, a soft, white brined cheese. Flomaria pasta is another Lemnos speciality, made from flour, fresh eggs, and sheep’s milk and cut into small pieces. You’ll also see dishes featuring a green string bean called ambelofasoula that is common on the island.

For a traditional taverna, try Galazio Limani in the port village of Moudros, or head to the Blue Flag beach of Thanos and eat at Giannakaros, specializing in fresh fish. If you find yourself in Platys, Grigoris Taverna offers fresh seafood and traditional Greek dishes like gemista (stuffed tomatoes and peppers) and dolmadakia (grape leaves wrapped over rice).

You’ll find surprisingly innovative cuisine in some of the tiny, understated villages on the island. Try Linaria in Romanou for a modern approach to Greek cuisine. The smoked eggplant with tahini and thyme honey and the kalathaki tempura with caper meringue are excellent. At Ennia Po’Ch in Lychna, they take taverna food to a whole different level. Try the dakos salad featuring creamy tapenade and the baklava parfait dessert.

Where to Stay in Lemnos

Surf Club Keros sets the vibe for the island and serves as a great base for exploring. Set in the heart of a Natura 2000 protected ecosystem, this well-organized camp offers safari-style tents, an all-day restaurant, and endless daily activities, including surf and windsurf lessons, sand boarding, archaeological excursions, massage, morning and evening yoga, and more. If you want to take it up a notch, try Keros Blue next door for a more luxurious experience.

If nightlife is what you seek, stay in Myrina where you’ll find lots of hotels and pensions to fit all styles and budgets. Newly-renovated Hotel Astron is located right in the center of Myrina offering clean facilities and easy access to the sites. If beach going is your focus, Lemnos Village Resort Hotel in Platy is a good choice for a stay right on the seaside of a Blue Flag beach.

Lemnos is a place for adventures, and if you have a taste for trying new things, this island has a lot to offer. Beyond the sites above, the island offers biking excursions, sandboarding, water sports, archaeological tours, and more.

The island has an authenticity and humility that’s extremely appealing. Popular places like Surf Camp Keros, and gastronomy restaurant Ennia Po’ch, have the same basic storyline—a group of friends got together and started something to help the community and then it just grew and grew. If the real, unspoilt Greece is what you seek, Lemnos is worth a visit.