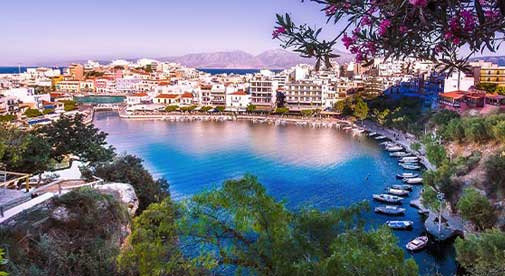 Crete, the biggest island in Greece and the 88th largest in the world, is an ideal choice for anyone who wants to experience Greek island living. Geographically, it is about the size of Delaware in the U.S., and with a population of over 630,000, the island is active and lively all year round largely because of local industry and agriculture. With stunning beaches like the world-famous pink sanded Elafonisi Lagoon, Crete has a lot of tourist offerings, but it is also one of the only Greek islands that can support itself independently without tourism.

Crete makes an excellent retirement choice for many reasons. While it offers many of the attractions that go with island living, including world-class beaches, seaside tavernas, and a relaxed vibe, it also has an effective, functional medical infrastructure. Getting adequate medical care on an island is often a major challenge, but in Crete, because of its size, you have access to good care without having to leave the island.

Sunny weather is another positive attribute as Crete enjoys a temperate Mediterranean climate including mild, rainy winters and hot, dry summers. Because of the varied terrain, the island offers variety, and the mountainous regions have very different weather than the coastal villages.

Located in the southern Aegean Sea, Crete can be reached by sea or air. The ferry trip from the Athens port of Piraeus to Heraklion, the capital of Crete, typically takes nine to 10 hours. A flight from Athens to one of Crete’s three airports (Heraklion, Chania, and Lassithi) is less than an hour.

Cretan pride is a real thing, and people from the island typically identify first as Cretan and secondly as Greek. The classic Cretan rugged individualism, determination, and toughness were made famous during World War II. The Germans were never able to effectively conquer the island, and some scholars point to the Cretan resistance as being pivotal in the eventual victory of the Allies.

In modern Crete, you can still expect a very traditional Greek experience. Cretan villages continue to serve the dishes they’ve been serving for generations like dakos salad, a barely rusk salad topped with sun-ripened tomatoes, feta cheese, and olive oil. It’s also an insular island. You might meet Cretans who have never left the island, and rich in tradition, Crete is a place you’ll see widows wearing black from head-to-toe for decades.

Crete also can offer some diversity and in the larger cities, you’ll find more varied cuisine and culture. Chania in particular offers a metropolis of exotic dining options and has some stylish galleries and shops.

The Greek hospitality runs deep throughout the island but make sure not to cross a Cretan—they are known for their vendettas!

The major cities are Heraklion, Chania, and Rethymno, with each having its own distinct character, flavor, and vibe. Let’s take a look below.

Located in central Crete on the north coast, Heraklion has been the capital of Crete since 1971. With a population of over 200,000, it is the largest city on the island with both a major port and the primary airport. The city features easy access to the ancient Palace of Knossos, one of the most important sites of ancient Greece. Heraklion itself has an urban feel and while the capital isn’t known for having the best beaches in Crete, its central location makes it a practical choice for many expats. If Crete is like Texas in the U.S., Heraklion is probably Dallas.

Located on the northwest coast of Crete, Chania is a beautiful city of under 110,000 people featuring a Venetian port surrounded by a lively and elegant downtown. This city is one of the tourist centers of Crete giving it a diverse and international feeling. Chania is divided into a charming old town near the port and the modern city inland. Both are intriguing in their own right and if you want an international flair, Chania is for you. If Heraklion is Dallas, Texas, then Chania is Austin.

Located between Heraklion and Chania is Rethymno, Crete’s third largest city with a population of around 30,000. As the population indicates, it has a slower, small-town feel than the two other cities. With influences from both the Venetians and the Turks, it is the only city in Crete built on the cape. The geography splits the town into a more commercial side and a quainter side. Staying with the Texas analogy, you can think of Rethymno as San Antonio.

Cost of Living in Crete

The cost of living in Crete largely follows the cost of living in mainland Greece and because Crete is so big, you’ll have lots of housing options. As in the mainland, the cost of living is often about 50% of what you’d expect to spend in the U.S. You can expect housing prices in the big cities of Heraklion, Chania, and Rethymno to be more expensive than in the surrounding towns. Remote villages are always less expensive but may pose challenges to accessibility to all the amenities that make life comfortable.

In terms of actual costs, you can rent a modest one-bedroom apartment in one of the larger cities for about $420a month, and you can expect to pay even less in the villages. Meal prices range depending on your taste, but you can easily find a good taverna meal for two with wine for under $30. A coffee drink will cost you between $1.20 to $5, depending on where you order it from.

Real estate prices in Greece are more dependent on the seller than the actual area or unit. This means prices vary a lot, and your best chance for success is to find a very motivated seller. The average cost per square meter in Crete is $1,900 per square meter which means you can likely find a comfortable two-bedroom apartment in a good area for under $156,000.You can learn more about purchasing real estate in Greece here.

The overall economy on the island is strong relative to the rest of Greece. The island’s per capita income is much higher than in most of Greece, and unemployment hovers around 4% percent, one-sixth of that of the country’s overall rate.

Crete is my top recommendation for anyone who wants to try year-round Greek island living. Due to its ease of access from most places in the world, solid medical infrastructure, comfortable climate, low cost of living, and overall variety of options, it is very suitable for a comfortable retirement. The island is so big and varied, you’re almost sure to find something that fits your dream.