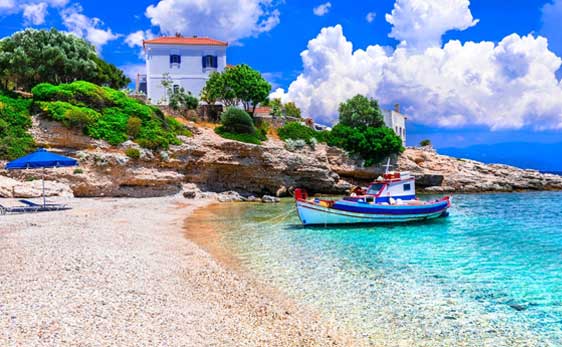 A Guide to the Northern Aegean Islands

In the Aegean Sea, near the coast of Turkey, lies the North Aegean island cluster, including the islands of Lesbos, Chios, Ikaria, Samos, Lemnos, and Samothrace.

These destinations are not on the typical tourist’s radar, which means that people in the know have an opportunity to explore these gorgeous spots without the crush of the crowds found in Mykonos, Santorini, and some of the other more high-profile Greek islands.

This is a golden opportunity because anyone who has visited the North Aegean will tell you these islands are steeped in Greek mythology and rich cultural history, while offering impressive beaches, stunning nature, and exceptional gastronomy. Let’s explore a few of the gems of the North Aegean Island cluster.

1. Lesbos: The Island of Poets

People are often surprised to learn that Lesbos is the third largest Greek island, but with a landmass of 630 square miles, it holds that position after the islands of Crete and Evia. Lying south of Lemnos and north of Chios, this North Aegean island was home to Sappho, widely considered one of the most influential female poets in ancient Greece. Her love poems inspired the term “lesbian” and helped put Lesbos on the map as a destination for the gay community all around the world. The island has an international airport (code: MJT), making it an easy destination from cities throughout Europe.

Sometimes called the Emerald Island, Lesbos is known for its olive groves, which cover about 40% of the land, as well as its raw natural beauty, including hot springs, pine forests, and its UNESCO-recognized geopark featuring a petrified forest. Mytilene is both the port and capital city of the island, and some people use the name “Mytilene” when referring to the island of Lesbos. With a population of over 50,000 people, and as home to the headquarters of the University of the Aegean, the town offers visitors a bustling, lively atmosphere featuring shopping, restaurants, bars, and cafes. Whether you are visiting for its beautiful beaches, the raw nature, the buzzing nightlife, or its myriad cultural events, Lesbos offers great hospitality.

2. Lemnos: The Island of the Amazons

With a landmass of 184 square miles, Lemnos is another large island in the North Aegean cluster and the eighth largest island in Greece. In Greek mythology, Lemnos was home to the Amazons, the daughters of the god of war Ares, and to Hephaestus, the god of blacksmiths and metalworking. Lemnos has an international airport (code: LXS), making it a popular first stop for North Aegean island hopping.

While in Lemnos, visit the ancient ruins of Ifestia, a religious center from the eighth century B.C. named in honor of Hephaestus. For history lovers, the island offers a Byzantine castle and the ruins of ancient settlements dating back to the third century B.C.  For adventure seekers, there are a wide array of watersports including surfing, windsurfing, and kiteboarding. Be sure to check out the surfboard rentals and luxury safari tents at Surf Club Keros.

3. Chios: The Island of Mastica

South of Lesbos and Lemnos lies Chios, the fifth largest Greek island. This island is home to the world-famous mastic groves and the birthplace of mastic liqueur, toothpaste, shampoo, chewing gum, and more. Chios also offers well-preserved medieval villages, a UNESCO-recognized monastery, and over 70 beaches. With a national airport (code: JKH), the island offers regular flights from Athens and Thessaloniki, as well as ferry connections for the nine+ hour sea voyage from the Athens port of Piraeus.

The island is best known for its mastic groves and the industry that surrounds the unique resin called “mastica.” If you’ve ever been offered a sweet after-dinner liqueur at a Greek restaurant, there is a good chance you’ve tried mastica. While on Chios you can visit the “mastichochoria” villages where mastic trees are grown, or if you want an organized overview of the mastica production, you can visit the Mastica Museum.  To get a taste of the past, be sure to visit the Nea Moni Monastery, a UNESCO-recognized site and one of the oldest monasteries in Greece. The site is expansive, with a large church, smaller chapels, and a sanctuary woven with rich history including battles during the Greek War of Independence. Throughout Chios you’ll find ruins dating back to the Neolithic period, and from museums to farms, pebbled beaches to mountain summits, you’ll have a lot to see and do in Chios.

Ikaria lies south of Chios and is one of the five designated “blue zone” locations throughout the world where a disproportionately high number of residents live to be over 100 years old. In Ikaria, the key to longevity is found in its slow-paced lifestyle, its strong community ties, and its fresh, nutritious plant-based diet. A mid-sized island with a landmass of 99 square miles, the island is named after the legend of Icarus. This mythological boy had wings constructed for him by his master craftsman father. With youthful pride, he flew too close to the sun, melting the wax in his wings and sending him tumbling to earth. Look for a statue of Icarus at the Ikaria national airport (code: JIK).

Modern day Ikaria is a rugged and raw island with steep mountains, ancient forests, thermal baths, and unspoilt beaches. It lies less than three hours by ferry from Mykonos, but it is worlds apart. Unlike its glamorous neighbor, Ikaria is known for its unpretentious vibe, reasonably priced food and accommodations, and its friendly, welcoming attitude. If you need to rest and unplug from the world, Ikaria is a good choice. It offers water sport options, and if surfing is your thing, be sure to try out the Ikaria Surf School for surfboard rental or lessons.

5. Samos: The Island of Fine Wine

To the east of Ikaria and less than one mile from the Turkish coast lies Samos, an island famous for its abundant vineyards, world-class wine production, and the point of origin of the Samos Vin Doux, widely considered one of Greece’s best dessert wines. But don’t think Samos is home to just grapes and wine. The philosopher Epicurus, the astronomer Aristarchus, and the mathematician Pythagora are all believed to have lived on Samos.

Connected with an international airport (code: SMI), this 184 square landmass offers visitors over 60 beaches as well as a chance to connect with ancient Greece in places like the Temple of Hera (Heraion) and Pythagoreion, both UNESCO World Heritage sites. Believed to be the birthplace of the mathematician Pythagoras (570-495 B.C), Pythagoreion is a series of archaeological remains dating back to the tenth century B.C.. The site features public buildings, sanctuaries, temples, a market place, a stadium and more. From these ruins, you can take the Tunnel of Eupalinos, a one-kilometer underground tunnel said to be designed by the ancient engineer by the same name.

If fine wine or the influencers of ancient Greece are your interests, Samos is an island worth visiting.

Samothrace (pronounced Sam-oh-thra-kee) lies to the north of Lemnos, and with a landmass of 69 square miles, it is one of the smaller North Aegean islands. With no commercial airport, the island is accessible only by ferry.

If you are seeking mountains and hiking opportunities, Samothrace is a good choice as its highest mountain point reaches 5,285 feet above sea level. Fonias Gorge, one of the more popular trails, takes you by Fonia waterfalls, one of the many scenic waterfalls you’ll find on this island. Beyond its natural beauty, the island offers the Sanctuary of the Great Gods, ancient ruins reminiscent of the temples in Delphi.  This 50-acre area is home to historical buildings, including a palace, the Propylaea of Ptolemy B Temple (impressive gates that led to a sacred temple), as well as the Arsinoe Domes and the Sacred Rock. This island was also the birthplace of the statue Nike of Samothrace, and even though the headless, winged marble statue of the Greek goddess is now housed in the Louvre in Paris, visitors can visit the fountain where it once stood.

Samothrace is probably one of Greece’s best kept secrets, and if you like a free-spirited vibe with lots of natural beauty, this island is worth a visit.

With over 15 islands in total, in addition to these larger islands highlighted above, the North Aegean Island cluster includes Thassos, Fourni, Psara, Agios Minos, the Oinousses islands, and more. A few Turkish islands are also often included in the classification of North Aegean islands, so be sure to double check if you are planning a North Aegean island hopping trip as you might find yourself country hopping as well! The North Aegean islands are a treasure trove of places to explore, tastes to experience, and adventures to have, so use this guide to get started.