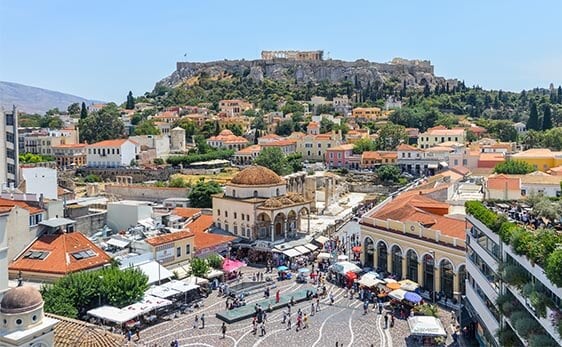 Greece, the cradle of Western civilization, is where philosophy, democracy, literature, theater, and the Olympic Games were born. There are few places on earth so enriched with history and blessed with astonishing natural splendor… and there is no better city to begin your love affair with this amazing country than its exciting, ultra-livable capital: Athens.

Athens embodies everything wondrous about the Mediterranean lifestyle: brilliant cuisine, appealing weather, endless leisure activities, and a relaxed approach to day-to-day life that focuses on family, friendship, and tradition.

Athens is truly the pulsing heart of Greece. It’s accessible to Asia, Africa, and major European destinations. You can fly there non-stop from New York City in less than 10 hours. It’s also the gateway to the iconic Greek islands, a sun-swept wonderland of summer fun and azure seas where wild dolphins play and gleaming yachts bob at anchor.

Despite its size (more than 3 million inhabitants), many parts of Athens don’t feel like a big city at all. There are plenty of quiet neighborhoods where you can find peace and serenity and enjoy the chilled-out Greek way of life.

If you’re dreaming of a new life in Europe that offers just the right blend of affordability, diversity, infrastructure, and low-key livability, Athens should be high on your list. It’s the perfect place to enjoy a healthy outdoor lifestyle brimming with ample sunshine, fresh food, new friends, and fulfilling experiences.

Athens is easily one of the most expat-friendly cities in the Mediterranean. It provides a number of advantages for aspiring retirees, including:

The weather in Athens is characterized by hot, dry summers and mild winters: average temperatures in January tend to hover around the mid-50s F. The nicest times of year are spring and autumn, when temperatures are ‘just right’. Athens is one of the top five sunniest cities in all of Europe, averaging more than 2,700 hours of sunshine per year.

Athens’ public transport system got a facelift around the time of the 2004 Olympics and includes buses, trams, metro lines, and a suburban railway (Proastiakos) that connects the airport with central Athens and the national rail network. The port of Piraeus, about seven miles south of the city center, offers ferry connections to the Greek islands and other parts of the Mediterranean.

Exploring this city on foot is pure joy: its abundance of pedestrian-only streets, green spaces, and easy-to-reach historical areas make it a walker’s heaven. Classic attractions such as the Acropolis, the Agora, Hadrian’s Gate, the Temple of Zeus, and the Plaka district are all within walking distance of each other, with lots of spacious parks and café hotspots to meander through along the way. Athens is a city of hills, which means a spectacular, 360 degree viewpoint is never far away.

Athens is a remarkably safe city, where an individual’s space and freedom are respected and courtesy is the norm. Most crime here is of the petty variety. You’ll feel secure wandering the streets, day or night, in most parts of the city. As in any large urban center, common-sense precautions with personal belongings are the best deterrent to opportunistic theft.

Natural splendor is close at hand

Greece is a physically stunning country with a surprising variety of landscapes. Within handy reach of Athens, you’ll find sparkling islands, rugged mountains, traditional villages, beautiful lakes, and countless examples of Greece’s ancient past: temples, fortresses, ruins, and churches. Bike through wine country, sail the coast, or hike alongside snow-capped peaks in search of rare wildlife. When it comes to enjoying the outdoors, Athens is the perfect base for planning adventurous day trips.

Greece’s Golden Visa program is arguably the best value residency-through-investment scheme in Europe, offering a renewable five-year residency visa to non-EU residents in exchange for a set amount of investment within the country.

Greeks are passionate, resilient, peace loving, and family-focused. They appreciate quality food, lively company, and any excuse for a celebration. Their warmth is genuine. The more time you spend here, the more acts of spontaneous generosity and humble hospitality you’ll experience.

One of the first things you’ll notice about Athenian life is the cafe culture. In North America, grabbing a coffee on the run is normal, but Greeks take a much more leisurely approach. There are cafes on nearly every corner in Athens, and it’s not unusual for coffee-drinking sessions to drag on for hours, late into the night.

Escaping to the beach is a summer tradition, and there are several coastal spots not far from the city where you can cool off when temperatures rise. Schinias, Psatha, Pasalimani, Kalivia, and Legrena are just a few of the beaches you can reach in an hour or less from Athens’ city center.

Keeping fit, eating well, and staying healthy is easy in Athens. Monthly gym memberships average around $35. Healthcare is reliable and affordable. More than 90% of doctors in Greece are specialists, rather than general practitioners.

Most expats in Athens take out some form of private health insurance and use private hospitals to ensure they receive the optimum level of care.

One of the pleasures of living in Athens is the amazing food. From cheap eats at local tavernas to fine dining with a view, eating out is an integral part of the culture. Although you can find all manner of Western-style or ethnic food options, it’s the traditional Greek cuisine that really shines here.

The infrastructure in Athens will keep even the most discerning expat happy. Internet service is reliable, public transport is cheap and efficient, and there’s no need to own a car here—getting around without one is easy.

For many expats, the most positive thing about life in Athens is the stress-free pace and relaxed vibe that permeates this ancient city. The longer you’re here, the less you worry.

Cost of Living in Athens

While Athens isn’t quite as cheap as it was 20 years ago (Greece switched from Drachmas to Euros in 2002), prices for everyday necessities are still much lower than in the U.S.—about 50% cheaper than in Los Angeles, for example. Living in Athens, the biggest savings are noticeable with apartment rentals, which can be up to 85% more affordable than in a typical American city.

You can find a decent one-bedroom apartment in the Athens city center for $400 to $500 per month, and rentals in the suburbs are even better value. A one-way ticket on local public transport costs around $1.65, and prices for groceries (especially fresh produce) are pleasantly low, especially if you avoid chain supermarkets and frequent weekend farmers’ markets instead.

House prices in Greece have dropped around 60% since 2009, so if you’re looking to retire in the Athens area, there are some exceptional property deals to be had.

Things to Do in Athens

There are plenty of cool ways to get to know Athens better, as a tourist or a resident. Take a free walking tour, spend the morning on a ‘hop-on, hop-off’ bus, rent a bicycle, or just put on a good pair of walking shoes, grab a map, and start strolling.

History is all around you in this city: climb up to the Acropolis, amble through the Plaka, check out the ancient Agora, or spend the day checking out Athens’ superb array of museums.

One of the simplest ways to hit the beach is to take the Green Line (metro) from Syntagma Square in the direction of Askllipiio Voulas and jump off at the stop for Edem. Some beaches near Athens charge a fee, but Edem is free.

For people-watching, there’s no better place than Monastiraki Square. Yes, it’s touristy, but there is some impressive ancient architecture in the area. For the best sunset views, climb up Lycabettus Hill (or cheat and take the funicular). Another fine spot for epic city views is the centrally located ‘A for Athens’ rooftop bar.

One of the quirkiest and most enjoyable Athens summer traditions is open-air cinema. There are normally two showings per evening, at 9 p.m. and 11 p.m. English movies are subtitled in Greek and you can sit anywhere. Some of the city’s most famous open-air cinemas include Dexameni, Thission, Aegli, and Cine Paris, which has been around since the 1920s and offers premier views of the Acropolis to add to your movie experience.

Athens is well positioned as a hub for day trips to traditional villages, mountainous hiking areas and distant beaches. If you fancy an island jaunt, Hydra is an excellent choice. The ferry from Piraeus will get you there in an hour or so for around $64 (return). You can spend a thoroughly relaxing day on the island and be back in Athens before the sun sets.