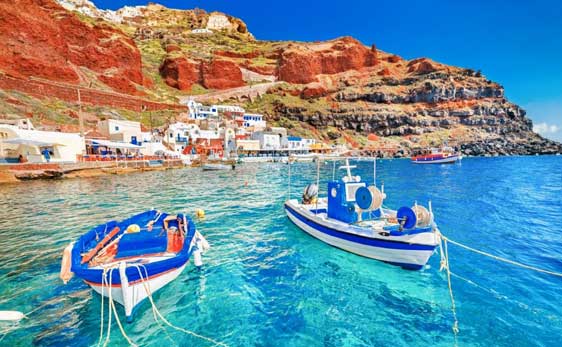 The Cyclades is an island grouping in the Aegean Sea located southeast of mainland Greece. The word “Cyclades” is derived from the Greek word kyklos (κύκλος), meaning “circle”, because the islands in this cluster form a circle around the sacred island of Delos. The architectural ruins of Delos are a popular spot to visit, but there are no overnight stays on this island as the entire island is dedicated to the ancient archeological site.

While there are technically over 200 islands in the Cyclades cluster, many of the smaller islands are uninhabited, and most visitors go to one of the twenty marquee Cyclades islands. High profile islands include Santorini, Mykonos, Naxos, Paros, Serifos, Sifnos, Siros, Tinos, Milos, Folegandros, Andros, and Ios. Below is a guide to a few of the more popular Cyclades islands.

It is worth noting that most Greek islands have what’s called a chora or capital village. These terms are used interchangeably, so when you hear of a village called “Chora”, on whichever island you are on, you’ll know that’s the capital town of the island.

Siros is the administrative capital of the Cyclades and is an island that is active all year round. Heavily influenced by the Venetians, Siros has a distinctly northern European feel with neoclassical homes and mansions peppered along narrow, winding cobblestone alleys. The total island population is under 20,000, and the largest town is the port city of Ermoupoli.

The island is known for its culture, and you can easily find quality international dance, film, and art collaborations and festivals running throughout the year. The island also offers diverse dining options, ranging from classic Greek tavernas to sushi and Asian restaurants. If you are a culture vulture, a fan of neoclassical architecture, or someone who likes fine dining, Siros is worth a visit.

Also called Thira, Santorini is probably the most visited island in Greece, and for good reason. It’s extremely photogenic and offers unparalleled views of a partially submerged caldera from Oia (pronounced Ee-ah), a coastal village on the northwestern tip of the island. Featuring sheer cliffs, white-washed buildings, narrow, cobbled streets, and stunning blue domes, when most people imagine “Greece,” they are thinking of Santorini. The famous caldera is interesting in its own right and has been designated a “Decade Volcano,” a volcano worthy of study because of its history of eruptions. But don’t worry, despite the fact it is listed as an active volcano, the last eruption was in 1950, and it’s closely monitored even today.

Santorini also offers some interesting beaches including the Red Beach (with red volcanic pebbles) and the White Beach (similar to the Red Beach but with white cliffs surrounding the seaside). While it’s hard to escape the tourist vibe of the island, the stunning views and natural beauty make it worth a visit. Living full-time in Santorini might be another story, and it’s worth a careful comparison of the prices between Santorini and Athens.

The glamorous party island of the Cyclades, Mykonos delivers vibrant clubs like Scorpios, Jackie O, and Cavo Paradiso, as well as world-class beaches like Psarrou, Platys Gialos, and Elia. Mykonos Town (Chora) features elegant shopping, a wide spectrum of dining options, and plenty of bars and clubs to keep you entertained. It’s easy to have a very good time in Mykonos, but it isn’t easy on your wallet. As one of the most expensive Greek islands, if you’re on a strict budget, Mykonos might not be a top choice.

Next door to Mykonos but worlds apart in terms of culture lies Tinos, a modest but beautiful island with under 10,000 full-time residents. Tinos is most famous for its elegant Church of Panagia Evangelistria (also known as the Megalochari) and the annual pilgrimage that takes place on August 15. People come to the island by ferry and make their way from the port to the church (2,600 feet) on their hands and knees on this day as a sign of devotion.

With a landmass of 170 square miles, Naxos is the largest island in the Cyclades and promises something for everyone. From long, shallow beaches perfect for families with small children to steep hills featuring quaint mountain villages with local distilleries, the island mixes tourism with an authentic Greek experience. Called the “King of Cheese”, Naxos offers several kinds of specialty cheese, including its famous Naxos Graviera and arseniko. In recent times this island has become a destination for digital nomads, expats, and retirees alike. If you are looking for a new home or a long-term stay, be sure to check out Naxos.

Less than 40 nautical miles from Naxos lies Paros, an island famous for its world-class windsurfing beaches like Golden Beach and for its lively nightlife in the towns of Naoussa and Parikia. The island also has mountain villages, like Lefkes, featuring traditional Cycladic architecture and popular beaches like Kolymbithres, famous for its interesting rock formations and crystal blue water. Paros is less than one-third the size of Naxos, making it fairly easy to navigate, and you can make a trip around the island by car in under two hours. From Paros you can also easily travel to Antiparos, a charming lesser-known island right next door with beautiful beaches and a lively chora, all the makings for a great day trip.

Situated between Paros and Santorini lies Folegandros, a tiny island of 12 square miles with under 1,000 full-time residents. The island is known for its tall, sheer cliffs and three main villages of Chora, Karavostasi, and Ano Meria. This is a slow-paced island featuring natural beauty and an off-the-beaten-track vibe. If you are trying to avoid the tourist crowds, and you like nature, Folegandros might be a good stop for you.

The island of Ios is known for two things: its beautiful beaches and its wild nightlife. Located between Naxos and Santorini, the island checks all the boxes for a classic Cycladic island: gorgeous beaches with clear, blue waters, white-washed buildings, blue domes, lots of churches, and even colorful bougainvillea. Chora and Ormos are the main villages on this island encompassing 42 square miles. Party late into the night and then spend the day recovering on one of Ios’ dozens of beaches. Mylopotas and Gialos Beach are popular choices.

If beautiful beaches are your priority, Milos is a great choice for you. This island is about three hours by ferry from the Piraeus port in Athens and offers over 40 beautiful beaches, despite its relatively small size of 58 square miles (about one-fifth the size of Naxos, the biggest island in the Cyclades). Milos is a favorite among Greeks and is known as being a romantic island, well suited for couples. Its most famous beach is Sarakiniko, a seashore featuring white volcanic rock formations set above the sparkling, turquoise water. The beach has an otherworldly feel and is like no other in Greece. And because of the island’s small size, it is easy to beach hop, seeing beautiful seaside after beautiful seaside all in the same day.

Located near Milos, Serifos is known for its raw, remote beaches offering unspoiled, natural beauty. The chora is set high on the slopes of a hill, offering impressive views of the Aegean Sea and a dramatic and windy atmosphere. While a few beaches, including Livadi and Livadakia beach, are organized and offer sunbeds and refreshments, most of the beaches are unorganized, secluded, and a bit remote. If raw nature and seclusion are what you seek, Serifos might be a good choice for you. It’s a relatively small island, coming in at 29 square miles, so it is fairly easy to navigate.

Described as the “most delicious island in Greece”, Sifnos is known for its fine dining and innovative, international cuisine. The birthplace of Nikolaos Tselementes, the “Julia Child” of Greece, Sifnos offers restaurants like the Cayenne Restaurant Art Gallery, Omega3, and Maiolica Restaurant, just to name a few. But don’t imagine Sifnos only has amazing food to offer. It is also the pottery capital of the Cyclades, and all over the island, you’ll find ceramic stores with colorful, high-quality plates, cups, bowls, and home decorations. Want to make something yourself? Visit the En Sifno Pottery Workshop to schedule your own pottery lesson.

Andros is the northernmost island in the Cyclades and is less focused on tourism than many of the other marquee islands. While it’s light on tourism, if you are a hiker, this may be your place. The island offers 18 marked trails totaling over 60 miles, and Andros is listed as a “Leading Quality Trails Best of Europe” destination, confirming that it is one of the best places to hike in Europe. While in Andros, visit Andros town, Batsi, and Gavrio, three of its main villages, but don’t expect to see the classic Cycladic architecture of white-washed buildings with blue domes. Andros has more neoclassical-style architecture and features red-tile roofs instead of blue domes.

These are just 12 of the dozens of islands you can see island hopping throughout the Cyclades. This list goes on and we could easily highlight a dozen more stops, but the best thing to do is to come and see for yourself. And if you want to explore even further, see our full guide to the Greek islands and learn about the character and color of the many island groupings Greece has to offer.