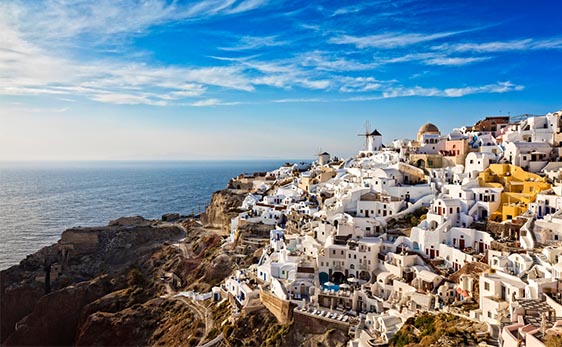 Traditions and Culture in Greece

One of the best things about moving to a different country is learning the customs of your new home. If you move to Greece, you’ll be rewarded with a culture woven in rich history, dramatic celebrations, and a strong sense of community. Here are a few highlights of Greek holidays and traditions.

Easter is by far the most important holiday in Greece. With approximately 90% of the population Greek Orthodox, Easter follows the Orthodox calendar which means it is often a different date than Catholic Easter. The holiday is so important that an entire week (Megali Evdomada or Big Week) is dedicated to it, and many other Greek holidays are based around Easter. The Big Week starts on the Monday before Easter with various preparations and culminates with a midnight mass on Big Saturday and the subsequent traditional late-night celebratory Greek dinner that follows.

On Good Friday, many cities and villages have a precession depicting Jesus being carried through the streets on a cross. Don’t be surprised if you hear what sounds like a marching band and see a procession on Good Friday.

On Saturday night before midnight, most people gather at a church for the Resurrection Ceremony. The full ceremony starts hours before but ends at midnight with a candle and bell celebration with everyone calling out “Christos Anestis” (Christ has risen). Even for the non-religious, it has a very uplifting and celebratory feeling. After midnight most families gather for a meal either at home or at a nearby taverna and eat magiritsa, a traditional soup made with lamb and vegetables including lettuce, dill, and onion boiled together. The celebrations continue on Sunday when many families meet again for a Sunday meal. These meals are when the famous red Greek Easter eggs come out for an egg cracking game. Hard-boiled eggs are dyed red, and each player holding a red egg taps the end of his or her egg lightly against the end of the other person’s egg. Whichever egg is uncracked at the end wins, and the tradition says the holder will have good luck for all the year.  There is something magical about Greek Easter especially watching how the whole country comes together to celebrate.

While Easter has its origins in ancient religion, Oxi Day is based on the events of World War II. On the night of October 28th in 1940, shortly after 3 a.m., the Greek Prime Minister Ioannis Metaxas was woken up by pounding on his door from the Italian ambassador to Greece, Emanuele Grazzi. The Italian ambassador was demanding that Greece allow Axis forces to enter Greek territory and occupy certain unspecified “strategic locations.” I first heard this story from one of my Greek language teachers, Rosa. She explained, “What were the strategic locations they wanted to go to? The Aegean Sea? They were asking for permission to occupy Greece. Of course, we said no.” In Greek, “oxi” is no, and this is the answer the Prime Minister gave to Italy. The entire country celebrates this resistance to invasion as “No” Day, a national holiday. Rosa also pointed out another interesting thing about Greek culture. “While we celebrate the beginning of a war, we have almost no idea when the wars end. Greek mentality is to celebrate the beginning of a fight.” For Oxi Day, there are parades through Athens, Thessaloniki, and other cities and towns, and many people fly the Greek flag from their balconies. While there is a military flavor to the day, the celebrations are festive, and everyone enjoys a day off work.

Oxi Day and Orthodox Easter are fixed dates celebrated together by the entire country, but Greek name days are celebrated more individually. In Greece, almost every day of the year is dedicated to a saint or martyr, and if you share a name with the designated saint or martyr, that becomes your name day too. It is customary for your friends and family to call to wish you a happy name-day and for you to offer sweet treats to share with others. Name days are almost more important than birthdays, and if you move to Greece, you’ll want to learn the name day calendar. While living here, I was baptized Greek Orthodox so I now have a name day myself. My Greek name is Evangelia, and my name Day is March 25, which is also Greek Independence Day.

As my Greek teacher Rosa pointed out, this date marks the beginning, not the end of a war. On March 25, 1821, Greeks rose up against their Ottoman oppressors and began what would be the nine-year War of Greek Resistance. March 25 is also the feast of the Assumption of Mary so the date has both historical and religious importance. It is a national holiday and in some parts of Greece, there are Independence Day ceremonies. If you are in Athens on March 25, the Ravagas Church in Plaka has a special bell-ringing ceremony to commemorate the start of the Greek Revolution.

The Saint’s Day for the Virgin Mary

The Virgin Mary is important in Greek culture so another big date in Greece is August 15 or Dekapent Avgoustos. This is the saint’s day for the Virgin Mary making it one of the two name days for the name “Maria.”  Many people go to church to acknowledge the day, and a top pilgrimage destination for this holiday is the island of Tinos. Here you find a tradition of people walking on their knees from the port all the way up to the base of the Church of the Virgin Mary. This pilgrimage is done by people in need of special miracles who are praying to the Virgin Mary for help. While Tinos is the most famous destination, most Greeks try to be somewhere on that special day, like an island, their village, or a church, and most stores are closed. For many Greeks, this marks the beginning of a two week summer holiday period.

Another festive period in Greece is Apokries. Apokries is the period which begins several weeks before Lent and culminates on the weekend before Clean Monday, the first day of Lent. The period of Apokries is a time of carnival and celebration, a last hurrah before the stricter Lent restrictions begin.  The word “carnival” comes from the Latin “carnem levare” meaning without meat, and the translation follows in Greek as “Apokries” translates to “no more meat.” During those weeks, there are many formal and informal carnival parties throughout the country. The city of Patras in the Peloponnese hosts the biggest carnival in Greece, as it has for the last 180 years. Carnival is lively and colorful with elaborate floats and thousands of people in masks and costumes coming for dancing, drinking, and general festivities.

In the middle of the Apokries period is a special Thursday celebration called Tsikopempti. Tsiknopempti or Smoke Thursday is a big meat-eating day with large outdoor parties and barbeques where huge amounts of meat are grilled or roasted. All throughout the streets of Greece, you smell grilling meat and barbeque smoke. This day is a celebration prior to the Lent fasting when more religious Greeks forego meat for the 40 days before Easter.

“Kathari Deftera” or Clean Monday marks the end of Apokries and the beginning of Lent. Clean Monday is a holiday in Greece and is celebrated with outdoor activities including the custom of flying kites. The day features a special meal with dishes based on seafood, including cuttlefish, octopus, and shellfish like shrimp and mussels. Taramosalata, a dip made of the salted and cured roe from carp or cod, mixed with olive oil, lemon juice, and bread crumbs is another dish served on Clean Monday.

As you can see, the Greek Orthodox religion is a big part of the backbone of celebrations and holidays in Greece. But don’t worry if you aren’t religious—while the dominant religion is Greek Orthodox, most of the country has a relaxed and flexible approach to how religion is practiced. Some are very strict, but most are not.

A few days in Greece that differ from North American customs include:

Christmas: Christmas is celebrated in Greece but it isn’t as commercial as in the U.S. The focus is more on gathering as a family and eating.

New Year’s Eve Celebrations: New Year’s Eve isn’t that big of a deal in Greece. Most people are with their families to welcome in the New Year and any outside celebrating is done after midnight usually with small groups of friends meeting up.

The longer you live in Greece, the more context each of these holidays has.  And with Greek “philoxenia” love of strangers, you’ll likely be welcomed with generosity and kindness to take part in the celebrations and customs.