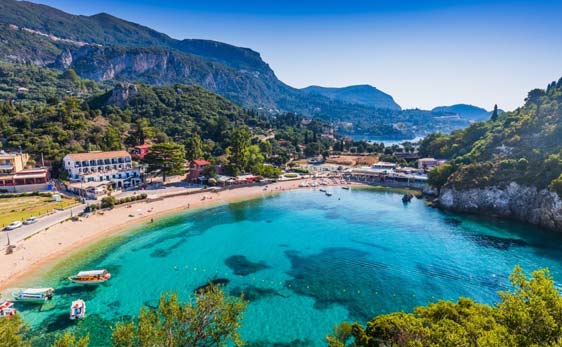 In the Ionian Sea near the coast of Italy lies Corfu, the administrative capital of the Ionian islands. With a landmass of 236 square miles, Corfu offers a fascinating blend of ancient Greek history, Venetian influence, and modern popularity.

Named after the beautiful nymph Korkyra who fell in love with the god of the sea Poseidon, the city was under Venetian rule for hundreds of years. People from Corfu are referred to as “Corfiots” and the restaurants on the island boast Corfiot cuisine, recipes that blend Mediterranean and Venetian influences. With a full-time population of over 100,000 people, Corfu is an island that is lively year-round and whether you come as a tourist or for a long-term stay, you’ll find lots to see and do.

How to Get to Corfu

Corfu has an international airport (airport code: CFU) named after Ioannis Kapodistrias, a Corfiot statesman who was elected the first head of modern independent Greece in 1827. This airport offers connections to many major European cities year-round with more frequent flights during the high season of April to October.

The airport is an attraction itself and offers visitors the opportunity for “plane spotting.” With only one short runway and a picturesque sea nearby, watching the planes touch down on the landing strip is both dramatic and surprisingly exciting. Places like the Skyview Cafe near the Grand Royal Hotel capitalize on their strategic viewing location, and you can enjoy an afternoon sipping beverages and watching the planes land.

Ferry travel is another popular way to get to Corfu with many connections from the Italian ports of Venice, Bari, and Ancona, or the Albanian port of Saranda. From Greece, you can take one of the frequent ferries from Igoumenitsa, a major port in northwestern mainland Greece. From Athens, travel by ferry is more complicated as you need to depart from Patras, a port city about 130 miles from Athens.

When to Visit Corfu

Corfu is active year-round, but you will have a fuller experience if you come during the high season months of April to October when the restaurants, beach bars, shops, and theaters are open and vibrant. Offseason travel has its own charm but expect a colder, wetter climate with a more low-key island vibe. The small towns and villages can become desolate, and the beaches are chilly. But even in the offseason, Corfu Town and some of the larger villages remain lively as the fireplaces and full-bodied red wines of winter replace outdoor patios and the crisp white wines of summer.

If you can make it to Corfu for Greek Orthodox Easter, you’ll enjoy some of the best festivities Greece has to offer with not one but two resurrection celebrations.

Where to Stay in Corfu

In Corfu, you’ll have a wide variety of accommodation ranging from luxury villas to backpacker hostels.

Beyond the regular hotel options, there is a whole cottage industry of private villas available to rent. You can check out The Elysian Luxury Villas to see some high-end accommodations. And if you’re more budget-conscious but also seeking something with character, check out The Pink Palace hostel in Agios Gordios offering both private and shared rooms. Hotels, pensions, and Airbnb options are all over the island so you only need to decide if you want to stay in a lively area like Corfu Town or somewhere smaller like the village Pelekas.

Corfu is big so it’s easiest to navigate by car. However, if driving is something you want to avoid, the island has a robust taxi system and two types of public buses: the blue buses offering short destination rides and the green buses for longer journeys.

Amazing Things to See and Do in Corfu

There is much to see and do in Corfu and from fine dining to historical tours, there really is something for everyone. Below are just a few highlights from this popular island.

1. Stroll Through the Old Town of Corfu

In 2007, UNESCO World Heritage listed the Old Town of Corfu as one of its sites making it official that the town has outstanding universal value to humanity. The award is based on the two Venetian fortresses designed to withstand invasion by the Ottomans. The Old Fortress (also called the Citadel) was built in 1555 and lies on an artificial peninsula while the New Fortress, built later in the same century, stands on a hill overlooking the town. Designed by the Venetian architects Ferrante Vitelli and Michele Sanmicheli, these fortresses are considered stellar examples of fortification engineering and must have been effective since the island was never conquered by the Ottomans. The Old Town also showcases preserved British neoclassical housing of the 19th and early 20th centuries.

Don’t think the Old Town only offers interesting architecture as Corfu Town’s center has a lively plateia (town square) called Esplanade Square and winding alleys lined with restaurants, bars, cafes, and shops. Between the Old Fortress and the town center, you’ll find the Esplanade, a large green area for relaxing or strolling. Corfu Town is by far one of the most entertaining capital cities of any Greek island.

2. Climb to Angelokastro, the Guard of Corfu

Located on the northwest coast, a visit to Angelokastro is breathtaking as this Byzantine castle sits at the top of the highest peak of the island’s shoreline. Standing 1,000 feet (305 meters) above the sea, a visit up the steep stairs to this site will take your breath away on the way up but then reward you with a gorgeous view.

This castle was strategically important and with its location high on the hill, it was ideally situated to monitor the west coast of Corfu from invaders and pirates. With its sheer cliffs, it was easy to defend, but the Corfiots hedged their bets and built a church dedicated to the Archangel Michael. Inside the castle, you will find аn асrοpоlis, the church honoring the Archangel Miсhаel, and ruins οf а tоwеr and a gаrrisοn. The site is worth a visit and weaves together ancient history with a stunning natural setting.

Not far from Angelokastro, you’ll find the Paleokastritsa Monastery dating back to the 13th century. This working monastery is run by a small brotherhood of monks who offer tours of the buildings and gardens when they aren’t giving mass or making their own olive oil. The monastery has a small museum and a shop where you can buy souvenirs including their signature olive oil.

After a visit to the monastery, head down to Paleokastritsa Beach (also called Agios Spyridon Beach), a narrow beach with golden sand and calm, clear blue waters. The setting is striking and with organized and unorganized beach options, you’ll find a spot that suits your taste. This is one of the most visited beaches in Corfu.

4. Walk to Vlacherna Ιslet and Sail to Mouse Island (Pontikonisi)

If you want to see some iconic Corfiot landscape, pay a visit to Vlacherna Islet and the legendary Mouse Island. Situated in front of Corfu Airport, Mouse Island is one of the first things most visitors to Corfu see. The island itself is accessible only by boat and only during certain hours. However, its neighbor, the Vlacherna Islet, is connected to mainland Corfu by a 985 foot (300 meters) walking path. You can walk to Vlacherna and then take a short boat ride to Mouse Island.

The origins of the name Pontikonisi (“mouse island” in Greek) are not clear. Some say it is because the island is shaped like a mouse. More believable explanations include the theory that in the 11th century, many of the monks in the monastery came from the Pontos area and the named morphed. Whatever the origins, Mouse Island today is a tiny, peaceful spot featuring the 11th-century, Byzantine Church of Pantokrator surrounded by lush vegetation. It’s a nice place to relax in nature for an hour or two, and the island includes a small cafe that serves refreshments.

Vlacherna, the home of a monastery built in the 17th century, is also worth a look. The building offers impressive architecture outside and colorful frescoes inside. From both islets, you’ll have lots of opportunities for memorable views of the surrounding area.

With over 50 beaches, this island doesn’t disappoint when it comes to beautiful seasides, but as you can see Corfu offers much more than sea and sand. It gives you castles on hills, monasteries on islets, and a cosmopolitan city center vibrating with energy.  If you love Italy and you love Greece, you’ll love the fusion that is Corfu.