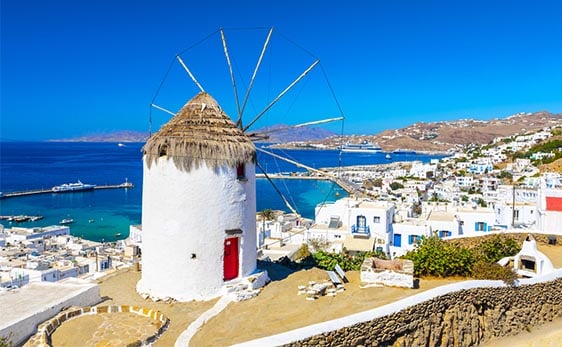 Cost of Living in Greece

If the great Mediterranean weather, amazing food, hospitable people, and the opportunity to island-hop wasn’t already enough, the cost of living may be one more reason to lure you to Greece. From housing to dining out, healthcare to hair care, the average cost of living in Greece is significantly lower than the U.S.

Below we outline the basic costs, a sample budget, and a few areas to watch out for to avoid any costly surprises.

Rent: Your first major decision is where to live. With a population of under 11 million, even the big cities in Greece aren’t that large on a worldwide scale. Athens, the capital, is home to 3.2 million people and is by far the most populous city in thecountry. The next biggest city, Thessaloniki, has 812,000 residents. Apart from these two metropolitan areas, there are lots of mid-size towns and many tiny villages.  Depending on your lifestyle preferences, you can find something that suits your needs, but if a low cost of living is your primary goal, the smaller towns and villages tend to be less expensive.

On average, the cost of rent in Greece is approximately 70% lower than in the U.S. Since rent or a mortgage is usually your highest monthly expense, this makes a big difference in your budget. In Athens, you can rent a comfortable one-bedroom apartment for under $650 and if you live in a smaller city or a village, rent can be under $350. Apartments range from modern with updated kitchens and bathrooms to rustic with handheld showerheads and old-fashioned fixtures that may make you feel like you’re in a vintage movie. You can check websites like Spitogatos.gr to get a sense of prices.

Groceries: The cost of food at regular supermarkets feels roughly equivalent to the U.S. and much of Europe. With a little bit of effort, you can lower your food bill by going to the laiki (Greek for “people’s market”) where farmers and producers sell their goods directly to you. These markets offer fresh, locally grown produce, eggs, nuts, and some other basic staples like rice and beans. Similar to farmer’s markets in the U.S. but often at a fraction of the cost, laiki markets are held outdoors and follow a seasonal schedule. The quality of the food is amazing and the experience of walking up and down the colorful isles of olives, tomatoes, eggplants, legumes, and so forth is both fun and economical. Be sure to ask around for the laiki in your neighborhood.

Utilities: Utilities are an area worth focusing on because this is one area that can fluctuate and leave you with unpleasant surprises.

Dining Out: Greece features both tavernas and restaurants.  Tavernas tend to offer lower cost, basic menus with Greek classics like grilled fish, dolmas, tzatziki, Greek salads, and so forth. The dishes are straight forward typically with less than five ingredients and almost always seasoned with olive oil and fresh lemon juice. House wine at tavernas tends to be very low cost (half a liter is often $5 or less) and can be reasonably good. Even in the big cities, you can easily have a taverna meal with two with wine for under $30 and with a little research and effort, you can pay even less. Restaurants run the entire gamut and can be quite budget-friendly or expensive, depending on your taste. Greece offers fine dining so how much you spend really depends on you. Street food is also popular in Greece and if you want an inexpensive meal but you don’t want to cook, you can easily get a souvlaki, kebab, or gyro for under $5.

Medical: Greece offers two healthcare options: a nationally-funded universal public healthcare system and private insurance. With public healthcare, emergency room visits are free regardless of your employment status or nationality. For all other services in the national healthcare system, you’ll be charged either out of pocket (if you don’t have an employer sponsor) or through your AMKA employer-provided insurance plan. Private insurance giving you access to private healthcare can be purchased and is generally significantly less expensive than in the U.S. Plans vary, but it would be reasonable to expect to pay about 50% of what you pay for U.S. health care premiums.

Personal Care: Wages in Greece tend to be low, and this influences the personal care industry as well. The price for a basic women’s haircut in Athens is about $35 ($25 for a men’s cut).  You can get your nails painted for under $7. You can easily find a personal trainer for under $30 per hour, and house calls for all of these services are normal.

*healthcare is often covered by your employer so this budget item assumes you don’t have employer-sponsored coverage.

While this is a basic overview of the cost of living in Greece, I would be remiss if I didn’t add one important thing: the longer you live in Greece, the less expensive it typically becomes.

Video: Cost of Living in Greece

When I moved from San Francisco, California, to Athens, Greece, in 2012, I didn’t come for economic reasons. The move was purely intuitive. After 15 years of living in San Francisco and working as a Certified Public Accountant, something deep inside me wanted to be in Athens. And so I came with my dog, my two cats, and one suitcase.

In the years since, Greece has been good to me, and I could spend hours listing all the things I love about my adopted country: the genuine warmth of the people, the fact it gets over 250 days of sunshine a year, the mountains of Meteora, the beaches of Milos, seaside fish tavernas with grilled octopus and tsipouro (a brandy from Crete), the Greek language that has eight different words for love, the list goes on…

There’s also the more practical elements of life here. Because the cost of living is so much lower than most of the U.S., you can live very well. I was able to quit my work in the finance field to become a full-time writer and yoga instructor. If you want a life change, Greece just might be your place.

One of the first things I noticed is that the cost of housing in Greece is relatively low. You can easily rent a respectable apartment in the heart of the capital, Athens, for less than $650 per month. If you want to put down roots or even buy investment properties, that’s an option too.

Since moving here, I’ve purchased and renovated two apartments near the Acropolis and put them on Airbnb to earn extra income. My first purchase was a 269-square-foot apartment for €28,000 (about $31,000). And I went on to buy a second, bigger apartment for even less. You can get great real estate deals in Greece if you know where to look, and expats can easily buy property here as long as they follow a few administrative steps.

If you are considering a move away from the U.S., one of your considerations will be healthcare. I’ve been impressed by Greek medical care. There are plenty of extremely highly-qualified doctors who speak fluent English and have often been trained in the U.S. or U.K. The Greek medical community is sophisticated, and the country has become a destination for medical tourism too. Because healthcare is largely socialized, you can get plenty of routine or more specific treatments for a fraction of the cost you would pay back home.

Last summer I had to go to the doctor for an eye infection. I went for an eye exam and was given a prescription for antibacterial cream. The cost for the visit? Zero. Healthcare in public hospitals is free for Greeks and expats alike. The administrator looked confused when I asked where to pay. The cost of the prescription? Four dollars.

Greek doctors are also kind. This eye infection happened days before I was supposed to do my duties as godmother at a baptism. When I explained the situation, the doctor looked at me directly and said, “That’s an important day. I think the swelling will be gone by then. Don’t worry!” I actually feel much more secure about my healthcare future since moving to Greece.

The lower cost of living extends to all parts of life. In the eight years I’ve lived in Greece, I haven’t had a car because I haven’t needed one. I live in the center of Athens where I can walk most places, but when I do need to take a taxi, they are easy to hail and cheap to ride in. The minimum fare is under $4 with a standard rate of about $1.30 per mile. I easily get across town for under $10. It’s much cheaper than my life in San Francisco where taxis have a standard rate of about $3 per mile.

If you are concerned you’ll be cheated by a taxi driver, don’t be. The free app, Beat, is widely used and acts like Uber, allowing you to hail, track, and rate your taxi ride.

And if you are wondering if you will miss out on art and culture in Greece, don’t worry. You won’t. The Basil and Elise Goulandris Modern Art Museum in Athens offers a yearly membership for $65 so you can go as often as you want to see their five floors of impressively diverse modern art. The Stavros Niarchos Foundation Cultural Center offers all types of free events including theatre, live music, and films. My favorite time to visit is during the holidays when they offer a colorful sound and light show on their pavilion.

The economic scale of Greece compared to the U.S. can be so different, it’s almost confusing. It took a dinner with a group of friends, who all work as electricians in Greece, for it to really hit home. When the bill of €40 ($44) for the four of us came, I started to leave a €5 tip. My friend, Dionysis, looked at me in horror.

“Do you understand that most of this country lives on less than €900 per month? There is no need to leave a €5 tip!”

Thanks Dionysis—I’ve got it now.