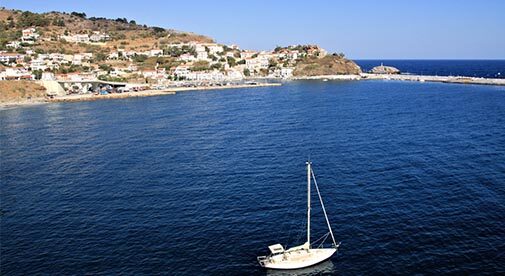 With over 200 inhabited isles, it can be difficult to choose which Greek island to visit. The marquee destinations of Santorini, Mykonos, and Corfu are popular choices, but sometimes you want to go off the beaten path and visit somewhere less focused on tourism. Located in the east Aegean sea, with a population of under 10,000 people and a size of 99 square miles, Ikaria is one of my favorite places in Greece. Here are four reasons it might become one of yours too:

It Can Teach You the Secrets of Longevity

Blue Zones are longevity zones where people live longer and healthier—the data shows a disproportionate percentage of these populations live to be over 100 years old. There are only five blue zones in the world, and Ikaria is one of them. Sharing this status with Okinawa (Japan), Loma Linda (California), Sardinia (Italy), and the Nicoya Peninsula (Costa Rica), Ikaria has cracked the code on longevity—it has more healthy people over 90 years old than anywhere in the world. The secret?  A diet loaded with local fresh vegetables, fruit, fish, and nuts, plenty of exercise, low stress, and a strong sense of community. Perhaps more importantly, Ikarians have taken back control of time. The island is known for its slow pace and its relaxed vibe. It feels like a designated “stress-free” zone, and it is very hard to maintain a fast-paced attitude in Ikaria. The island just doesn’t support it.

In Greek mythology, Ikaria is named after Icarus, the son of the master craftsman Daedalus who created the Labyrinth in Crete. To escape Crete, Daedalus constructed wings for his son warning him not to fly too high. But Icarus suffered from hubris, excessive pride leading to poor judgment, and ignored this warning. He flew too close to the sun melting the wax in his wings and crashed to his death near the island now named Ikaria. The island’s modern history is even more colorful. Ikaria is nicknamed “Red Rock,” not because of its geology but because of its left-leaning politics. After the Greek Civil War (1946-1949) ended with the government’s army overthrowing the Greek communist party, over 13,000 leftists were exiled to Ikaria. The government didn’t offer much in the way of integration so the native Ikarians and their new communist exiles worked together to feed and house the transplants. An unintended consequence was that many Ikarians became communist themselves, and the politics of the time extend to this day with a large percentage of the population leaning to the political left.

I run an annual yoga retreat on Ikaria, and I always tell my guests “Leave your designer dresses and high heels at home. This isn’t that place.” Instead, Ikaria offers you raw, rugged natural beauty. The island features thermal hot springs, ancient forests, beautiful beaches, and rugged mountains. You’ll find thermal water, both in the sea and in man-made spas, throughout the island with many baths located at the northeast and southeast coasts. These springs have therapeutic properties, and people from all over the world come to heal in their waters. The Randi Forest in the center of the island is home to trees dating back over 300 years, making it one of the oldest remaining forests in the eastern Mediterranean. This forest includes a protected oak tree species “Quercus ilex” which is believed to have evolved around five million years ago.  Ikaria has some of the best beaches in Greece, with places like Nas Beach below the temple to the goddess Artemis, the patroness of sailors and protector of wild animals. From Nas, an easy 15-minute drive down the coast brings you to Messakti Beach and the Ikaria Surf School where you can relax at one of the four beach bars or book a surf lesson. The island is full of contrasts, and you can enjoy a day at the beach and then stargaze at night from the Erifi Plateau. The area has a 360-degree view, some of the darkest skies in Greece, and a computerized telescope making for the perfect combination of elements for stargazing.

It Boasts Bountiful Health and Healing

An Ikarian local once told me she thinks of Ikaria as the Pachama, the earth mother, and said “Ikaria is for anyone who needs healing.” There are stories supporting this, like the 2012 New York Times feature about a man diagnosed with cancer who came to Ikaria to die and ended up outliving all of his doctors. On a subtle level, you feel it. This is an island where people rebook their return tickets because it feels so good to be there, they just don’t want to leave. Maybe it’s the combination of the slow pace, the healing food, the natural beauty, the communal attitude, but something about the island does bring you back to balance and equilibrium. The Ikarian diet which leans heavily on lentils, chickpeas, olive oil, and wild greens contributes to the low instance of disease on the island. Ikarian teas ranging from sage tea with garlic and honey, to infusions with oregano, rosemary, mint, chamomile, and mountain tea offer more therapeutic benefits. And healing isn’t all done on a gastronomic level. Ikaria is famous for its Panegyri festivals, where hundreds of people come from all over the island to dance together in celebration of the various saints. There is a joyous energy about the Panegyris that stays in your memory long after the night is over. If you need healing, Ikaria might be your place.

The Greek islands have a lot to offer, and I encourage you to visit as many as you can. Go to the clubs in Mykonos, see a sunset over the cauldron in Santorini, visit the art galleries of Hydra, and enjoy fine dining in Sifnos. But after you’ve done all that, visit Ikaria, the island where time stands still, and then tell me your favorite island…

Why You Should Visit Greece in the Winter