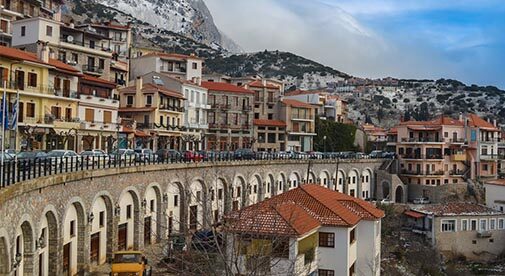 When you think about winter in Europe, you might imagine the Northern Lights in Finland or the Christkindlemarkt in Germany. But it isn’t just Northern Europe that has winter appeal—Greece, the land of summer holidays, has a lot to offer too. From fairytale landscapes to ancient traditions, there is a long list of reasons to come to Greece in the wintertime.

To dispel any myths, despite being a Mediterranean country Greece gets cold weather. There are three main types of climate throughout the country: Mediterranean, moderate, and alpine. The weather varies throughout the 50,000 square mile territory, but no matter where you are, the weather can be cold and wet from November to March. The high mountains of the mainland are colder than the islands, the inland areas have more pronounced seasons than coastal ones, and the south of mainland Greece is warmer and drier than the north. Despite the variances, temperatures can drop to the single digits Celsius throughout the country so if you come to Greece in the winter, bring cold weather clothes. You might even pack your ski gear because Greece has plenty of skiing.

Here are three top winter destinations to visit in Greece:

Described as “the winter Mykonos,” Arachova is a mountain town built on the slope of Parnassos Mountain about 115 miles from Athens. Just a 10-minute drive from the Temple of Delphi, this village with a population of less than 3,000 offers live entertainment in its fireside tavernas, bars, and restaurants, easy access to the Parnassos Ski Center, Greece’s biggest ski resort, as well as horseback riding and hiking. The Parnassos Ski Center includes 19 ski runs totaling 22 miles. The longest run is two-and-a-half miles illustrating that while not the Swiss Alps, Greece offers respectable skiing.

2. Ioannina and the Surrounding Region

Closer to the border of Albania and about 255 miles from Athens lies Ioannina, the largest city in the Epirus region of northwestern Greece. The city is built around Lake Pamvotida, a seven-and-a-half square mile natural lake that creates stunning wintertime images with thick mist rising over its peaceful water. In the middle of the lake lies Ioannina Island, one of the two inhabited lake islands in Greece. Its single village has been designated an example of a traditional settlement. Ioannina also features the Ioannina Castle and the oldest Byzantine fortress in Greece. The combined effect of the castle, the fortress, the lake, and the mountain views gives the city a fairytale feel.

Ioannina can serve as a base to see the surrounding areas of the Zagori village cluster called Zagorochoria.

The Zagorochoria grouping of 46 tiny villages covers about 620 square miles with a population of less than 4,000 people. The area is known for its natural beauty including the Vikos Canyon at the heart of the Vikos–Aoös National Park.  Hiking Vikos Gorge, the deepest gorge in the world, takes about six hours and is a popular tourist activity, but make sure to check the conditions before you set out. As it is only 19 miles from Ioannina, a visit to the Vikos–Aoös National Park makes an easy day or weekend trip.

3. Athens During the Holidays

You don’t need to head north to enjoy a Greek winter, since modern-day Athens offers its own winter attractions. Starting in December, Syntagma (Constitution) Square in the center of the capital is covered in lights and features a brightly decorated Christmas tree. Directly across the street, the elegant Hotel Grande Bretagne announces the holidays by posting two Nutcracker statues in the entrance. For a festive afternoon tea, visit Little Kook. This extravagant, brightly lit, fairytale-themed cafe found in the center of the winding neighborhood of Psirri draws tourists and locals alike. If you want something more classy and cultivated, don’t miss the Sound and Light show at the Stavros Niarchos Cultural Center, about four miles from the center of Athens. A free shuttle bus runs from the center.

While these locations are beautiful, it is the traditions of Greece that weave the whole winter experience together. If you are lucky enough to be in Greece during the holiday season, here are a few traditions you’ll likely see firsthand.

Young Holiday Carolers Clanging their Little Metal Triangles: On the days before Christmas and New Year, neighborhood children form groups to go from house to house or store to store singing Christmas carols and collecting offerings. You can’t miss it as the carolers hold little metal triangles and drums, and while the Christmas carols may differ by region, the lyrics are joyful and wish luck and prosperity to everyone.

The Cutting of the Vasilopita: Vasilopita (St Basil’s Cake) is traditionally prepared for the dinner of New Year’s Eve, but sometimes the cake is cut later in January. Traditionally the vasilopita has a golden coin inside, and the person who finds this coin in their piece of cake is considered lucky for all the coming year. The entire month of January features vasilopita cutting parties and you can join in the tradition by purchasing one from almost any bakery.

Pomegranate breaking: Woven with the mythology of Persephone, the daughter of the goddess of the harvest Demeter, the pomegranate has been the symbol of good fortune, youth, and fertility since ancient times. In Greek tradition on New Year’s Day, a person stands outside the front door of their home and breaks a pomegranate, hitting it hard on the floor so that the seeds spread everywhere, a symbol of luck bringing happiness, good health, and abundance to all members of the family.

While many people come to Greece in the summer, it is only the savvy few who come during the winter. This means prices are lower, and availability is plentiful. Greek philoxenia, friendship to strangers, is part of the experience during all seasons so if you come to Greece in the winter, get ready for a warm welcome despite the cooler temperatures.