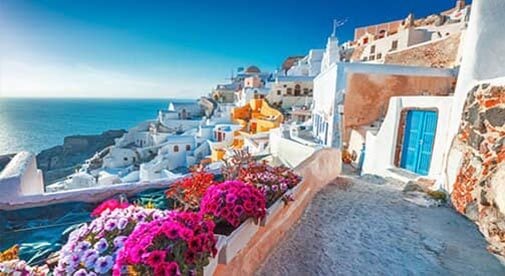 I moved from San Francisco, California to Athens, Greece in 2012, and before my move, I had spent less than 90 days in the country. I relocated alone without family roots or a job waiting for me, so my new life could have gone in a lot of different directions. Eight years later, I’m still here because I love the life Greece helped me to design. And to be fair, while in the balance I’ve had a very positive experience, living in Greece also has its challenges. Below I’ll share the three things I love the most and two aspects that might make you think twice before booking a one-way ticket.

I didn’t realize how much I would enjoy slow mornings and late nights until moving to Greece.  The time scale here is different with a late start and an even later end of your day. For a year I taught a “Rise and Shine” yoga class on Sunday morning at 11 a.m. The name wasn’t meant to be a joke, and both my students and I struggled to make it on time. Brunch can go until 7 p.m., and 8 p.m. is still considered afternoon. This was a big change from my San Francisco life where we were usually done with dinner by 8 p.m. If days run late, so do Greek nights. Nothing beats a hot August night on the town where the tavernas and bars stay open until well past 3 a.m. When a bar does eventually close, it is only after an apology, instructions on how to get to the next place, and a shot of ouzo for the road. If you like late nights and late mornings, Greece will match your rhythm.

They say language follows culture, and the Greek word “philoxenia” meaning “friendship to strangers” is something I experienced from day one. The Greek people, neighbors, and strangers alike, have been extremely warm, caring, hospitable, and kind to me. The family with the tourist shop downstairs from my apartment not only befriended me in the early days but went on to become like an adopted family, even making me the godmother for their newest addition, a baby girl named Alexia. Strangers have been equally warm. During a Sunday road trip in the mountains of Delphi, I started coming down with a cold.  With all the pharmacies closed, the tourist store owner gave me not one tablet but his full package of Panadol. He was worried about me and wasn’t sure when I’d be able to get to an open pharmacy. He didn’t accept my offer to pay him, and in fact, he seemed confused when I tried to give him money. When Greeks give, it’s from the heart.

Greece is a Hub for Both the East and the West

I love that within two hours and with less than €100 I can easily immerse myself in different cultures, languages, and time zones. Italy is a two-hour flight away, the United Kingdom and Sweden are both under four hours by plane and if you want to leave Europe, Turkey, Lebanon, and Israel are all in easy proximity. My first year in Greece I went to Beirut for a long weekend. From my San Francisco vantage point, Beirut always seemed totally out of reach but from Athens, it is less than two hours by plane. I learned many things that weekend: the Lebanese speak French as well as Arabic, the ATMs disburse U.S. dollars and Lebanese pounds, and the Lebanese food is a lot like Greek cuisine but with more spices.  If you want an education of the world, Greece can make that possible for you.

These are just three of the three hundred things I love about Greece, but I would be remiss if I didn’t mention the challenges.

When I first moved to Athens, I couldn’t understand why my Greek friends were constantly meeting with their accountants. What could they possibly be talking about that required monthly meetings? But eight years later, it all makes sense…  Greek tax law is a kaleidoscope of constantly changing rules and regulations which often contradict each other. Basic things like a regular annual tax filing date don’t exist. In the U.S., your individual return is due on April 15th, the same date it has been due since 1954. But in Greece, the filing deadline changes every year, influenced by who runs the government, summer holidays, and a myriad of factors that are impossible to predict. This inconsistency isn’t limited to tax law. De-centralization runs rampant in Greece, and a government agency in one neighborhood might follow different guidelines than that same agency several streets over. This can be good or bad depending on your temperament and situation, but in all events, it makes it hard to predict outcomes.

You can live in Greece for less than $1,000 per month and that is true because most of the country earns less than that per month. If you need to earn your living in Greece, opportunities are limited, and wages are low. The minimum wage works out to be about €4.23 ($5.03) per hour, and unemployment hovers between 15-17%. With the Covid-19 pandemic, this is likely to get worse since at least 20% of the country’s GDP is based on tourism. The most ideal way to live in Greece is to make your money outside, either through an online business or passive income. Living in Greece is wonderful, but earning a living in Greece is difficult.

Challenges aside, Greece is a special country, and people who move here rarely come for logical reasons. They’re drawn by an emotional response. Home isn’t a place, it’s a feeling and despite its drawbacks on a practical level, Greece touches your heart and can make you feel like finally, you are home.