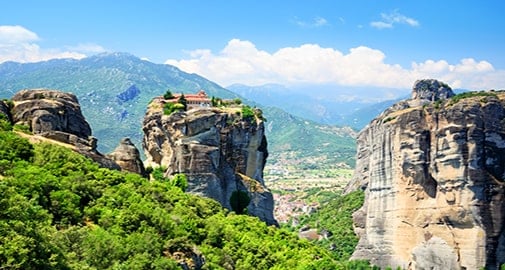 As my husband, Shawn, and I hiked through Meteora’s verdant landscape, scarlet cherries, plump mulberries, and graceful butterflies vied for our attention. We almost stopped to pick a handful of the tempting fruit. However, we were persuaded to continue hiking when we caught our first glimpse of the St. Nicholas Monastery. The medieval stone structure was precariously perched on top of a column of grey stone. Next to the monastery, Greek and Byzantine flags fluttered in the breeze.

The St. Nicholas Monastery is one of Meteora’s six active monasteries. More than 500 years ago, monks built 24 Eastern Orthodox monasteries atop inaccessible peaks in this part of central Greece. Today, Meteora is as renowned for these spiritual structures as it is for its unique geological formations. In Greek, the name Meteora aptly translates to “suspended in air.”

Hermits in search of solitude found refuge in Meteora’s caves as early as the 10th century. Over the centuries, Meteora gained a reputation as a center of monastic life.

As Ottoman invasions became more of a threat, Meteora’s monoliths became an attractive place for monks to construct even more sophisticated places of worship.

To build the monasteries, the monks had to hoist stone and other materials to the top of these rocks. Since the monks wanted to keep invaders out, they couldn’t carve stairs—even for their own access. Instead, they used removable ladders. The men also rode up and down inside nets that were lifted using a hook.

By the 16th century, funding from near and far allowed for the monasteries to be built. This age of development wasn’t to last though. Eventually, a lack of finances—coupled with exposure to the elements—caused many of the monasteries to be abandoned. It wasn’t until the 20th century that Meteora’s monasteries had a rebirth, partly in thanks to tourism. In 1988, UNESCO added the Meteora monasteries to its World Heritage List.

In recent years, Meteora has become one of the most popular destinations on the Greek mainland. Currently, a small number of monks and nuns reside in six of the area’s monasteries; these monasteries are open to the public.

When you explore Meteora, you’re also bound to see a handful of monasteries that are no longer inhabited. Some of the structures are restored, while others are in a ruined state.

While each monastery has unique characteristics, one similarity is the presence of a katholikon, or central church. All six monasteries also have extraordinary views of neighboring rock formations and monasteries.

Below, you’ll find an overview of the six active monasteries. There are also recommendations for how to get to Meteora, what you can do in the area, and the guidelines you need to follow to enter the monasteries.

Great Meteoron is Meteora’s largest, oldest, and highest monastery. It was founded in the 14th century by Saint Athanasios.

Known as Megalou Meteorou in Greek, the complex is perched on a rock formation that’s about 2,010 feet above sea level. Great Meteoron’s church is decorated with ornate, 16th-century frescoes. There’s also a kitchen, with a well-used brick oven, pottery, and wooden barrels. The monastery ossuary—whose shelves house the skulls of former resident monks—is a macabre, but historic, feature.

The Monastery of the Holy Trinity

The Monastery of the Holy Trinity (Agia Triada) has 14th-century origins. But, in the 20th century it achieved Hollywood renown. In 1981, it was featured in the James Bond movie, For Your Eyes Only. Supposedly, actor Roger Moore—as well as his stunt double—had to overcome a fear of heights in order to get the necessary shots of James Bond climbing and then tumbling off the cliff.

Beyond its Bond fame, Holy Trinity also has a folklore museum. In another part of the monastery, you can also see an example of the pulley and rope netting that Meteora’s monks would’ve once used to access the monasteries.

As you peek over the edge to the ground far below, imagine what it would’ve been like riding up inside a net. Today, monks either use cable cars, elevators, or stairs (carved in the 20th century) to access Meteora’s monasteries.

Named after the hermit who once lived on the rock on which it’s built, Varlaam is Meteora’s second-largest monastery. Varlaam once housed workshops for bookmaking and gold-embroidery.

As you explore, be on the lookout for a centuries-old wooden barrel, which once held water.

The Monastery of Saint Nicholas

Saint Nicholas Monastery (Agios Nikolaos Panausas) is located near the village of Kastraki, not far from some of Meteora’s ruined monasteries. The structure was built on a narrow rock surface, which required that the monastery have multiple levels.

Theofanis, an accomplished artist of Cretan origins, is believed to have painted the frescoes inside the church’s interior.

Roussanou, unlike Great Meteora, St. Nicholas, Varlaam, and the Holy Trinity, is now a convent that’s home to several nuns.

Built on a small plateau, Roussanou has a few enclosed balconies that hang over sheer drop-offs. The construction you see today dates back to the 16th century, but it’s believed that older structures existed here before that time.

The Monastery of Saint Stephen

Saint Stephen’s, like Roussanou, is home to several nuns. Parts of the complex twice suffered war damage—first during World War II, and then during the Greek Civil War.

Saint Stephen’s is accessible by a bridge, which differentiates it from the other monasteries and their many stairs. This feature makes the monastery especially attractive to visitors with limited mobility.

Meteora is located in the region of Thessaly, about 225 miles northwest of Athens.

Kalambaka and Kastraki are the most popular places to stay. Since hiking was high on our agenda, we stayed in tiny Kastraki, which offers easy access to hiking trails. We had superb views of several rock formations from the terrace of our guesthouse. Many travelers only make a day-trip to Meteora, but I’m pleased that we spent a few nights to see the sights.

While the monasteries alone are a worthy draw, there’s much more to do in the area, including hiking, biking, rafting, rock climbing, wine tasting, and even truffle hunting.

Meteora’s monasteries are an important spiritual destination for Orthodox Christians, so you must be dressed appropriately in order to enter the monasteries. Sleeveless shirts are forbidden for both men and women. Men are required to wear long pants, and women must wear long skirts.

The six monasteries are open year-round. However, the monasteries’ opening hours alternate, and they aren’t all open on a given day. To ensure the monasteries you wish to visit are open, it’s best to check with the Kalambaka Tourist Center. Note that all of the monasteries—with the exception of The Monastery of Saint Stephen—have a considerable number of stairs.

Crete and Corfu: For a Healthy, Simple, Greek Island Retirement

The 5 Most Picturesque Greek Islands