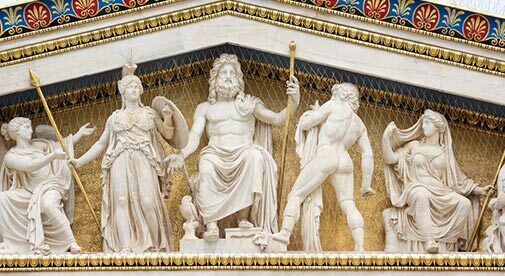 If you grew up reading stories of the Greek gods and myths, a visit to Greece won’t disappoint you. From the twelve gods who sat on Mount Olympus to the Oracle of Delphi, Greek mythology captures not just our imaginations but our hearts as well.

Unlike the heroes and saints in Christianity, the Greek gods are more like us—messy, dramatic, emotional, and flawed. It’s no wonder we love hearing their stories and adventures. And one of the best things about visiting Greece is you can go to the actual places featured in Greek myths. Let’s explore a few below.

The Minotaur and the Labyrinth (Knossos, Crete)

When visiting the island of Crete, make sure to go to the Palace of Knossos, the ancient city of the Minoans, and the home of the Minotaur. Knossos is located three miles from Heraklion, the capital city of Crete.

As the myth goes, King Minos of Crete angered Poseidon, the god of the sea and as punishment, Poseidon schemed to have the king’s wife give birth to the Minotaur. The Minotaur, a monster that was half-bull, half-human, was so ferocious that King Minos, following the advice of the Oracle of Delphi, built a gigantic labyrinth to contain it. As part of a tribal feud, King Minos required seven Athenian young men and seven maidens to be sent as a sacrifice every year into the Labyrinth to be eaten by the Minotaur.

When one of these annual sacrifices approached, Prince Theseus, the son of the King of Athens, volunteered to be one of the seven young men to be sacrificed with the secret plan to slay the monster. To add to the drama, King Minos’ daughter, Princess Ariadne, fell madly in love with Theseus and helped him navigate the labyrinth. Theseus was successful in killing the Minotaur, and as part of his heroic getaway, he took Ariadne with him to the island of Naxos.

What You’ll See Today in Knossos

While the ruins of Minos’ palace at Knossos were discovered, the labyrinth itself never was. Still, the Palace of Knossos is impressive. The archaeological grounds are one of Crete’s most important sites, and Knossos has been referred to as the oldest city in Europe, dating back to 2,000 B.C.

The Palace at Knossos was built on a large scale, originally with over 1,200 rooms, and there is a lot to see beyond the major attractions like the Throne Room and the Horns of Consecration. There are shrines, frescoes, and halls almost everywhere you turn, and this is one place I recommend you book a guided tour. There is a lot of history and mythology woven into this site, and a 90-minute tour with a good guide brings it to life. Guided tours can be organized in advance or at the ticket office when you arrive.

The Love Story of Ariadne and Dionysis (Naxos)

The story of Theseus and Ariadne continues on the island of Naxos. Naxos, an island in the South Aegean Sea, 111 miles by boat from the Athens port of Piraeus. The island is known for beautiful beaches, charming mountain villages, and water sports including kitesurfing and windsurfing. Rich in mythology, visitors today can still see the remnants of the Temple of Apollo and the entry to the temple, the Portara, near the beach where Ariadne was abandoned.

The ancient myth goes that Theseus and Ariadne stopped on the island of Naxos while fleeing Crete after Theseus successfully killed the Minotaur. Exhausted, Ariadne fell asleep on the shore while Theseus and the crew remained on the boat. While sleeping, Dionysis, the god of wine and merriment, visited Theseus in a dream and told him that Ariadne had been reserved by the Fates to be Dionysis’ wife. Fearing the wrath of the gods, Theseus woke up while Ariadne was still sleeping and snuck away with his crew, leaving her abandoned on the beach. Dionysos, already in love with Ariadne, married her, and they stayed in Mount Drios (present-day Koronos) on Naxos before relocating to Mount Olympus, the home of the Twelve Gods.

What You Will See Today in Naxos

If you arrive by ferry, you will be greeted by the remnants of the Temple of Apollo and its striking entryway structure, the Portara, situated on the islet of Palatia where Ariadne was abandoned. The Portara is made up of four marble columns weighing about 20 tons each. Because it is set a bit away from the main part of the harbor, it has a magical feel, and it’s easy for your imagination to conjure up the myth of Ariadne’s love story.

Mount Olympus, the highest mountain in Greece, is in the Olympus Range about 273 miles from Athens. Mount Olympus has 52 peaks and at its highest point, it stands 9,570 feet above sea level. Because it is so high, many of the peaks are snow-capped for large portions of the year, giving the mountain range a mythical feeling. It is here that Ariadne and Dionysis took up their permanent residence.

Mount Olympus is the legendary home of the gods and according to myth, the mountain was created after an epic battle between the Titans (the ancient gods) and the Olympians (the newer gods). The Olympians won and all twelve Olympian gods took up residence in Mount Olympus including Zeus, Poseidon, Hera, Demeter, Athena, Artemis, Apollo, Ares, Aphrodite, Hermes, Hephaestus, and Dionysis. Many lesser gods also lived on Mount Olympus, and at the base of the mountain resided the nine muses. These muses were responsible for history, poetry, comedy, dance, astronomy, and other arts.

What You Will See Today at Mount Olympus

Today, visitors flock to Mount Olympus to take in the flora, fauna, hiking trails, and mountain peaks with gorgeous views. The 92-square mile surrounding area referred to as the Olympus Biosphere Reserve was the first Greek National Park and features over 1,500 plant species, 100 species of birds, and 25 species of mammals. The area offers a spectrum of hiking options from easy, day-trip trails to a full multi-day trek from the base to the top of Mount Mytikas, the highest point. The starting point for climbing Olympus is the town of Litochoro, on the eastern foothills of the mountain.

Many of the famous myths from Greece revolve around the prophecies of the Oracle of Delphi. The Oracle, also called the Pythia, was a high priestess from the temple of Apollo, the god of sun and light.

Rather than a single person, the Oracle itself was more like a religious institution, and there were times when multiple oracles were working at once. The job of the Oracle was to channel prophecies from Apollo, and from kings to peasants, everyone wanted to hear the Oracle’s prediction and get her advice. But her prophecies were often cryptic and open to interpretation such as the famous “If Croesus was to cross the river Halys he would destroy a great empire.” He did, but it was his own…

What You Will See Today in Delphi

The village of Delphi lies about 113 miles from Athens. The village itself is quaint featuring restaurants, tiny hotels, tourist shops, and gorgeous views of Mount Parnassos hills. About a half a mile from the village itself lie the ancient ruins. The ruins themselves offer you three distinct places to visit:

The 14-room archeological museum features a cauldron, similar to the one the Pythia was rumored to stare into to get her visions and prophecies. The Athena Pronaia is the most famous structure and the most photographed image of Delphi. Be sure to bring comfortable shoes because the main site is quite large featuring things like the Temple of Apollo (where the Pythia offered her cryptic, prophetic messages), the Athenian Treasury, an ancient stadium, and a path called The Sacred Way. The village and ruins feel magical, and a trip to Delphi is one of my top recommendations for people visiting Greece who really want to connect with Greek mythology.

These are just four of many places you can visit to connect with ancient Greek mythology on your trip to Greece. The mythology is quite alive here and don’t be surprised if your tour guide is named Athena, Aphrodite, or Ares, all common names in Greece today. Greek mythology is interwoven with Greek culture and when you visit, you really will feel you are in the land of the gods.