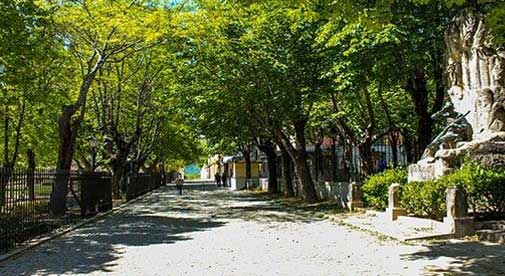 High in the Guadarrama Mountains, El Escorial is a much-loved escape from the heat of Madrid. ©Sean Keenan.

I’d never really noticed the starlings flitting between the chestnut trees of El Escorial before. For 10 years, this genteel pocket of central Spain was my go-to location for groceries, fuel stops, evenings out, and Sunday strolls in the formal gardens of its imposing 16th-century royal palace.

Now, sipping an iced coffee at an outdoor table on the pedestrianized walkway of Calle San Lorenzo, I’ll admit that I’m kicking myself a little. Dappled by the young leaves of old trees, that world-famous Spanish sunlight casts a dancing pattern on the honey granite walls and oak lintels of the street. It picks out the patterns of grapevines trained along the sides of cafés, and the subtle indentations worn into the stone paving slabs by generations of feet. Overhead, those starlings chatter and squabble.

Established in 1557 by King Felipe II as a royal retreat away from the beating summer heat of Madrid, the conjoined towns of El Escorial and San Lorenzo fulfill a similar function to the present day. At 3,400 feet above sea level, the temperatures here are more moderate than in the capital, some 26 miles south. Summer highs can go well into the 80s F, and in the depths of winter you might have to endure a couple of days of snow, but for the most part, the weather here is bright and clear. Humidity levels are low, so the heat is tolerable when the mercury rises. That’s the reason why El Escorial and San Lorenzo elicit envy in this part of the world. Cabinet ministers, millionaire soccer players, and multiple generations of the Spanish royal family make their homes here, at least between May and October.

Naturally, that pushes up the price of real estate. It would be foolhardy indeed to claim that this is a budget destination. That’s not to say that there aren’t bargains to be had nearby. In a village just 10 miles across the mountains, where I used to live, you can still pick up a three-bedroom fixer-upper for under $100,000, deep in the leafy hill country of the Sierra de Guadarrama, but with a direct train connection to both Madrid and Avila cities. It’s country living, but with lively bars, restaurants, hiking trails, river swims, and raucous fiestas. I’ll admit, I miss it a little. (It’s called Santa Maria de la Alameda, if you’re tempted.)

El Escorial is a different style of living though, and one which comes with an elevated price tag. Along with Sitges, near Barcelona, and Marbella on the southern coast, this is one of Spain’s most exclusive neighborhoods. Tucked into a south-facing nook under the looming bulk of Monte Abantos, the town is dominated by the copper-clad domes of the Royal Monastery. Felipe II was famously ascetic, and decreed that his palace should be discreet, godly, monastic, and free from the decadent opulence that would distract him from his religious devotions.

Well, that’s a relative matter. Strolling around the palace museum (and it is a palace too, rather than just a monastery), you’d be forgiven for thinking the collection of masterpieces by names such as El Greco, Bosch, and Brueghel (not to mention the dazzling arrays of New World gold dripping from every surface) stretch the definition of understated modesty somewhat. But such is the way of kings. 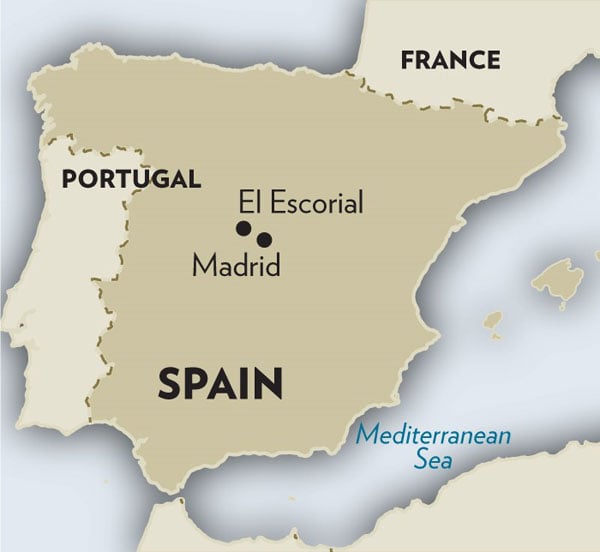 Technically, San Lorenzo de El Escorial refers to the mighty monastery/palace complex at the top of town, and El Escorial comprises the districts below. El Escorial has the useful amenities and modern infrastructure, whereas San Lorenzo gets the cobblestone alleyways, cast-iron bal conies, and way more high-end shoe shops than seems necessary for a town of just over 15,000 residents.

If San Lorenzo is pretty, El Escorial could be better described as handsome. Streets here are wider, the buildings are more stately, parks and gardens are on a more grandiose scale. Really, making a distinction between the two towns is nit-picking. You could walk between them both without ever noticing you’d done so.

The entire urban area of both towns combined spans about a mile, so distinctions between one and the other are really not worth worrying about. In purely practical terms, the only noteworthy difference is that the bus station with regular connections to Madrid and beyond is in San Lorenzo, whereas, if you choose to travel the 26 miles to the capital via the equally well-served railway station, you’ll need to stroll down to El Escorial.

In the upper reaches of San Lorenzo, where hiking trails snake up through pine forest to the granite summits of Abantos, the mountain air is infused with the scent of wild thyme. In April and May, wildflowers burst from the surrounding pastures, and the high-rise towers of Madrid are visible across the flat plain and reservoir lakes that fan out south of Escorial.

Here, mansions with vast pools and gardens hide behind mighty security gates and fetch prices in the eight-figure range. (A dilapidated 5,500-square-foot 16th-century palace, with a 1,000-square-foot gatehouse, is currently on the market for the bargain price of $1,700,000, but you’ll need to put at least as much into the renovation project. See: Fincasabantos.com) The same sort of prices are typical in the Carlos III district, tucked between mountain slopes, the palace buildings, and the Royal Golf Club of La Herreria. If you wish to be neighbors with Spanish politicians or a dowager heiress, you’ll have to cough up the big bucks. But you’d be living on the outskirts of town, and even if both locations are fancy, they’re a stiff walk to the nearest café, bar, or grocery store.

For a more convivial experience, the best approach is to embrace the flurry and fun of Spanish street life, and look for a condo in the center. There, you can enjoy the postcard-pretty parks, the palace gardens, the Old World ambience, and the urban energy of town…while still being within walking distance of the mountain trails and valley paths on the outskirts. Plus, you’re closer to El Escorial’s many amenities. Supermarkets, big box stores, railway connections, sports complex, casino, theater, symphony hall, restaurants (Japanese, Italian, Mexican, and, of course, Spanish), and hospital are all in town, so it makes sense to be near those.

(A special mention goes to El Escorial hospital, a municipal facility with excellent staff and equipment. When I broke my ankle in 2015, they whipped me immediately into a two-bed ward, despite it being a Saturday, and fitted pins and a plate the next morning after a series of X-rays, MRI scans, and specialist consultations. The surgery and aftercare were exemplary, and despite having shattered two bones, these days I have no hint of a limp. Spanish hospitals, admittedly, don’t have the hotel-like appearance of their U.S. equivalents, and they can seem a little dated, but where it matters, they’re outstanding.)

Within five minutes’ walk of San Lorenzo’s 19th-century indoor produce market is an 860-square-foot, two-bedroom condo in the historic district. The narrow streets in the area aren’t useful through-ways for commuters, mean ing that there’s not much traffic in the evenings or early mornings. Its bright kitchen is a splendid spot for breakfast in the morning sun, or relaxing in the late evening warmth of summer. Although you might want to spend some money on updating the kitchen and bathroom, the condo would make a comfortable home, and a potentially lucrative property to rent out. Rentals in El Escorial are perennially in demand. It’s on the market for $156,000. (See: Jovy.net).

Just off El Escorial’s main ring road (meaning it’s got quick access to the A6 highway to Madrid), in a three-floor apartment building with views of the open countryside sweeping down to the capital city, is a modern three-bedroom, two-bathroom duplex on the two upper floors (it has an elevator). Bedrooms have the angled ceilings of loft living, but headspace is ample. Floor space runs to over 1,000 square feet. Balconies on the south side look out over natural vistas and the surrounding area is home to stores, bars, and restaurants within two blocks. A nice touch is the use of skylights throughout, giving this well-finished property ample natural light. It’s on the market for $206,225. (See: Isabelguisado.es)

Slightly outside of town, in a residential development close to the supermarkets and sports center, is a modern property in a low-rise block set on extensive shared garden space. Residents have the use of the garden space, as well as the onsite community pool, tennis courts, bar, and social club. The property is bright and airy, with four bedrooms, two bathrooms, and a spacious living room/dining area. Kitchens in Spain tend to be an afterthought, but this property is the exception to the rule, with an independent kitchen with adequate space. To be honest, the property could do with a cosmetic overhaul. At the moment, the décor is outdated and a lick of paint would work wonders. That aside, it’s a very good deal for its location and is on the market for $212,000. (See: Jovy.net)

Even though this is a high-end town, in many ways the exception to Spain’s usual status as one of Europe’s most affordable destinations, in day-to-day terms San Lorenzo and El Escorial are surprisingly economical to live in. Sure, you’ll pay top dollar in the touristy bars and restaurants beside the monastery or in the outdoor terrace cafés that flank the pedestrianized Plaza de La Constitution. They’re used to making the most out of the tour bus crowds, and paying as much as $3 for an espresso is the price for being in the epicenter of all that genteel prettiness.

Take a stroll just a few hundred yards from the obvious tourist traps, though, and you’re back among workaday establishments where a glass of local red wine costs less than two dollars, a three-course lunch with wine and coffee goes for $12, and an espresso shot costs just $1.50. Lidl, Sol, and Carrefour supermarkets on the east side of town sell all the staple groceries at knockdown prices (it’s hard to beat Lidl’s wine selection, with bottles of decent Rioja for less than $2, or Carrefour’s half-pound bundles of asparagus for $1).

If you’re more inclined to rent a home, be aware of the Spanish convention in which the renter is expected to pay a refundable deposit to the value of a month’s rent, as well as another month’s rent in advance, and—the one that comes as the biggest shock to the system—an agent’s fee of another month’s rent. That said, there are some nice rental properties available. One caught my eye on a quiet side street in the heart of San Lorenzo’s historical district (and about 200 yards from the Royal Monastery). For $840 a month, you get two bedrooms and two bathrooms, plus a large living/dining room, spread over 1,125 square feet of recently renovated living space. It’s an affordable way to live in this atmospheric, historic, and pretty royal nook of the Spanish meseta.