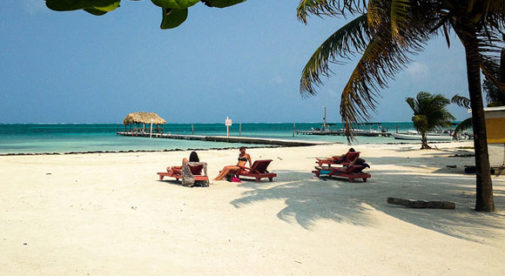 Diana Moore and Tim Nutley are thrilled to be living on a Caribbean island. “Our lifestyle now is ‘chillaxed’, as people here say. We are no longer working long hours and then trying to get everything done on the weekend,” says Diana. “We like living here for simple reasons. The atmosphere is awesome. No one is in a hurry. There are no automobiles here. We get around on bikes. So there’s no polluted air or road rage.”

Prior to moving, Diana (48) and Tim (52) had spent most of their lives in Indiana, a 30-minute drive south of Chicago. Tim worked as an operating engineer. Diana was in the HVAC industry. During the week they worked long hours. Weekends were spent catching up on home maintenance projects and a list of errands. Little time was left to socialize with friends and neighbors…and year after year they braved it through the frigid winters…

In 2011, Diana and Tim took their first vacation to Belize. On their second trip they visited the charming island of Caye Caulker. Diana says, “We fell in love with this quaint island.” And they realized they could adjust to this type of lifestyle. After a few more vacations they moved fulltime to the island with Ruben, their pet Chihuahua.

Why Belize? Diana explains, “The climate was on the top of our list. We had had enough of dealing with the hard Chicago winters. English is the main language. The people on the island are friendly. And when you need it, someone will help, or point you in the right direction.”

Diane and Tim relish their natural surroundings. “This is a very simple way of life. We have come to appreciate low-key living. We’ve really slowed down. We take in the terrific water, birds, wildlife, and plants. Going out on the veranda in the morning and seeing pelicans flying above never gets old.”

Their quality of life has skyrocketed since they moved. “We’re more active, eat healthier, and feel much more fulfilled living here,” says Diana.

Tim likes to get up early some mornings to go fishing. Diana takes Ruben for a bike ride on Front Street. And they find plenty of ways to stay busy. “We go swimming, snorkeling, and fishing. Evening bike rides are enjoyable. By night it’s cooled off and the winds have picked up, bringing a refreshing breeze. After dark you look up and see more stars than you can imagine.”

With the help of their island friends they were able to locate a great deal on a furnished two-bedroom apartment for $650 a month. (Most rentals on Caye Caulker run $1,000 a month, or more.)

Their diet includes plenty of fresh food, some of which is free. Tim does pretty well when he fishes. Says Diana, “Tim cleans and fillets the snapper or grouper he catches himself. We cook the fresh fish for lunch or dinner. Fruit is cheap and fresh. We have banana and coconut trees in our yard.”

They take advantage of the tasty, well-priced food options available on the island. “We eat often at the vendors on the street. Burritos are $1.50, tacos 50 cents, and pizza $10. Breakfast is around $2.50. Most of the time we order just one plate and split it since the restaurants give large portions.”

Caye Caulker’s tight knit community also appeals to them. “The people here take care of each other. Everyone is friendly. They say good morning and good evening, even if you are a stranger,” says Diana. “Back home you would be lucky to get a smile from someone. In Indiana everyone was in too much of a hurry.”

These days they have plenty of time to socialize. “We couldn’t be happier with our social life. We have more friends here than we did back in the States. Sometimes we get up and go swimming in the sea, have a few afternoon cocktails, and meet up with our friends at the Sports Bar to catch up. And we have time to help out friends and neighbors.

“If I had to do it all over again I would have done this sooner,” says Diana. “But we are here now and that is all that matters.”