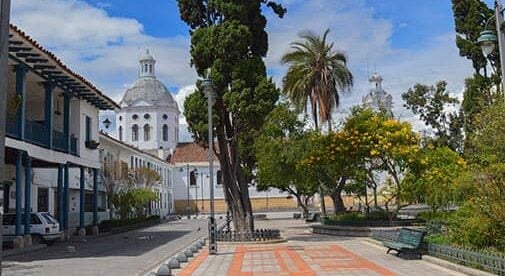 Sophisticated and cosmopolitan, Cuenca also has its pockets of serenity for a relaxing break.

Walk by 9-52 Simón Bolivar in downtown Cuenca, Ecuador on any given day and you’ll pass the historic emerald green and cream ceramic China House, where a handsome, stylish man stands on the wrought iron balcony looking down at you. Like many who pass the building, you might wonder “Why is he standing there and who is he?”

Cuenca expat and photographer Jane Hiltbrand was captivated by the colorful Art Nouveau style façade, as well as its mysterious man on the balcony, and did more than just wonder. She went inside the China House and started photographing the polychrome brass designs on the ceilings and walls and climbed the wooden staircase to the second floor, where the mystery unraveled. The man in the window turned out to be a mannequin modeling one of David Anthony’s handmade suits, which he can pound out in only five days at his China House trajes para hombre shop. Jane also learned that the China House earned its popular name due to its elegantly decorated frontage, which is clad from top to bottom in pieces of china.

Jane’s passion for historical buildings began at a young age, when her parents rented a historic carriage house on The Narrows by the Hudson River in upstate New York. “It was an amazing place to grow up and gave me an appreciation of the history a house holds,” Jane says. Her mother worked at Life magazine and growing up learning about photography and the distinctive architecture of the carriage house instilled Jane’s love of both art forms.

“I never forgot my childhood exposure to historical buildings, nor my love for architecture. But I decided pretty early on that I didn’t want to earn a living with photography—I didn’t want to have the burden of photography being a job. I wanted to keep it as a pure pleasure.” So instead, Jane started out working in television advertising, and then became a real estate broker in Scottsdale, Arizona, and Santa Fe, New Mexico. Nevertheless, her interests still found some expression in her work: “Whenever possible in my real estate career, I tried to specialize in historic or vintage properties. So, these have been my two special loves for a long time: photography and historic architecture,” adds Jane.

When the housing market collapsed in 2008, and real estate sales took a nosedive, Jane started looking for alternatives to retiring in the U.S. It was something she’d long contemplated, but the economic situation at home helped the decision along. “I knew I wanted to retire out of the United States but not where,” she recalls. “I started reading and heard about Cuenca.”

Jane took two exploratory trips to investigate Ecuador, and landed up in Cuenca, the undisputed cultural capital of the country, a scenic colonial Andes mountain town sitting at 8,400 feet elevation with a population of 450,000, crossed by no fewer than four rivers. “The moment I drove into Cuenca, it was love at first sight. You’re in this old, historical, architectural place and living in the middle of it was very appealing to me.”

Jane retired to Cuenca in 2017. She’d done her financial projections, totted everything up and realized that, although she could afford to retire in the States, doing so wouldn’t be as much fun as moving to Ecuador. “I would mostly be paying bills,” she notes. “After the real estate crash in 2008, retirement wasn’t going to be what I thought it was. One thing I wanted in my retirement was affordable travel. That’s definitely available here in South America, and there’s so much to see. I have already traveled to Peru, Chile, and Patagonia,” Jane adds. “Staying home is a pleasure, too. I fell in love with Cuenca because of its gorgeous architecture and also the friendliness and warmth of the Ecuadorian people.”

The cost of living is low all over Ecuador. Cuenca, in particular, is an easily walked city, and public transportation is 35 cents for a bus or tram ride. Taxis are $3.50 to get most places in town. Most expats don’t own a car. This high in the Andes, utilities run around $50 a month because you don’t need air conditioning or heating; and, because propane, used for hot water and the stove, costs $2.50 a canister, there’s not as much need for electricity. Rents run between $350 and $650 for a two-bedroom, two-bathroom condo, depending on the size and location. It means that many Cuenca expats find they can live very comfortably on $2,000 a month and still have enough for travel, social life, and to enjoy the busy arts scene.

I knew straight away this was the city for me.

“The first weekend I was here there was a party for the opening of the newly restored Casa Museo Remigio Crespo Toral, the historic house which once belonged to the Ecuadorian poet, Remigio Crespo Toral. There were beautiful young Cuencana women modeling period clothing for the opening reception, the museum was jam-packed with people, a lot of them older wealthy Cuencanos. There was a classical music concert in the auditorium, and a jazz band playing in the café in back,” notes Jane. “I knew straight away that this was the city for me.”

Like a lot of expats who come to Cuenca, being able to live well without the pull of a high-pressure job left Jane with time to rediscover passions that had been parked while she focused on her career. When she moved into the post-career phase of her life, Jane reignited the photography skills she’d honed at Boston College, where she studied photojournalism as an undergraduate. She strung her camera around her neck like a valued piece of jewelry and logged miles walking in Cuenca’s historic district, photographing not only the French façades and classic Spanish architecture but also the ornate interiors and courtyards hidden behind the unassuming wooden doors of the most famous buildings in the city.

The buildings of Cuenca fascinated Jane and inspired her to become a “visual storyteller” using her photographs to capture the stories, both past and present, of the 16th-century Spanish colonial and 18th-century French Republican architectural structures in Cuenca. That rich, and rare, environment is part of the vibrant cultural package which earned the city its UNESCO Heritage site designation.

“I enjoy the idea of photography being a record of a moment in time. It might be why I enjoy looking at old historic photographs so much,” explains Jane about her inspiration. “More than anything else, it gives you a good idea of what life was like 100 years ago, or 50 years ago, or even last week.”

Jane’s family have visited her, and one of her sisters was so impressed by the city that she, too, moved to Cuenca. The two now live side by side in a duplex. Jane’s sister encouraged her to start a visual history blog, Architecturalcuenca.com, stating, “You were born to do this.” Encouragement came from elsewhere, too.

“My Spanish teacher, Cristina Flores Ortiz, gave me a copy of a guide to Cuenca architecture, written in Spanish,” says Jane. “It covers 165 historical properties. The original guide only has exterior photos, but I’ve been attempting to take interior photos of these buildings. I try to share a little bit of the history involved also. I sometimes post old historical photos, if I am able to find them.”

Although the pandemic slowed her progress in photographing the city’s buildings, Jane feels the pause during quarantine gave her the time to create the blog and study the history of the local architecture. She’s particularly interested in the French influence on Cuenca’s buildings, which is a rare feature in South America, as the continent was mostly colonized by the Spanish and Portuguese.

And, like the man standing in the window at the China House, Jane is a constant observer of life in Cuenca. An expert interpreter chronicling Cuenca’s history through her photography, which captures the past and combines it with the present. Her visual storytelling creates memories of stories from times past and instills in us expats that we too are a part of the city’s rich history.

FRENCH FLAIR IN A SOUTH AMERICAN CITY. WHY?

Cuenca’s dance with the French began in 1736, when the French Geodesic Mission came to Ecuador with the purpose of measuring the roundness of the Earth. The process involved measuring the length of a degree of latitude at the equator, which bisects the country and gives it its name (“Ecuador” in Spanish means “equator”). Hearing that Cuenca was a city favored by both Incas and Spanish as “the jewel of Ecuador,” the French traveled south to Cuenca on vacations from their expedition in Quito. Cuenca’s high rollers were so impressed by the flamboyant French that they deemed their society as the most elegant in the world and soon adopted aspects of its culture as their own. Soon, upper-class Cuencanos were plastering French Republican façades over their Spanish colonial exteriors, building French-inspired parks around town, buying Louis XVI furniture, and sending their children to French schools abroad.

This era had a profound effect on Cuenca and was instrumental in turning it into the cultural capital of Ecuador. The city now boasts a bustling downtown, modern conveniences, a renowned flower market, indigenous textile markets, and the famed three baby-blue domes of the Cathedral of the Immaculate Conception (situated on the corner of the French-inspired town square, Parque Calderón). Tourism over the past five years has increased by 30%, and Cuenca has become a popular destination because of its mix of Inca, Spanish, and French cultures, as well as a downtown boasting more than 300 restaurants and blocks of chic shops tucked into the delightful historical architecture.

5 Reasons To Move to Cuenca… And 2 Not To