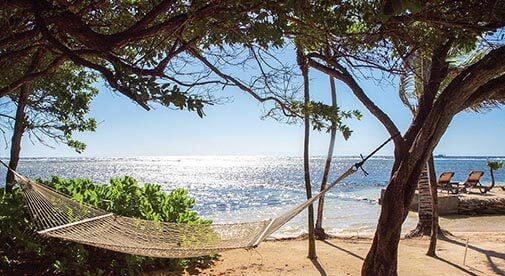 A millionaire’s lifestyle in Roatán is available for a fraction of the usual Caribbean cost. ©Jason Holland/International Living

The Caribbean’s Bay Islands can aptly be described as bijou: Compact and quaint, they cut an elegant form of tropical island. Few outside of the diving community have heard of them. Which is a crying shame considering how much more than just underwater adventures they have to offer.

But let’s start with that scuba scene. This is one of the most ideal places to learn how to take those first breaths underwater, or indeed, to continue training. Its waters are warm, most often crystal clear, and packed with an impressive array of sea life, from the world’s largest fish, whale sharks, right down to micro animals such as seahorses and emblazoned fire worms.

Perhaps the best reason for diving here, is that the Bay Islands are well known among the scuba community to be one of the cheapest places in the world to take diving courses. As a qualified PADI instructor, I would never suggest you take the plunge with the cheapest dive shop, but even the most expensive schools on-island are still cheaper than anywhere else on this blue planet.

Fly directly to Roatán from Miami or Dallas.

Now, if you’re not already a diver, you’re probably wondering where this underwater oasis can be found. The two main islands are located approximately 30 miles off the coast of Honduras; a country that has regrettably seen its fair share of upheaval over the past few years. However, the Bay Islands are a world unto themselves, rarely unsettled by the mainland’s political problems. And, you can fly directly into the largest island, Roatán, from Miami or Dallas.

From the air, Roatán looks like a 40-mile-long evergreen bush circumscribed by dazzling pearl. Dense vegetation blankets the undulating landscape, a safe haven for tropical wildlife such as opossum, white-tailed deer, monkey, and sloth, all of which roam freely. The bedazzling beaches are home to hawksbill turtles looking to lay their eggs, and the occasional human who has concluded a successful search for secluded perfection.

Anybody who gets bored of laying around on their own private stretch of sand and occasionally dipping a toe in turquoise water, can head inland for an ATV quad bike adventure (with or without tour guide), harness into a cable and zip through the jungle, take a walk on the wild side along an ecosuspension bridge, or make a trip to the sloth sanctuary where you can have the chance to cradle one of these adorable, doe-eyed creatures.

If it’s diving you’re really interested in, take a daily one-hour ferry ride over to the smaller island, Utila. This is where the healthiest of reefs await those willing to dip their heads for a prolonged period of time. It’s also home to the Whale Shark and Oceanic Research Centre (WSORC), which opens its doors year-round for those wishing to take internships with their resident experts, whether you have a scientific diving background or not.

Utila is a teeny island in comparison to its neighbor. Here, almost the entire population is concentrated at the harbor. Its quaint and colorful Caribbean-style cabins, perched on stilts above lapping ocean waves, give the town an almost cartoon feel. Walking along the island’s main street, you quickly get a sense that this is a small and close-knit community, and once you’ve picked a bar to return to a couple of times, the locals will treat you like you’ve lived there your whole life.

Almost nowhere on the inhabitable side of the island is outside of walking distance, which is why there are no vehicles with bigger engines than quad bikes. Those who don’t want to march their family from beachside bungalow to the harbor can rent the island equivalent of a station wagon—a golf cart that fits a family of six.

To explore the majority of the rest, a boat is necessary, as the vast percentage of the land is covered with impenetrable mangroves. As you sail around the headlands, a keen eye can spot a number of mansions partially concealed by the overgrowth. Most of these are rentable for a very reasonable price, however, in doing so you will be entirely cut-off from civilization until the boat returns.

For me, the pièce de résistance of the entire Bay Islands can only be found by venturing to the far southwest, where you will find peels of paradise. Some of the minuscule islands have been developed to include a large lodge with bedding for up to 10 people. These are rentable for approximately $100 per day and night, which means you can have your own personal chunk of the Caribbean for just 10 dollars a head! You won’t find these reef-lined properties on any bed and breakfast websites. Instead, you’ll have to speak with Utilians at WSORC or ask around the bars for info.

Imagine, as the sun sets in spectacular form, blue melting into orange, red fading into pink. Nobody else around to witness this miracle of nature but you and your family sitting in front of a crackling campfire on your own private beach. The first evening stars begin to pinprick the darkening blanket above, and as the waves slosh to shore, you notice flashes of phosphorescence in their crest, taking a stand to see a turtle, streaked in blue, streaming through the clear Caribbean Sea.

This is a truly magical place. The kind of vacation usually enjoyed only by billionaires.

The 15 Best Islands in the World to Retire On