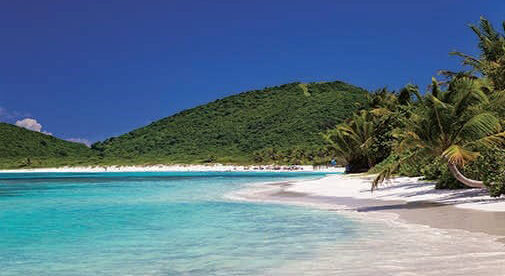 Picture yourself living on Isla Culebra, Puerto Rico. Financially, it might well be worth your while. ©iStock/cdwheatley.

I moved to Puerto Rico in mid- 2016. After my first visit in 1993 for a speaking engagement, I was enchanted and began visiting often. In 1995, I bought a major property on the Puerto Rican island of Culebra.

The weather in Puerto Rico is actually less extreme than in Florida, where I lived before. The temperature range 98% of the time is between 69 F and 92 F. In contrast, I lived through many 98 F to 99 F days in Miami and Tampa.

The only First-World city in the Caribbean.

In the capital city of San Juan and throughout much of Puerto Rico, English is widely spoken, especially in the tourist and “gringo” areas where most foreigners would choose to stay or live. The people are very likeable, as long as you don’t expect them to get things done for you at gringo speed. The only thing that could force me to leave at this point would be serious health challenges. The medical system is not quite as good as in Florida or most of the U.S.

I like this place and it suits me. I especially like the very low tax rates for businesses that qualify, even though I moved here without the benefit of these rates, and only got them afterward.

For a more objective look at Puerto Rico, I’ve included here a simple chart that provides a way to get a quick read on its economy, both past and future. Charts provide a good look at what’s happening economically for any given country in the world. This one shows what I call the Spending Wave, which looks at total workforce growth and projects future growth.

For developed countries like the U.S., the Spending Wave simply lags the immigration-adjusted birth index forward 47 years for the peak in spending of the average household. That metric tracks and projects economic growth for decades ahead. To project the Spending Wave for emerging countries, I use workforce growth, which is just as easy to track and project.

My Spending Wave chart for Puerto Rico shows that the workforce has been on a plateau since 2005 and that a long, sharp decline will follow after 2020. If trends in outmigration and births don’t change, then the territory could lose half of its workforce by 2100. This is obviously a big negative. But it is the very reason that Puerto Rico gets so much financial support from the U.S. as an official American territory. Without it, Puerto Rico would be in deep trouble.

On the other hand, the curse of association with the U.S. is precisely that Puerto Ricans are U.S. citizens and can freely move to the U.S. as easily as someone in Florida could move to New York—and they do. Young people have been moving away from Puerto Rico for better job opportunities since World War II. Now, older Puerto Ricans are moving out even faster, as they retire and realize that their grandkids are in the States (in Florida, New York, or New Jersey, typically).

That brings me to the best advantage of Puerto Rico for those looking to live or retire in the Caribbean. The capital city, San Juan, is the only large, First-World city in the Caribbean. Most countries become more affluent through urbanization, as cities allow for greater specialization of labor and job opportunities and urban pay rates typically are three times those of rural wages in emerging countries. Puerto Rico has a higher standard of living and culture now after it got rich quickly, going from an emerging country to a developed one in just 25 to 30 years, but after it was already 93% urban. I’ve never seen this happen before (although I’m sure there are a few minor exceptions in tax-advantaged or tourist-attracting areas somewhere).

Another shocker for me was that 46% of Puerto Rico’s GDP is in manufacturing. The great majority of that is in pharmaceuticals and medical technologies, as a result of the greatest stimulus program from the U.S. in Puerto Rican history. That program brought high-paying jobs. Another 20% of GDP is in finance and real estate. So, 66% of total GDP is derived from higher-wage industries. The pharma jobs will hold up better, because Puerto Rico exports medicines to the U.S., which has an aging Baby Boomer population. 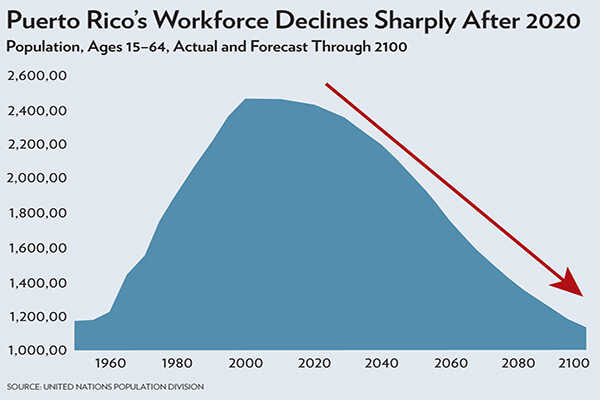 Maybe Act 20 and Act 22 tax incentives (see box below) will help save Puerto Rico’s declining demographic trends and attract new businesses, capital, and jobs. Maybe more U.S.-based Puerto Ricans will move back home as the U.S. economy continues to weaken (faster than the Puerto Rican economy). I am actually more worried that the tax program could be cancelled or curtailed if it becomes too popular among the gringos and Puerto Ricans react to it on a higher level.

But most of all, Puerto Ricans need to encourage more people in North America to vacation and consider retiring here. How are you going to fall in love with the territory if you don’t come and spend some quality time here?

For people smart enough to consider moving here for the best tax program in U.S. history, there are a number of neighborhoods that work well for us “gringos.” The Ritz Carlton Reserve in Dorado is a popular, high-end gated community 30 minutes west of San Juan with a golf course, beach sports, and restaurants. However, prices have been going through the roof since I moved here in 2016.

There is a larger country club development 50 minutes southeast of San Juan: Palmas del Mar, with about 700 homes and more space to expand. This is where I am about to buy a house currently. The hottest area in San Juan is Condado. I like the far west and east ends of Condado, from the Vanderbilt Hotel up to the causeway to the west; and from The Ashford hospital to the east.

Retirees can consider the laidback islands of Culebra and Vieques. Both have stunning, uncrowded beaches.

AND THEN THERE ARE THE TAX ADVANTAGES

After I moved to Puerto Rico in mid-2016, I figured out how to qualify for the Act 20 and Act 22 tax advantages (see: Oeci.pr.gov/en/ Pages/StatutesRegulations.aspx). I didn’t expect to be able to qualify, but some of my newsletter subscribers helped me to see how that could work. After settling in, I applied for and acquired Act 20/22 status… so I am now a resident of Puerto Rico, yet still a full U.S. citizen.

Here’s a quick summary of what this astounding tax program for Americans involves:

Qualifiers thus far have been grandfathered in typically for 15 years—so act as soon as you can if you are interested, as this program could be curtailed or amended at any time.

The experts here say that Act 20, which offers business taxes at 4%, is likely to be extended longer than Act 22, which offers zero capital gains taxes for short-term traders and investors.

You must be in this program for three tax years. If you move back to the U.S. before that, you must pay back all of your tax savings.

One important thing that most people don’t understand is that after the initial six months and three days of living in Puerto Rico, a person isn’t taxed the same as if, say, they lived in Florida, paying state income taxes only to Florida. If you’ve technically moved to Puerto Rico, the more time you spend away, in the U.S. or overseas, the more your taxes will shift back toward the U.S. (after certain allowances). That’s where it gets more complicated. You’ll need good counsel on how it will work best for you or your business.

I still pay more taxes to the U.S. than to Puerto Rico, but I also save substantially. The right business or individual could save a lot more.

Regardless, I moved down here anyway, and I’d do it again. I like it that much!