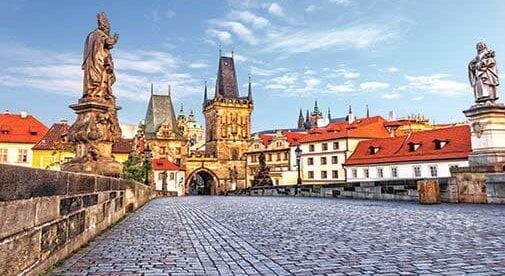 Atmospheric and affluent, Jeff’s home base of Prague allows him access to world markets. ©Anton Aleksenko/iStock.

On May 9th, I woke to an unexpected money-making opportunity. An email had arrived overnight. What’s more, it wasn’t from the widow of a Nigerian oil minister secretly trying to move $40 kajillion out of west Africa by way of little ol’ me.

This particular email offered me access to a new cryptocurrency that was going public. As a knowledgeable crypto investor (I’ve built crypto mining rigs and currently own more than 70 crypto projects) I’d done some research on this particular cryptocurrency. I knew I wanted it in my portfolio. In fact, I’d tried to buy it during the first three rounds of a new-coin-listing lottery and missed out every time because demand was so high.

But here was the email, offering me fourth-round access. I jumped at the chance. I spent $250 buying 1,250 tokens at $0.20, the coin’s initial price in its original three rounds of funding. And here’s why that’s relevant: When I was given access, the coin was already trading publicly at $17 each…meaning that my $250 investment was instantly worth more than $21,000.

Here’s the real story, though: Had I not had proof that I’m a resident of the Czech Republic, that email would have been meaningless. If I’d just been a typical American, my passport would have disqualified me from the offer.

It’s one of the more annoying characteristics of being an American. Financially, we’re shunned by the rest of the world.

Whether it’s banking, opening an overseas brokerage account, or access to opportunities such as my $21,000 crypto play, Uncle Sam is an albatross around our neck. He either paternalistically prevents us from investing our money as we see fit, or he imposes such numbingly burdensome rules that financial companies see Americans as liabilities to actively avoid (rather than as welcome clients).

It wasn’t always this way.

Back in the early 1990s, I opened my first overseas brokerage account in Auckland, New Zealand. I did it from my home in Dallas, Texas, by way of emails and faxed paperwork. By the early 2000s— after the internet had introduced online account-opening procedures—I was operating from bank and brokerage accounts in Australia, Singapore, Hong Kong, South Africa, the United Arab Emirates, Egypt, Romania, and elsewhere.

Not a single firm ever balked at my U.S. passport.

And then along came FATCA, the Foreign Asset Tax Compliance Act. Uncle Sam introduced this legal overreach in 2010. Supposedly, it was a way to address the perception that average Americans regularly use offshore accounts in large numbers to evade taxes (spoiler alert: they don’t). Ever since then, Americans have been unwelcome in financial offices around the world.

In some cases, I was asked to close accounts that I’d operated from for years. And I’m certainly not the only one. Americans all over the world have lost access to basic checking accounts. That’s simply because local banks want nothing to do with the draconian penalties the U.S. imposes on foreign banks if their “T”s and “I”s aren’t correctly crossed and dotted with regard to U.S. clients. Easier to tell an American to scram than run afoul of a heavily indebted nation desperate to find extra income by hook or by crook.

Back in 2019, the Government Accountability Office (GAO) issued a report noting that, nearly a decade on, FATCA has proven severely flawed. Data quality is so bad, for instance, it has limited use, the report noted. More shocking: FATCA was responsible for a 178% increase in the rate of Americans renouncing citizenship between 2011 and 2016. Since then, the numbers have increased to record levels.

A government’s role is not to protect us from ourselves and the opportunities we willingly want to pursue. Yet, that’s precisely what Uncle Sam does.

Take Reg. S, for instance. It’s a law put in place years ago after some U.S. companies were creating offshore entities that were then selling unregistered securities back into the U.S. without going through proper registration requirements. But in creating Reg. S, Uncle Sam basically used a sledgehammer to fix a problem better addressed with needle-nose pliers. The result: An entire class of legitimate, foreign-listed stocks that Americans cannot invest in—even though there was never an instance of foreign companies bypassing proper channels to reach U.S. investors.

What all of this means is that as Americans, we miss out on global opportunities to grow and protect our wealth, right at the moment in history when the rest of the world increasingly offers such opportunities.

Specific to the U.S., there is a political system that, as the last several years have proven, is under severe strain. There is a fiscal and monetary system that is so debtaddled that the U.S. dollar, I’m predicting, will be the source of an economic/currency crisis before this decade is over. There is a widening social divide that threatens to cleave the country apart. There is a stock market and a housing market that are both overvalued and skating along the thin edge of disaster.

Any—or all—of those has the power to crush your plans if all your wealth is stashed away within U.S. borders.

Overseas, however, exists an abundance of opportunities we simply don’t have access to in the U.S. And because of the regulatory briar patch that is American securities law, companies like that cryptocurrency-listing firm I mentioned earlier explicitly refuse to allow U.S. residents to apply for access to new-coin offerings.

All of which are reasons why proof of overseas residence is yet another benefit in the “live and/or work abroad” movement that’s gathering steam.

Consider for a moment a service as basic as banking.

Try to find an account in the U.S. at a local bank, a credit union, or even a national banking giant like Wells Fargo that gives you easy access to a multicurrency account online or through a smartphone banking app. They’re a challenge to find.

Yet, both of my bank accounts in Prague offer this as a basic, everyday service. I can pop into my bank app, and with a click or two, add a foreign currency sub-account to my main account. At the moment, my primary bank account holds Czech crowns, euros, dollars, and Norwegian krone. And I can move those currencies back and forth easily and within seconds.

Opportunities we don’t have access to in the U.S.

Or consider something a bit more advanced—a brokerage account.

Because I have proof that I am a local resident of the Czech Republic, I have access to a local brokerage account that I otherwise would not have if my only form of ID was my U.S. passport.

In turn, that account allows me to trade all over Europe, in markets I could never reach from the U.S. I can trade in the Czech Republic, and Eastern and Central Europe, from Russia to Slovakia to Hungary and Poland.

You’re simply not going to find that access anywhere online with a U.S. brokerage firm.

5 Smart Ways to Bank and Invest When You’re Overseas