With an estimated 89 million travelers crossing her borders, France was the most visited country in the world in 2017. I’ve been living in this delightful country since 2010 and have been fortunate to visit many of its regions. So this news hardly came as a big surprise. Wherever you decide to go in France, you’ll find that every corner is beautiful. Paris will always be Paris, timeless and unforgettable. But other regions have special charms of their own. Lorraine and Alsace are known for their German influences; they’re dotted with canal-lined villages, each more beautiful than the next, and which turn into picture-postcard snapshots of fall when the changing colors dot the countryside. In the middle of France is the Loire Valley, with its châteaux, miles of vineyards, and exquisite scenery. And if it’s wine touring you’re looking for, a trip to Burgundy will absolutely sweep you off your feet. Then there’s the south of France, with its world-famous beaches and the natural beauty that has captivated generations of visitors—painters such as Picasso and Van Gogh among them.

Since there’s so much to see and do, here are some money-saving ideas that will help you get the most out of your vacation and experience the best of France. 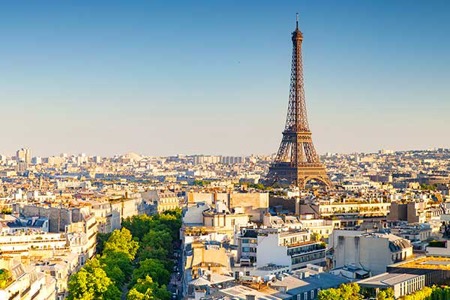 If you plan to visit Paris, it’s important to book your hotel well in advance and to take advantage of off-season rates. Traveling in early fall is a great way to score deals at local hotels and to enjoy warmer temperatures at the tail end of the tourist season. My favorite place to stay in Paris is a stone’s throw from the Eiffel Tower, in the neighborhood of Rue Cler. This area feels like a “village within a city.” You get to experience all the charm of Paris, while staying in a less crowded, slower paced corner of the capital. You can book a private apartment with a minimum five nights’ stay, but the alternative is to stay at one of the area’s small hotels. Pricey as this district (the 7th arrondissement) can be, there are still some good deals on Booking. com if you plan far enough in advance. Hotel Royal Phare and Hotel Muguet have rates at $149 and $156, respectively, for double rooms. Considering that a three star hotel will run you more than $325 a night, this is quite a bargain.

Outside Paris, in the provinces, you can save on accommodation by booking what are known as gîtes—self-catering apartments. This is an especially attractive option for families. On a recent trip to Beaujolais, I booked a gîte for the same price as a hotel room I’d booked in the same village the year before: $106. The apartment was twice the size of the hotel room, had a fully functioning kitchen (dishwasher and washing machine included), a small living room with a sofa bed, a queen-sized bed, and a separate bathroom. I spent several cozy nights in— cooking, drinking wine, and enjoying the extra space and money I saved on dinners out. You can find a listing of gîtes throughout France at Gites-de-france.com.

Chambres d’hôtes—French B&Bs—can also be an affordable option…if you skip the breakfasts. Some Chambres d’hôtes charge up to $17 for your morning meal, whereas most cafés offer breakfast deals for around $6 to $8. This includes a choice of coffee, a glass of juice, and a croissant, pain au chocolat, or half-baguette with jam. An even cheaper option is to pick up a coffee ($2.50) and a croissant ($1) at a local bakery.

Some other sure bets for finding cheap accommodation include staying with a well-known hotel chain. Formula 1 hotels are indeed quite basic, but they are one of the cheapest options around. Another good chain to try is Ibis. These hotels are very centrally located and also offer self-catering apartments, which can be particularly attractive for families. The site Appart’City (see: Appartcity.com) is also gaining popularity by providing “the comfort of an apartment with the services of a hotel.” Just type in your selected city to view its offerings.

Also, you can score a great deal on a home-swap arrangement, which many French families are keen to do. By swapping your home abroad with a French family, you both save on cost—with an added benefit of having access to their “hometown” network. You can find such exchange opportunities on the French website Le Bon Coin. (See: Leboncoin.fr.) Just select which region you’re interested in visiting and peruse the exchanges. Longer term vacation rentals on the Bon Coin site are also interesting. For example, you can rent a one-bedroom apartment in Aix-en-Provence during the summer months (when the university students are away) starting at $750 a month.

Another great site to find home rentals, exchanges, and even housesitting is Sabbatical Homes. (See: Sabbaticalhomes. com.) You’ll need to select your desired accommodation (that is, rental), and then enter the city in France where you’d like to stay. A recent search for Paris found 371 rental, 57 exchange, and 10 housesitting opportunities. 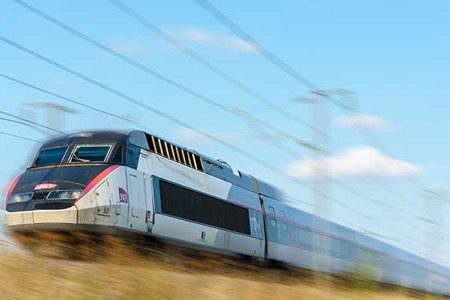 France provides many affordable ways to move around the country. I prefer to travel by train. If you book far enough in advance, the rates can be very low. A ticket from the southern town of Toulon to Paris can run you more than $105 one way, but I’ve scored tickets for $41 each way by booking around two to three months in advance.

Interestingly, sometimes the difference between a second-class and a first-class ticket on French trains is very little. I’ve upgraded to first-class several times by paying just an additional $12 to $14. And boy, was it worth it. There’s nothing like rolling through the French countryside in luxurious comfort.

If you’re traveling between cities, for example between Marseille and Nice, spend a few extra euros and take a TGV (high-speed) train, rather than the standard intercity offering. The TGV train will take you from point A to point B with minimal (one or two) stops in between. Its intercity counterpart will stop at practically every city along that same route. And while the timetable may show a difference of only 30 minutes between the two trains, intercity trains are, unfortunately, quite often late—sometimes by hours. Spend a bit extra for the TGV, and you’ll make up your investment in longer sightseeing opportunities and less stressful travel.

A fairly recent addition to the travel scene is BlaBlaCar. (See: Blablacar.fr.) It’s a car-sharing program that lets you travel between two destinations at rock-bottom prices. The concept is simple: You type your desired destination into the search box, and BlaBlaCar links you to drivers who are making that same trip. You share travel expenses (gasoline costs, freeway tolls, and the like) and gain a bit of companionship in the process. Trips from Paris to Lyon start at $28, Bordeaux to Toulouse comes in at $15, and Nantes to Rennes is very affordable, at $7.

Renting a car is also an attractive way to tour around France, and it gives you a great deal of freedom. I often travel by car, and I’ve noticed that the quickest way to blow the budget is by not planning ahead for mealtimes. Although well-placed and well-organized, French rest stops tend to be expensive places to eat. And very few offer the kind of quality meals we’ve come to expect from French cuisine.

Packing a lunch to eat on the road is a great money-saving idea, and you’ll even find “picnic-only” rest stops, with many French families doing just that. The picnic is a very large part of French culture, and French bakeries, pâtisseries, and supermarket deli counters all cater to this penchant for taking your meals on the go. In the center of my village, Ollioules, you can spend a quick 15 minutes hopping from one shop to the next to build your own picnic. At the bakery, we pick up a few mini quiche Lorraine and a baguette, head to the local deli for a selection of cold cuts, and pick up either fresh fruit at the market or a dessert at the pâtisserie.

You can also build your own meal from the numerous options at the deli counter of the local supermarket. Put together a fine lunch out of any of its numerous salads, hot dishes, and beautifully prepared desserts. For example, you can get a Niçoise rice salad, some meat-stuffed tomatoes (tomates farcies), and then pop over to the pastry counter for a strawberry and cream parfait. And don’t forget to throw in a traditional French baguette. This meal will come in at less than $25 for two people. All major supermarket chains—Intermarché, E. Leclerc, Auchan, and Carrefour—have deli counters.

An even cheaper option is to go with the national staple of roast chicken and home-style potatoes. I serve this meal about once a week, topped off by a few seasonal fruits for dessert. A high-end (label rouge) free-range, grain-fed chicken costs me $9, and the potatoes go for around $6. You can also pick up this combo at most outdoor markets. Since the chicken is fresh-roasted the same day, you can’t beat the tenderness and quality of the meat. 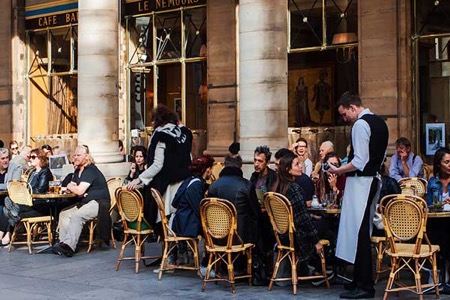 There are several other ways to save on mealtimes and still eat very well in France. For meals out, especially lunches, try to stick with a prix fixe, or fixed menu, option. A typical fixed menu gives you a starter (entrée), main dish (plat), and dessert for a very reasonable price—ranging from quite low ($17) for local bistros to higher end options ($40) for semi-gastronomic restaurants. You’ll have either two options for each course (say, a goat cheese salad or French onion soup for your starter, and grilled sea bass or boeuf Bourguignon for your main dish) or only one option. You can then tack on a table wine—these are generally quite good in France—for around $7 to $8. These fixed menus are often written on an ardoise, or large chalkboard, and will usually be carted out by your waiter as a dining suggestion. If you do the math, paying for each of these dishes separately would cost you close to double the price—considering that most starters begin at $9 each and main dishes start at anywhere from $12 to $17, not to mention the desserts. Restaurant owners save by not buying excess product and by paring down their menus. And while you may compromise a bit on choice, the long-term savings can’t be beat.

One last word on food choices: Take care when choosing a restaurant that has its menu translated into English. Often these are tourist traps that jack up their prices for visitors. And even though France is the world’s culinary capital, it is not unheard of for these restaurants to use frozen or packaged food. Any well-meaning waiter can tell you the English translations for a restaurant’s menu items.

Finally, a sure way to save money in France is to plan your trip carefully and decide how long you’d like to spend in each location. Many hotels decrease their rates for longer stays, and “setting up house” for a while in a quaint village or countryside town may just be one of the best ways to experience the country.

Everything You Need to Know about Paris